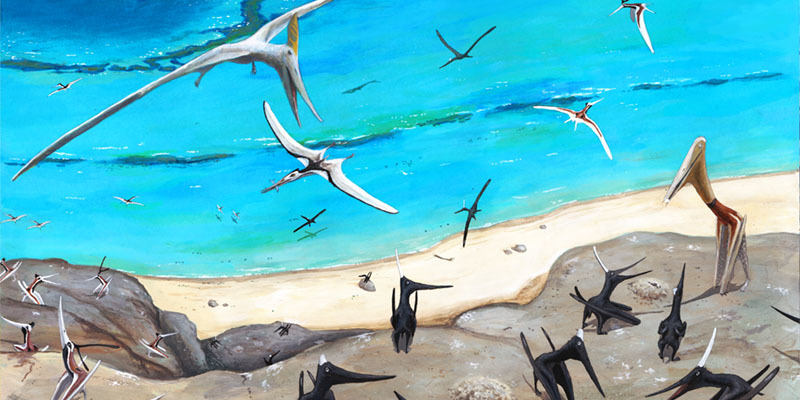 All Posts
Two Moroccan phosphate mines have yielded dozens of specimens from at least seven different pterosaur species in three different families. The high diversity of sizes and ecological roles found there suggests that pterosaurs remained competitive with birds at medium and large body sizes until the mass extinction at the close of the Mesozoic Era.

Pterosaurs were flying reptiles living in the Mesozoic Era. Cousins of dinosaurs, their wings were formed by a skin membrane stretching from an extremely long ring finger to their ankles. They went extinct in the Cretaceous-Paleogene Extinction event, along with the non-avian dinosaurs, marine reptiles, and a host of other animals. Previous research had suggested that pterosaur diversity dwindled in the final 50 million years of the Cretaceous Period, possibly as a result of competition from birds.

Newly discovered fossils from Morocco described by Nick Longrich, David Martill, and Brian Andres throw this idea out the window. They describe fossils from seven species in three families discovered in rocks that were formed in the last one million years of the Mesozoic Era. More than 200 specimens were collected, ranging from isolated bones to partial skeletons, and they represent the largest collection of pterosaurs from that period of time from anywhere in the world.

The pterosaur fossils were all found in the Couche III beds at the Sidi Daoui and Sidi Chennane phosphate mines near Khouribga, Morocco. They show a wide variety of sizes and lifestyles, representing a degree of diversity previously unseen in such late-living pterosaurs. There were four marine fishers from the pteranodontid and nyctosaurid families with wingspans between about 2 and 5 meters (6.5 and 16.5 feet). There are also three species of azhdarchids that hunted terrestrial or shallow water prey like living herons, storks, and shoebills. Their wingspans ranged from 3.5 to 9 meters (11.5 to 30 feet) and they likely focused on different prey considering their great disparity in size. 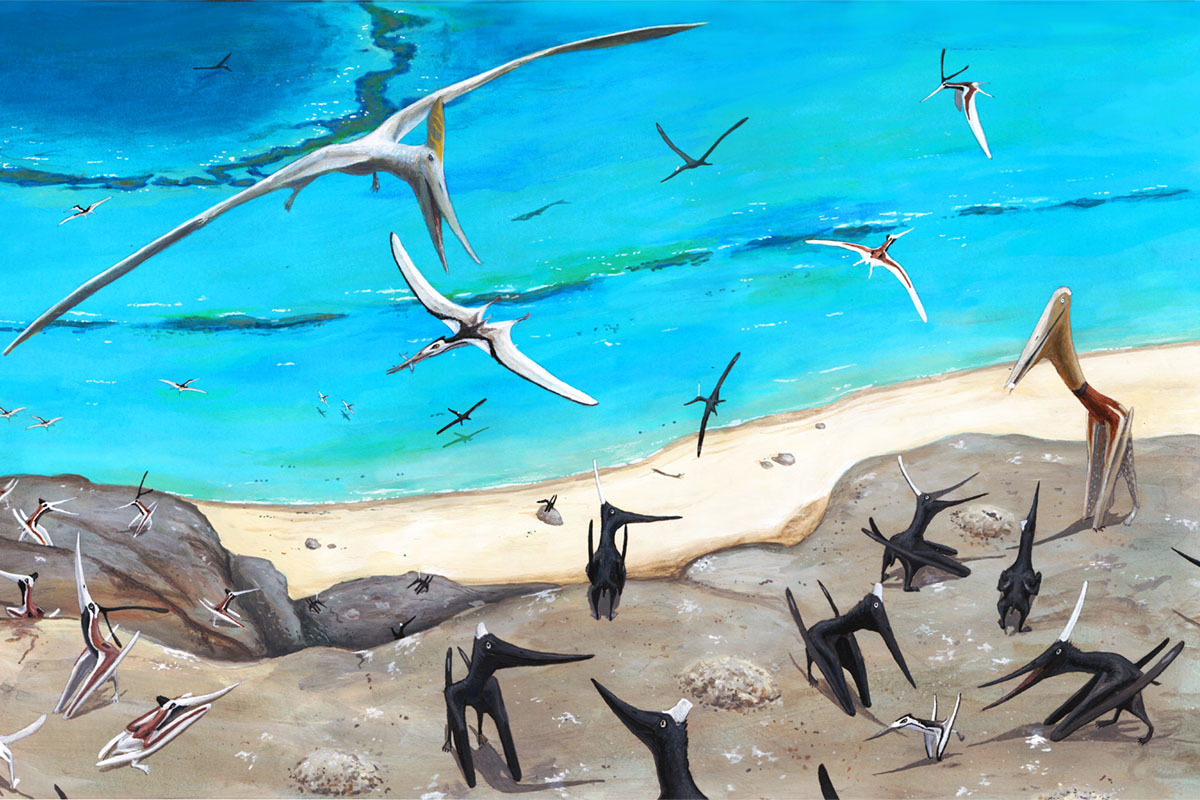 A view of the pterosaur community of Sidi Daoui, Morocco. In the air, a Tethydraco regalis chases a much smaller Alcione elainus hoping for an easy meal. On the rocks, a Phosphatodraco mauritanicus harasses a mixed group of Simurghia robusta and Barbaridactylus grandis.
Joschua Knüppe

In addition to describing this remarkable pterosaur assemblage, Longrich and colleagues tested whether pterosaur diversity was actually in decline in the Late Cretaceous, or if the apparent decline was a result of preservational bias. To do this they looked at the functional diversity of Late Cretaceous pterosaurs from around the world. Functional diversity takes into account differences in diets and method of feeding, as well as different modes of locomotion, body size, and habitat to estimate the number of ecological niches that were occupied by pterosaurs over time.

Their results were surprising. They found that not only were there much larger numbers of pterosaur species in the final 10 million years of the Cretaceous than previously appreciated but that pterosaurs were actually increasing their functional diversity as the Mesozoic came to a close.

Furthermore, rather than gradually losing out to birds over the course of the Cretaceous, they found that pterosaurs remained dominant in all ecological niches for wingspans of 2 meters (6.5 feet) or more. Study co-author Brian Andres said, “The Moroccan fossils tell the last chapter of the pterosaurs’ story – and they tell us pterosaurs dominated the skies over the land and sea, as they had for the previous 150 million years.”

Longrich and colleagues found that the apparent decline in pterosaur diversity is due to a bias in the fossil record called the Signor-Lipps Effect. The bias exists because of the low likelihood that any individual organism will become a fossil. The last living individual of any lineage is unlikely to be fossilized, so the extinction of a lineage will always appear to happen earlier in the fossil record than it happened in reality. This effect is exaggerated in rare or delicate organisms like pterosaurs, with lineages appearing to become extinct millions of years before their actual extinction.

Lead author Nick Longrich describes why, “To grow so large and still be able to fly, pterosaurs evolved incredibly lightweight skeletons, with the bones reduced to thin-walled, hollow tubes like the frame of a carbon-fiber racing bike. But unfortunately, that means these bones are fragile, and so almost none survive as fossils.”

Several other lineages of pterosaurs that appear to go extinct in the middle part of the Cretaceous may have actually lasted until the mass extinction that ended the period. They include the fruit-eating tapejarids and carnivorous thalassodromids, both toothless relatives of the azhdarchids. A third possible surviving lineage is represented by Piksi barbarulna, a tiny forest-dwelling pterosaur known from fragmentary remains that lived about ten million years before the mass extinction. Piksi may have competed directly with birds and appears to be distantly related to the pteranodontids and nyctosaurids.

These new Moroccan pterosaur species were discovered in rocks deposited under the ancient Atlantic Ocean. At the time, the sea was teeming with fish, and the site has already yielded the remains of marine reptiles like mosasaurs and plesiosaurs. The nearby African mainland was farther south than it is currently, but was still hot and dry, probably resembling the mountainous coasts of modern Yemen and Oman.

The newly described species include a large pteranodontid named Tethydraco regalis. It’s only known from a few isolated limb bones, but Longrich and colleagues were able to estimate its wingspan was about 5 meters (16.5 feet). Pteranodontids were crested toothless marine fishers that soared above the waves, probably plucking fish from near the surface.

The three other newly described marine fishers are all nyctosaurids; also crested and toothless, and closely related to pteranodontids. Their wing bones show some differences compared to pteranodontids, and may have had different flight styles. The smallest species, Alcione elainus, had comparatively short and robust forearms and hands, possibly indicating rapid flapping flight, or perhaps an adaptation to diving into the ocean like a kingfisher. It’s known from a partial skeleton, and numerous referred specimens. Longrich and colleagues point out that there is a lot of variation seen in the Alcione specimens, and they may actually have been two or more closely related diving nyctosaurids at the site.

A closely related, but larger species of nyctosaurid was named Simurghia robusta. Although only known from a single humerus, its wingspan could be estimated to be about 4 meters (13 feet).

With a wingspan of about 5 meters (16.5 feet), Barbaridactylus grandis is the largest nyctosaurid from the site. It’s known from a partial skeleton including portions of the jaws, as well as some more material from other individuals. Like Alcione, it also appears to have shortened wings but was found to more closely related to a giant Brazilian species called ‘Nyctosaurus’ lamegoi.

The final three species were all azhdarchids; medium- to large-sized long-necked toothless predators of small terrestrial prey. Azhdarchids are found in Upper Cretaceous rocks on nearly every continent, and prior to this discovery, were thought to be some of the only pterosaurs living at the time of the mass extinction. Their finds include more material of the previously known medium-sized Phosphatodraco mauritanicus, with a wingspan of about 6 meters (20 feet).

The final two species remained unnamed but were shown to be distinct from Phosphatodraco and each other. One of the unnamed species is known from a single neck vertebra from an adult individual. It’s smaller than adults of Phosphatodraco with an estimated wingspan of about 3.5 meters (11.5 feet) but otherwise similar to the giant Quetzalcoatlus. The final species, nicknamed the ‘Sidi Chennane Azhdarchid,’ is known from a partial ulna of a giant with a wingspan of roughly 9 meters (30 feet). Unlike some other giant azhdarchids, the ulna is remarkably slender and may be referable to Arambourgiania, a giant azhdarchid with slender proportions known from Jordan.

The remarkable phosphate mines of Morocco have greatly increased our understanding of pterosaurs in the last days of the Mesozoic. They show that pterosaurs were still going strong and dominated ecological niches at medium and large body sizes, and previous assumptions of a decline in pterosaur diversity were due to the imperfection of the fossil record.

The site still has much more to offer and may turn out to be one of the most important pterosaur graveyards in the world. Longrich suspects that the first seven pterosaurs are just the tip of the iceberg, saying, “I believe there are many more species to find.”