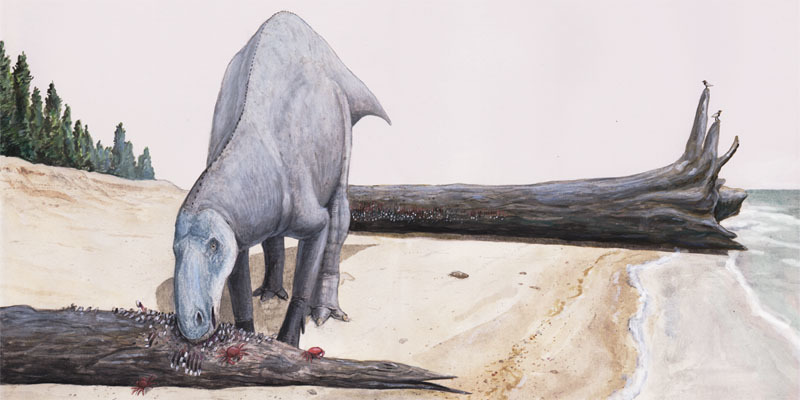 All Posts
Detailed examination of fossilized dung, technically known as coprolites, from plant-eating dinosaurs revealed two surprising things: large amounts of rotten wood, and crab shells. The coprolite producers, probably duck-billed dinosaurs are usually considered to be herbivores, and this behavior might have been related to egg-laying.

Among the least common but most informative fossils are fossilized dung, technically known as coprolites. Formed only under extremely favorable conditions, they frequently retain remnants of tough food items such as bones or wood fragments. Coprolites from herbivorous dinosaurs are usually full of conifer needles and wood from twigs. An accumulation of coprolites from Utah, USA shows something completely unexpected: rotten wood and crustacean shells!

In September 2017, paleontologists Karen Chin, Rodney Feldmann, and Jessica Tashman described the coprolite accumulations from the Kaiparowits Formation in Utah and compared them to previously described coprolites from the Two Medicine Formation in Montana. The new location yielded several different specimens from roughly the same area, but in different layers of sediment.

Both sites date from the Late Cretaceous Period, about 75-80 million years ago and had similar herbivorous dinosaurs: large duck-billed hadrosaurs and horned ceratopsians, as well as a variety of much smaller plant-eaters. The coprolites are far too large to be from anything other than hadrosaurs or ceratopsians, and Chin, Feldmann, and Tashman considered hadrosaurs to be the only possible producers. Although ceratopsians have strong jaws and teeth, only hadrosaurs have teeth capable of pulverizing wood. 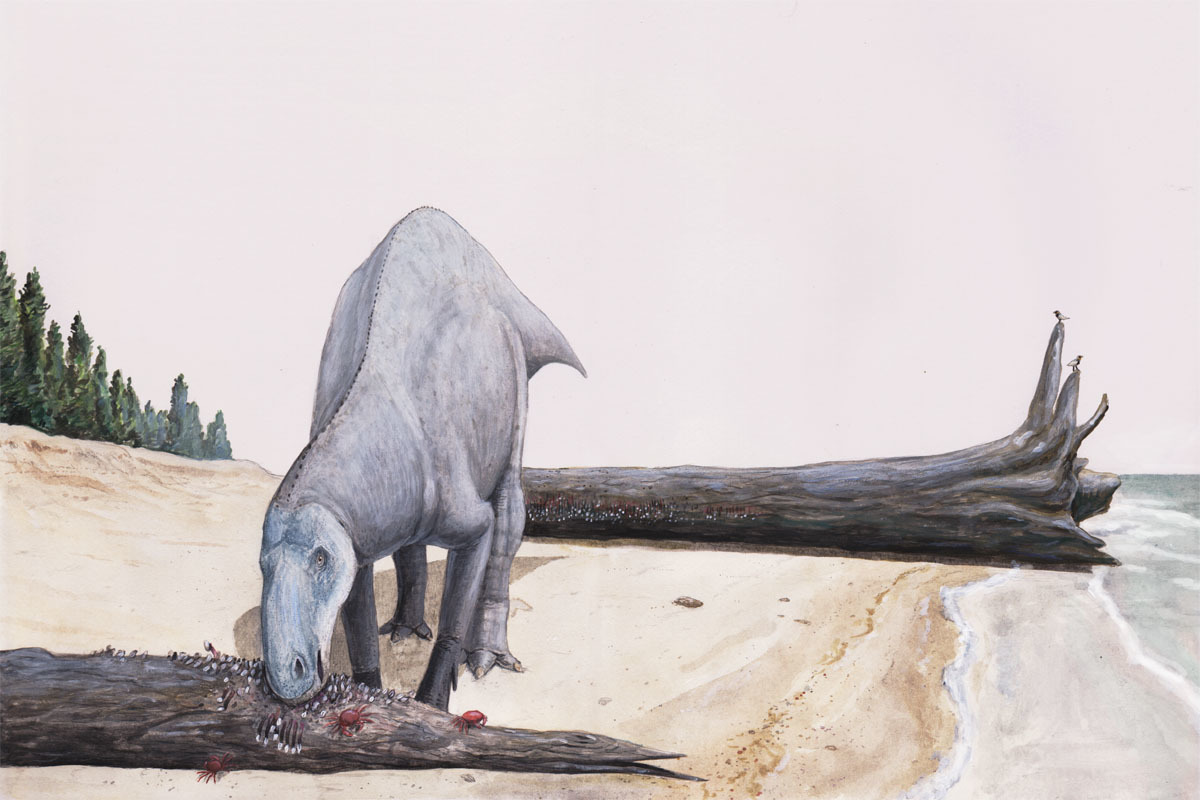 It may seem strange to think of herbivores eating meat, but it’s actually not that rare. Many large herbivorous mammals occasionally eat flesh, consume small vertebrates and invertebrates whole, or gnaw on a bone. This behavior is especially common in birds, of which only a few species are totally herbivorous.

Chin, Feldmann, and Tashman discussed several possible reasons for the strange coprolite contents. They note that the wood tissue had been partially decomposed by white-rot fungus, which produces rotten wood with a wet, spongy or stringy texture. White-rot decomposes a tough wood tissue known as lignin, and delignified wood has been experimentally shown to be much more digestible than fresh wood.

More importantly, rotten wood is an ideal habitat for huge numbers of invertebrates including slugs, snails, insects, and centipedes, among many others. The shell fragments found in the coprolites are broken and partially digested, but appear to be from a medium sized crab, similar to crabs found in contemporaneous rocks elsewhere in Utah.

In living birds, the selective ingestion of invertebrates, especially those with shells rich in calcium, is usually intentional and happens when the birds are deficient in protein and calcium. This is especially prevalent in nesting birds because laying eggs takes a great physiological toll on laying females.

Chin, Feldmann, and Tashman suspect that this strange feeding behavior in the hadrosaurs may also have been associated with nesting. They also point to the unusually large accumulation of coprolites in the area, with some very large specimens made from several different events. Use of communal latrines is common among nesting birds, and appears to have been the case in some nesting dinosaurs too.

The previously described coprolites from Montana also contain a lot of rotten wood remnants, but no crustaceans. It’s probable that the Two Medicine hadrosaurs were eating rotten wood for the same reasons, and may even have consumed smaller crustaceans that were completely digested.

This new find offers incredible and unexpected insights into the behavior of dinosaurs. Most probable hadrosaur coprolites have remnants of leaves and twigs, but these two accumulations of coprolites with weird contents shows that their diets were more varied than previously considered. Future finds will surely offer more surprises about dinosaur lives.