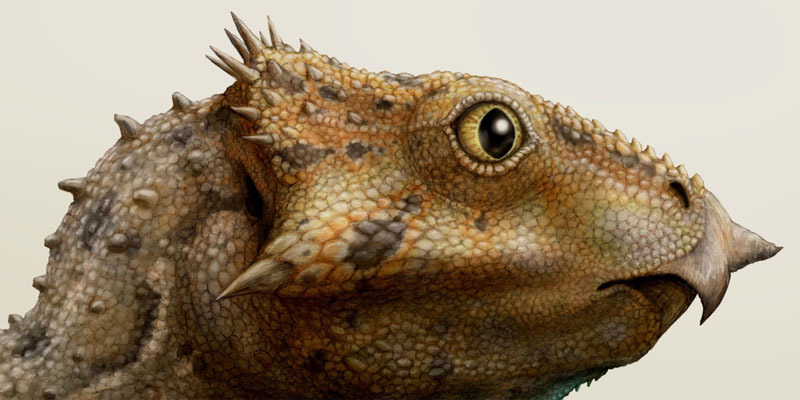 All Posts
This little pointy dinosaur with a sharp beak and spiky cheekbones shows how different waves of Triceratops’ relatives came from Asia.

Aquilops americanus is the oldest ceratopsian dinosaur found in North America. Its name means "American eagle face." Ceratopsians were a group of herbivorous, beaked and usually horned dinosaurs to which famous species like Triceratops belonged. Aquilops was a small and hornless early member of the lineage.

The 2-foot-long, 3-pound dinosaur may not have sported the impressive headgear of its later relatives, but it was no easy meal for predators. Apart from the sharp downturned beak from which the eagle comparison was taken, it also had a pointed protrusion at the front of its face and a prominent spike on the end of each cheekbone. Maybe Aquilops was a bad-tempered critter that gave carnivores some trouble.

This raven-sized ceratopsian didn’t look much like the extravagant, multi-ton Styracosaurus or Diabloceratops, but it had some characteristics that leave no doubt about it being part of the family. One of these is the presence of the rostral bone, which makes up the beak of ceratopsians and isn’t found in other dinosaurs. The little forward-facing spike at the end of Aquilops’ beak could be related to the nasal horn found in its bigger cousins.

The most interesting aspect of Aquilops, however, isn’t its uninviting visage. It’s that Aquilops seems to be much more closely related to Asian species than American ones. It is also 20 million years older than the second-oldest North American ceratopsian. Paleontologists believe this means different waves of ceratopsians immigrated from Asia into North America during the Cretaceous period, and Aquilops was the first of them.

North America and Asia were even farther away from each other 100 million years ago than they are today, as far as we know. The discovery of Aquilops in Montana means some kind of land bridge existed linking the two landmasses and allowing the migration of animals between the continents.