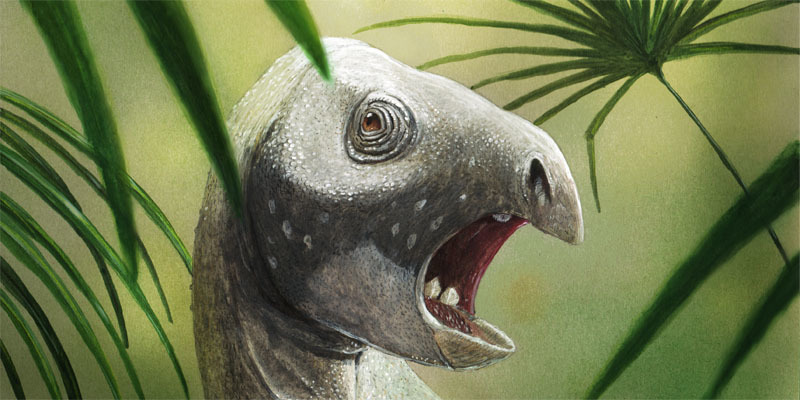 All Posts
Rhabdodontids are known from Cretaceous rocks in Europe. They evolved a unique way to break down fibrous plants: scissor-like jaws and teeth. Individual teeth lined up and worked together to form blade-like surfaces capable of slicing tough palm leaves.

Rhabdodontids are a poorly known lineage of small- to medium-sized plant-eating dinosaurs found in Cretaceous rocks in Europe. In 2017, paleontologists Pascal Godefroit and colleagues announced the discovery of a new species of rhabdodontid, Matheronodon provincialis, from 75-million-year-old rocks in Bouches-du-Rhône, France.

Matheronodon is known from a single right maxilla, the tooth-bearing bone of the cheek region of the upper jaw, as well as a few isolated teeth from the lower jaw. Although incomplete, the material is unlike any other dinosaur so far known. Its smaller relative Zalmoxes has ten or eleven tooth positions in each maxilla, but Matheronodon has just eight. This is a record low number for rhabdodontids and especially notable for an animal of its size. Matheronodon is one of the largest known rhabdodontids, with an estimated length of more than 4.5 m (15 feet).

The tooth crowns are flat and narrow; shaped like chisel points. The surface of the teeth was decorated with numerous low ridges, giving it a corrugated appearance. The eight teeth in the upper jaw were tightly packed and each chisel-point tooth lined up forming a blade-like surface. The teeth in the lower jaw were similarly arranged, so when Matheronodon bit the two blades worked like scissors, slicing through tough plant material. 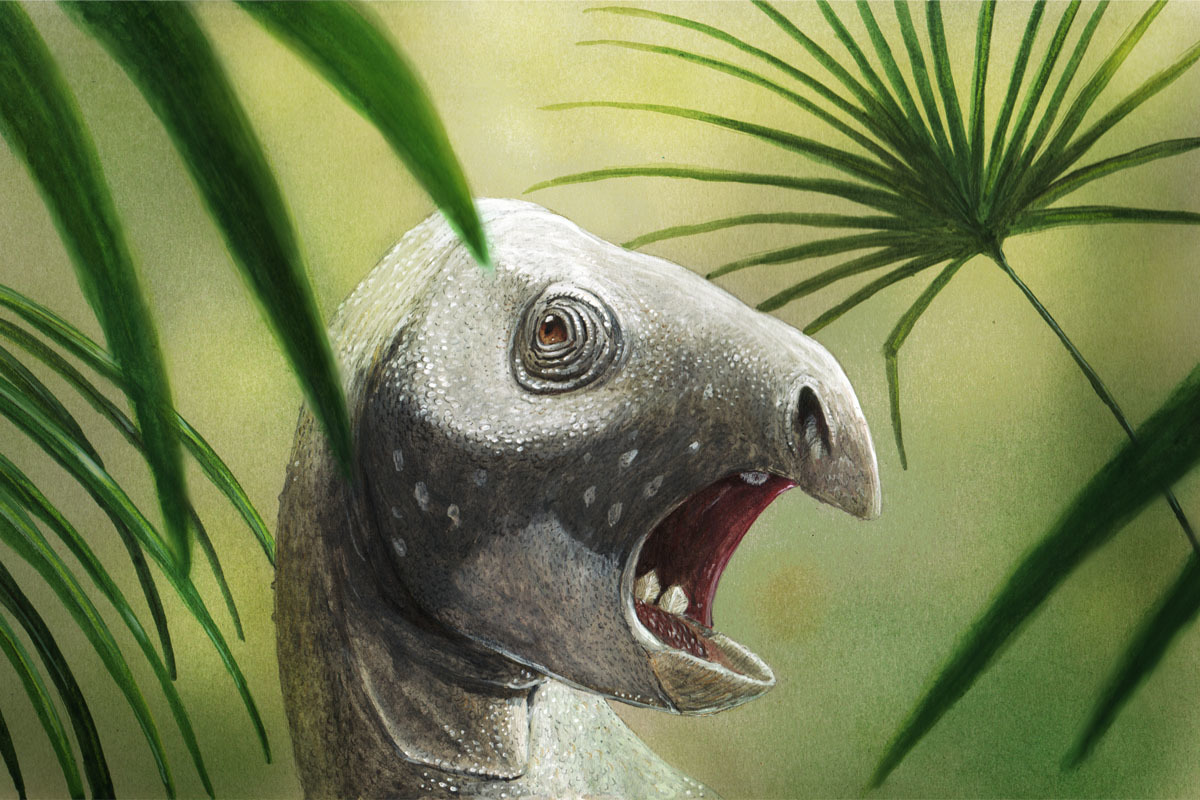 The teeth of the upper and lower jaws came into contact and formed a self-sharpening surface. Those in the maxilla grew in a staggered pattern, with every other tooth in the jaw the same age and either younger or older than adjacent teeth. This ensured that all eight teeth wouldn’t be shed at the same time.

Other rhabdodontids have superficially puffin-shaped faces with tall and narrow snouts. The back-ends of their skulls are extremely wide, housing powerful jaw-closing muscles. They were bipedal herbivores, capable of running on two feet at moderately fast speeds. Matheronodon differs from other rhabdodontids not only in the small number of large teeth, but the smaller area for attachment to the beak, maybe meaning a blunter snout than its relatives.

Although Matheronodon takes its teeth to an extreme, other rhabdodontids have similar, if smaller, chisel-like teeth that allowed their jaws to work like scissors. This is quite different from the dental batteries that evolved in their relatives the hadrosaurs, or “duck-billed” dinosaurs. Their jaws were filled with hundreds of small, closely-packed teeth that were locked together in a battery, forming a sort of super-tooth with a huge grinding surface. Instead of slicing like the rhabdodontids, the hadrosaurs ground and crushed plant material.

Godefroit and colleagues suggest that Matheronodon may have preferentially fed on plants with especially fibrous leaves like palmettos and other palm-like plants, using its scissor-like jaws to slice the tough material. On the other hand, hadrosaurs appear to have largely eaten conifers, grinding the needles and twigs in their dental batteries.

Matheronodon lived about 10 million years before the end of the Age of Dinosaurs. At the time, Europe was made up of many large islands, looking quite like modern Indonesia. During the last few million years of the Cretaceous, hadrosaurs first reached the European islands, replacing rhabdodontids in many areas. Godefroit and colleagues suggest that the replacement may be related to a change in plant life, but more information is needed to know with certainty. Further discoveries will surely tell us more about Matheronodon and the other rhabdodontids, including information on their evolution, diet, and interaction with hadrosaurs.