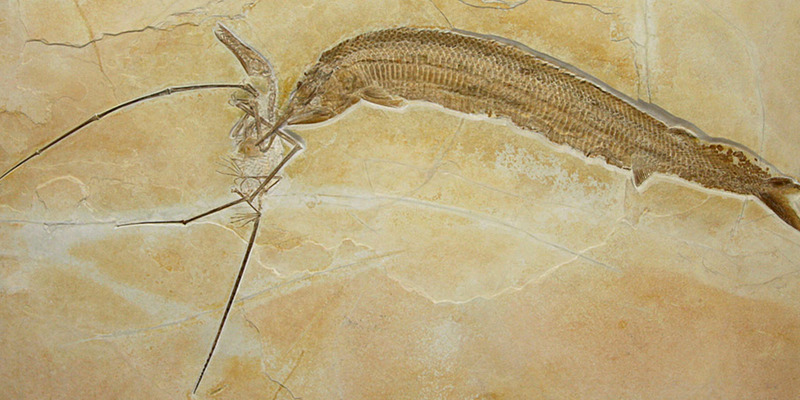 All Posts
A failed attack from a predatory fish on a pterosaur millions of years ago has resulted in a one-of-a-kind discovery.

Predator-prey encounters obviously happened all the time in Earth’s long history. After all, since the first carnivorous creature appeared in the oceans, animals have been eating one another to survive. However, finding direct evidence of such interactions in the fossil record is extremely rare.

Every fossil is a little miracle – a one in a million chance of all the conditions being just right for a dead organism to be preserved in rock for a long time. For two different animals to die and remain together throughout the process, the possibilities are even lower. That’s why a fossil found in the Solnhofen limestone of Germany is so exceptional.

The fossil, dated to the Late Jurassic Period, contains the fish Aspidorhynchus (‬”shield snout”) and the pterosaur Rhamphohynchus (“beak snout”) that got stuck together until their deaths. The fish’s long, pointy snout speared the pterosaur’s left wing, which got entangled in the fish’s teeth. Another, smaller fish, Leptolepides (“thin-scaled”) was also preserved inside the pterosaur’s throat. 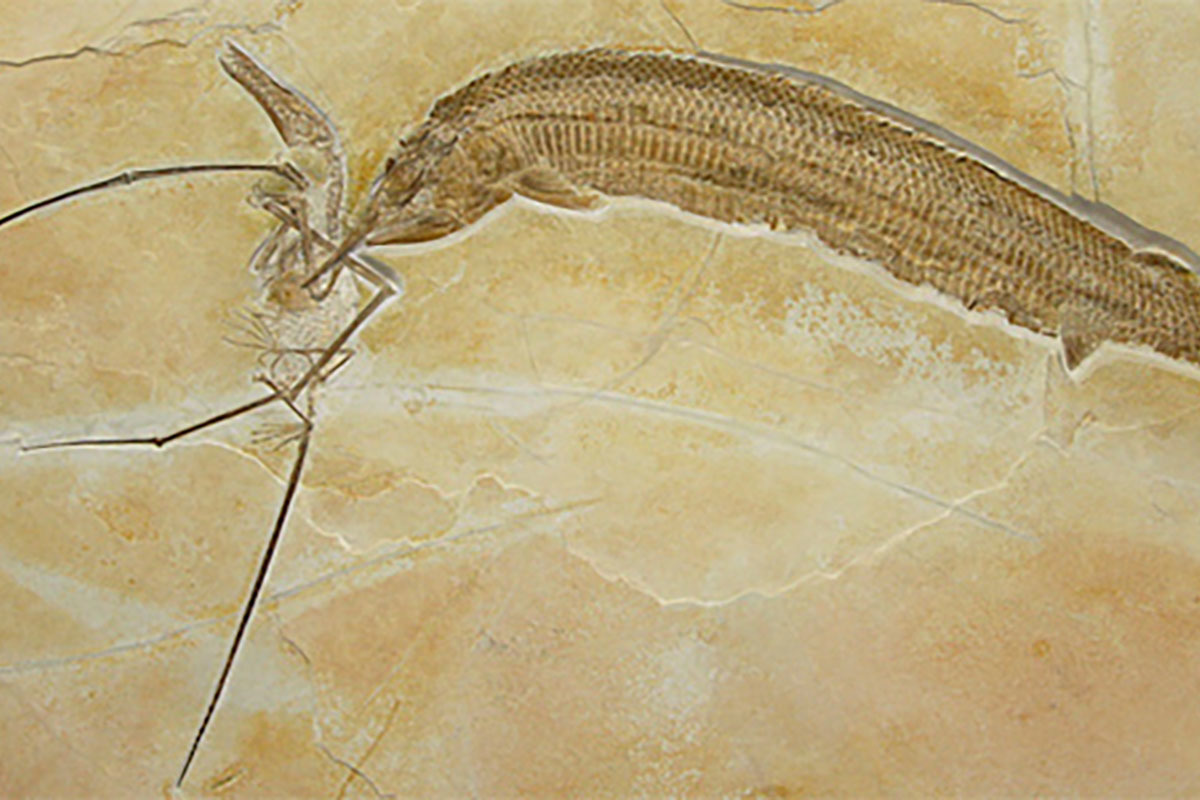 This fossil shows the prey, a Rhamphorynchus, died together with its predator, an Aspidorhynchus
Frey & Tischlinger

The Solnhofen site is famous for the exquisite detail of its fossils. This is because the limestone was originally the muddy floor of a series of peculiar lagoons, with a high amount of salt and almost no oxygen at its bottom. This prevented the proliferation of life at the lowest levels, including scavengers and the bacteria responsible for decomposing carcasses, allowing many organisms that fell to the bottom to be delicately preserved. Aspidorhynchus was about 2 ft (60cm) long and looked like a cross between a swordfish and a gar. With a slender body adapted to quick acceleration, it was a swift predator that may have used its sharp snout to stun or pierce its prey. Meanwhile, the eagle-sized Rhamphohynchus probably lived much like a coastal bird, flying over the waters and preying on small fish swimming near the surface.

Paleontologists aren’t exactly sure how the encounter went down, but a possible scenario is that the pterosaur was flying low and caught the Leptolepides that was found inside its gullet. While it was swallowing its meal, the Aspidorhynchus charged, intending to wound or stun the pterosaur. Instead, the attacker got its face ensnared in the pterosaur’s membranous wing. With the two locked together, the pterosaur couldn’t take off and the fish wasn’t able to properly swim away, making the two sink to the bottom. Thus, while the air-breathing pterosaur drowned, the fish also suffocated by being dragged down to the toxic and oxygen-deprived waters. Undisturbed, the two bodies got buried by sediment and eventually fossilized.

In fact, four other fossils of Aspidorhynchus in association with Rhamphohynchus have been found around the same region. But according to researchers, this particular one indicates that the pterosaur was alive at the time of the attack instead of being scavenged, due to the presence of a yet-undigested meal in its throat. The number of fossils depicting these fights is evidence that it was probably a very common behavior instead of a freak incident: the fishing pterosaurs needed to keep an eye out to avoid becoming food for bigger fish.