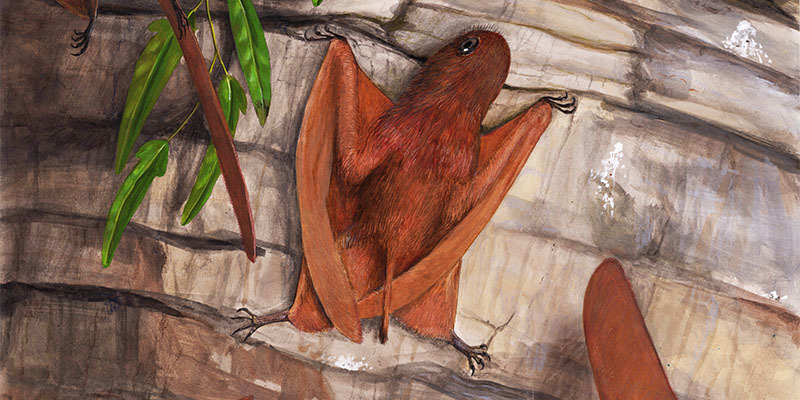 All Posts
Extraordinarily well-preserved fossils discovered from the 1970s to the present day show that all pterosaurs were covered in hair-like fibers known as pycnofibers. Two new pterosaur specimens described by Zixiao Yang and colleagues show that some pycnofibers were actually brush- or tuft-shaped and probably share an evolutionary origin with feathers.

Pterosaurs were flying reptiles that lived in the Mesozoic Era, alongside their close relatives, the dinosaurs. Their wings were formed by a skin membrane stretching from their extra long ring fingers to their ankles. They were the first group of vertebrates to fly, first taking to the air around 230 million years ago, and finally going extinct in the Cretaceous-Paleogene mass extinction 66 million years ago.

The newly described fossils were found in the Middle Jurassic Tiaojishan Formation in northeastern China, dating to about 160 million years ago. They’re both anurognathids, small insect-eating pterosaurs about the size of living swifts and swallows.

They show that there were at least four different types of pycnofibers present. The most simple type is an unbranched hollow filaments that resembles hair. They are found around the head, neck, torso, and limbs of both specimens, and range from about 3-13 mm (1/8 - 1/2 inch) in length. 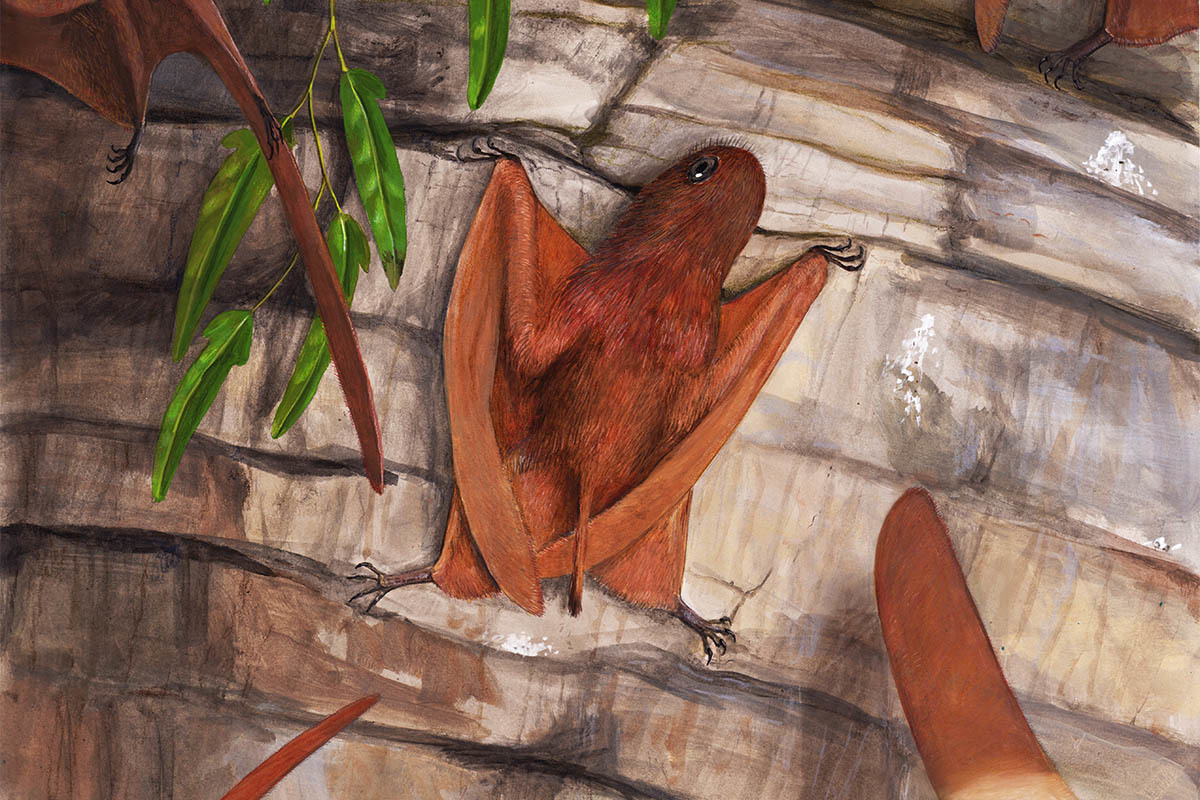 Artist’s reconstruction of the ginger anurognathid whose fossils have been found with four distinct types of feathers.
Joschua Knüppe

The second type had a hollow filament base that branched at its end and resembled a paintbrush or dandelion seed. The brush-like pycnofibers are found on the neck, arms, feet, and tail region, and are around the same size as the unbranched filaments.

The third variety resembles the brush type with a long bristle extending beyond the brushy area. This type is found only around the mouth and may have helped capture insects like the feathers around the mouths of insect hunting birds like nightjars and whip-poor-wills.

The last type is a fluffy tuft found only on the wing membranes. They strongly resemble down feathers in birds.

Feathers were once thought to be unique to birds, but fossils revealed that dozens of non-avian dinosaurs were feathered. They’re not only found in meat-eating theropods close to the ancestry of birds, but also small plant-eating ornithischians more closely related to Triceratops than to birds.

The feathers found in non-avian dinosaurs and even some early birds, show much more variation than what’s seen in living birds. They include hollow hair-like feathers, dandelion seed-like feathers, and tuft-like feathers, as well as other strange shapes. Because dinosaurs and pterosaurs are close relatives, some paleontologists had previously suggested that feathers and pycnofibers might share a single evolutionary origin.

This hasn’t been universally accepted because many dinosaurs are known to be scaly with no sign of feathers. Previous analyses had concluded that the hair-like fibers found in some theropods, ornithischians, and pterosaurs were a result of convergent evolution.

To test whether the similarities are due to convergence or a common origin, Yang and colleagues compared the detailed anatomy of the different kinds of pycnofibers in the new pterosaurs to different feathers seen in dinosaurs.

They found that the hollow unbranched filaments in pterosaurs, ornithischians, and theropods were virtually identical, and bore no obvious physical differences. The brush-like pycnofibers were also quite similar to a type of feather found in theropods closely related to birds. Likewise, the downy tufts on the pterosaurs are identical to downy feathers seen a variety of non-avian theropods.

The researchers concluded that since the pycnofibers on pterosaurs and feathers on dinosaurs were anatomically identical, they must be homologous structures with a single evolutionary origin, meaning that pycnofibers are actually feathers. 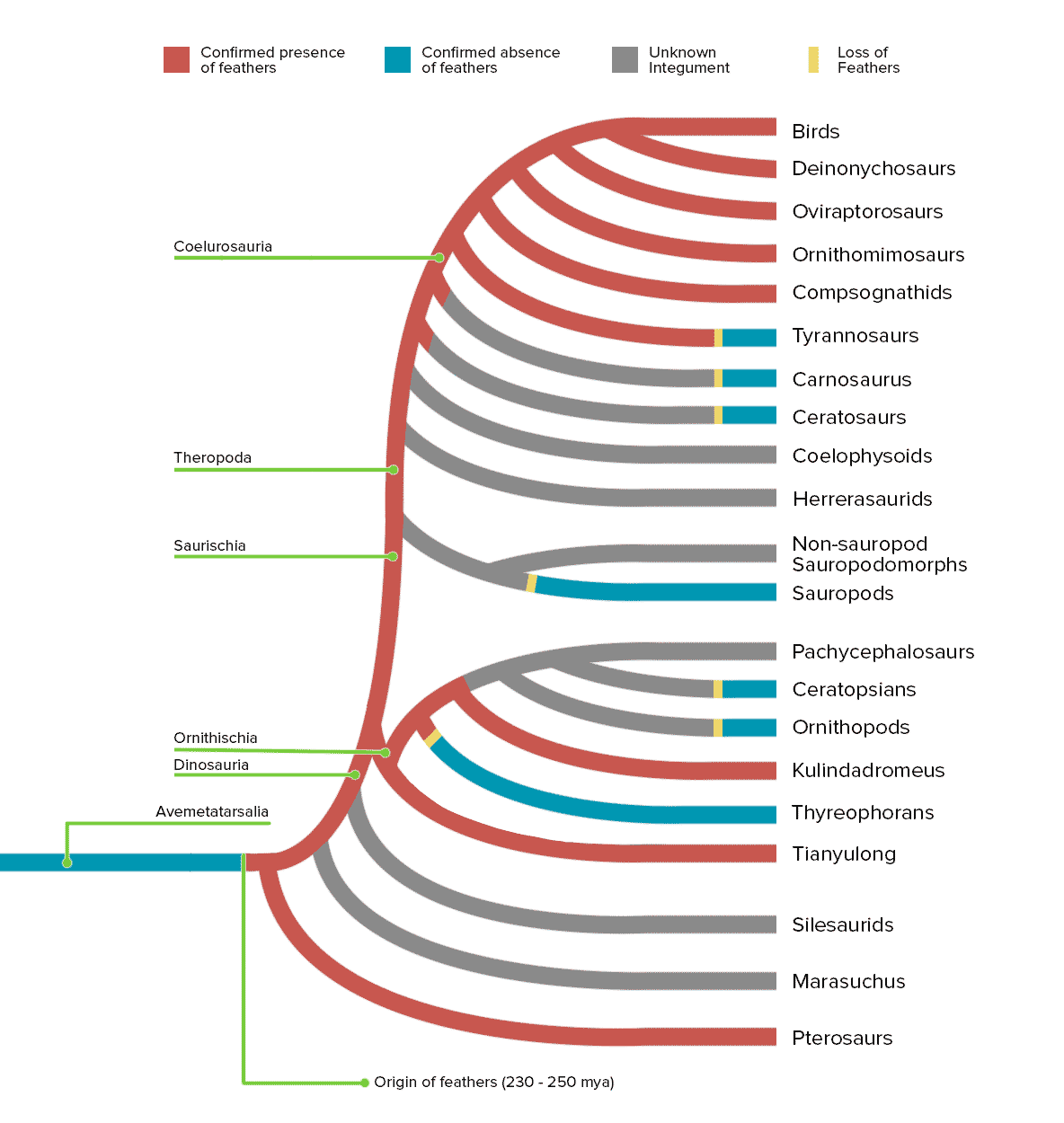 
The first feathers must have been found on the common ancestor of pterosaurs and dinosaurs, living more than 230 million years ago and were probably hollow hair-like filaments. Feathers were subsequently lost in many groups of dinosaurs that had scaly skin, but most dinosaurs have no known skin fossils and may have been scaly or feathered.

The new pterosaurs also gave the researchers details about how the anurognathids looked in life. They found pigment-bearing organelles called melanosomes in the pycnofibers of one of the specimens. The melanosomes were packed with a pigment called pheomelanin, known to produce ginger hair and feathers in living animals.

Hair-like and brush-like pycnofibers were densely packed around the neck and torso and helped streamline the body. The combination of hair- and brush-like fibers could have acted like down in birds creating a layer of warm air close to the skin.

This research will surely lead others to examine pycnofibers in other pterosaurs to see if the brush and downy types are common in other pterosaurs or unique to anurognathids. Likewise, more examples of early dinosaurs with fossilized skin will help unravel the complex history of feathers. If early dinosaurs and their ancestors living in the Late Triassic and Early Jurassic periods are found to be feathered it will help support the early origin of feathers proposed by Yang and colleagues. But if early dinosaurs are found to be largely scaly, it would suggest that the similarities in feathers and pycnofibers are a result of convergent evolution.