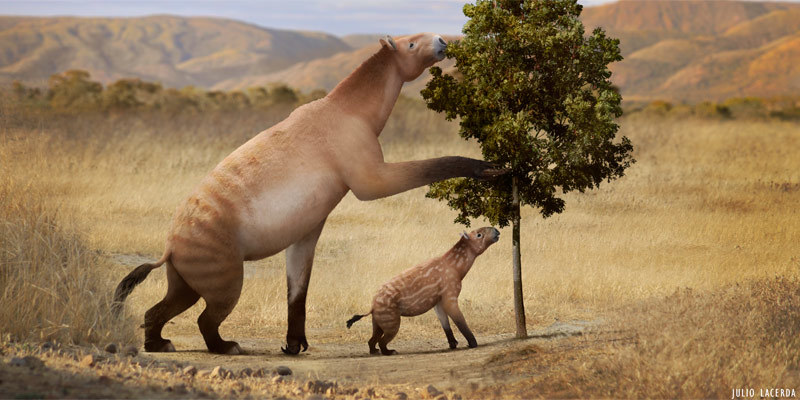 All Posts
Imagine that you are walking through a forest and see a great beast among the trees. It has a horse-like face, a big belly, short hoofed back legs and much longer arms with sharp claws on its “hands”. What you’re seeing is not a mythological creature or a hybrid monster, it’s an extinct chalicothere.

Chalicotheres were a group of odd-toed ungulates, or perissodactyls, related to horses, tapirs and rhinos. But unlike their modern relatives, many species of chalicothere had long, curved claws on their forelimbs and probably knuckle-walked like gorillas and anteaters do today.

They likely evolved from small forest-dwelling animals, similar to the ancestors of horses, around 46 million years ago. They quickly divided into two groups: some became adapted to live in open grasslands, and others continued inhabiting woodlands. The group diversified and expanded from Asia, where they first appeared, to Europe, Africa and eventually North and Central America.

Although their claws were fairly big, all chalicotheres were herbivores. It was once believed that they used their forelimbs to dig tubers and roots, but studies showed that their claws and teeth didn’t present the kind of wear expected if they did so. It is now believed that, much like pandas and the extinct ground sloths, chalicotheres used their long arms and claws to reach for tree branches and strip them of vegetation. Some had bony growths on the back of their finger bones that could have been support for pads, evidence that these animals walked on their knuckles. That would prevent the claws from making contact with the ground, keeping them sharp. 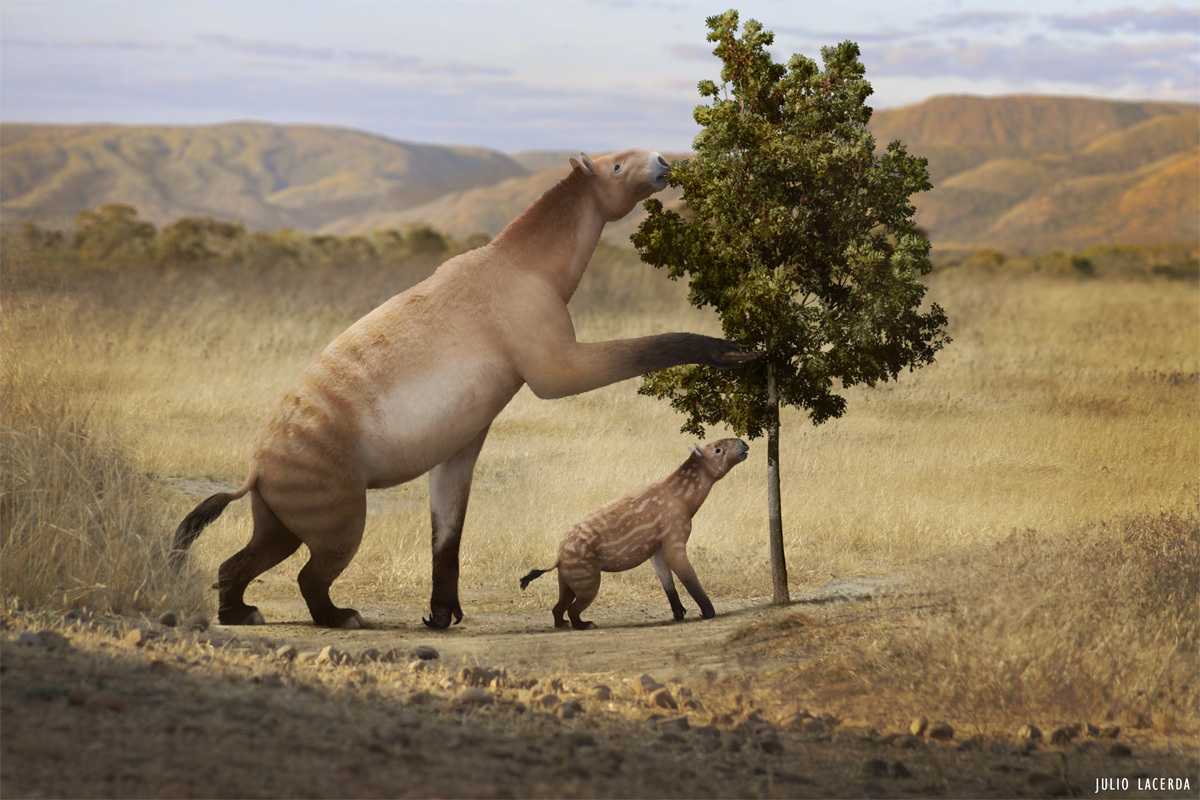 A pair of adult and young Chalicotherium feeding on leaves.

Apart from their claws, another feature that set them apart was that their hindlimbs were considerably shorter and stouter than their forelimbs and probably supported much of the animals’ weight. As a result, chalicotheres had a sloping back like a giraffe, and probably did not move very fast. The weight-bearing adaptations found on their hindlimbs and hips also suggest that they may have spent long periods of time sitting while feeding.

One very interesting chalicothere is Tylocephalonyx, from the Miocene of North America. It had a bony dome on its head, much like pachycephalosaurs, the bone-headed dinosaurs, and may have used it in combat by butting heads with one another. This behavior is also evidence that the species may have lived in social groups.

The largest of all chalicotheres was probably Moropus, also from the Miocene of North America. It stood at about 8 feet tall at the shoulders, making it taller than most horses. Unlike most chalicotheres, it appears that Moropus did not walk on its knuckles despite having big claws, probably because its larger size would put too much strain on its toes. As such, it may have been a more traditional browser, not using its arms like most of its relatives.

The chalicotheres went extinct in the early Pleistocene, with the most recent genus, Nestoritherium from Myanmar and China, disappearing from the fossil record around 8 thousand years ago. It is not known why they died out, but possible causes are climate change and competition from other herbivore groups. Whatever the reason, it’s a shame we don’t have them around today. Seeing a horse-ape sitting down munching on leaves would be a very interesting sight.


Related Stories
The prehistoric beast with the ‘hairstyle’ of a Star Wars queen
Terminator pigs: Rise of the entelodonts
The last camels of North America
Giant hyena versus tusked rhino
Legend of the "Devil's Corkscrews"
//sulc.us/umrqz
/articles/extinct-hoofed-animals-looked-like-gorilla-horse-hybrids/