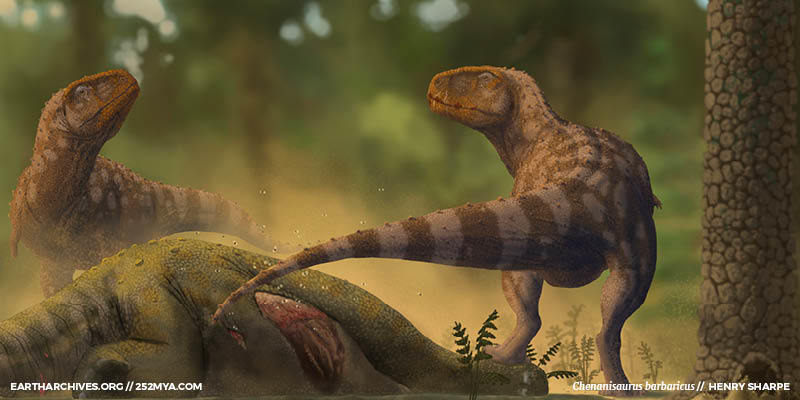 over 3 years ago by Henry Sharpe

All Posts
Abelisaurids were a family of strange, short-faced carnivores that, after millions of years living in the shadows of larger predatory dinosaurs, suddenly spread across Gondwana, the southern hemisphere, in the late Cretaceous Period to become the dominant predators across four continents. A fossil discovered in north Africa gives additional insights into how these animals managed to disperse across so great a distance.

Before the prehistoric fauna of the southern hemisphere became relatively well-studied, pieces of small, fragmentary fossils started turning up in South America that looked suspiciously like the large carnivores of the northern hemisphere. While palaeontologists there were quick to label these finds as southern tyrannosaurs, a series of finds in 1985 by Argentine palaeontologist José Bonaparte brought to light what these finds really represented. They were massive theropods defined by stunted, wrinkled skulls and miniscule arms.

To date, more than 20 types of these strange carnivores, known as abelisaurids, have been found. They range from the strange scavenger Rugops, a mid-sized animal with a wrinkly, roughly-textured sheath covering its face, to the larger Majungasaurus, a stumpy-legged predator with an odd, blunted, unicorn-like spike. The Late Cretaceous Carnotaurus was particularly strange; it boasted a pair of bull-like horns over its eye sockets as well as rows of bony scales lining its body, and was able to run at a terrifying top speed of 56 kilometers per hour (35 miles per hour). All of these animals are united in this family by forwardly-compressed skulls with strange decorations, and miniscule arms that T. rex could have made bad jokes about.

Today, these abelisaurids are found in 4 continents, and seem to have replaced the larger allosauroids and more specialized spinosaurids as the dominant carnivores of Gondwana. Interestingly enough, it seems that this trans-continental distribution happened rather suddenly, and one particular creature may explain just why they were able to spread so far. 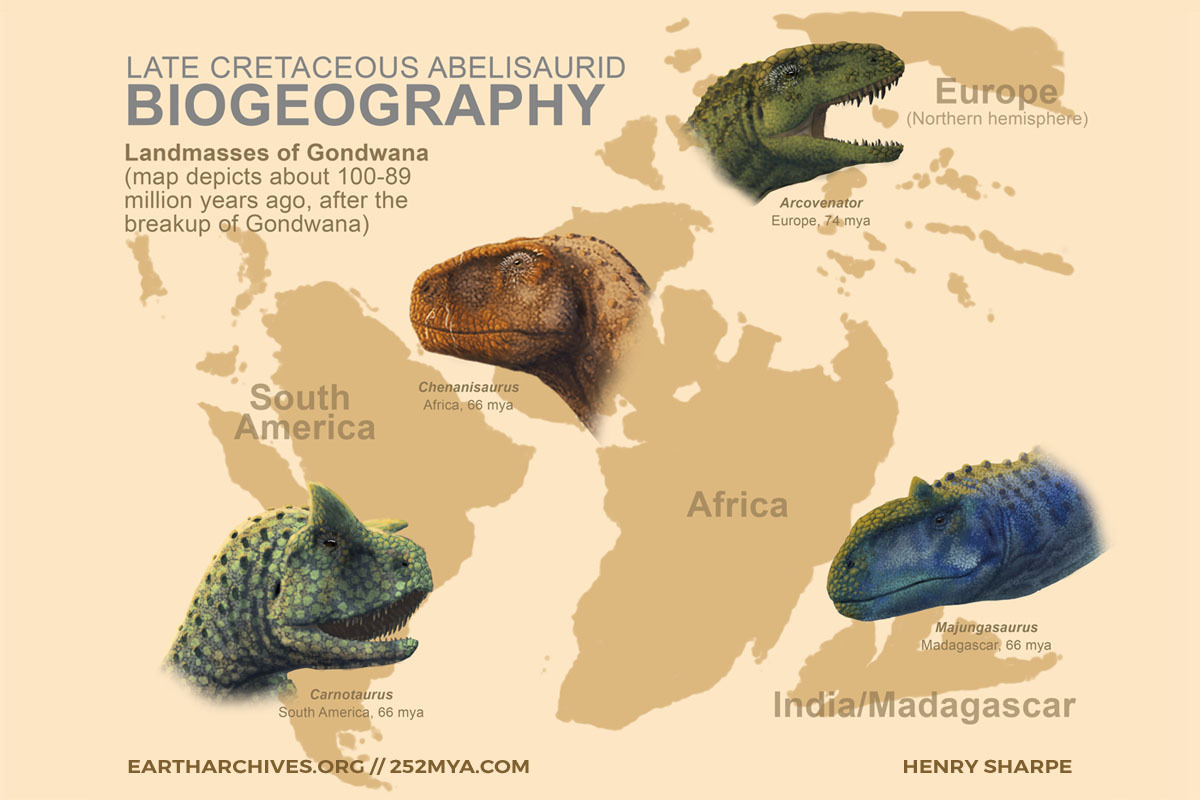 The distribution of abelisaurids
Henry Sharpe 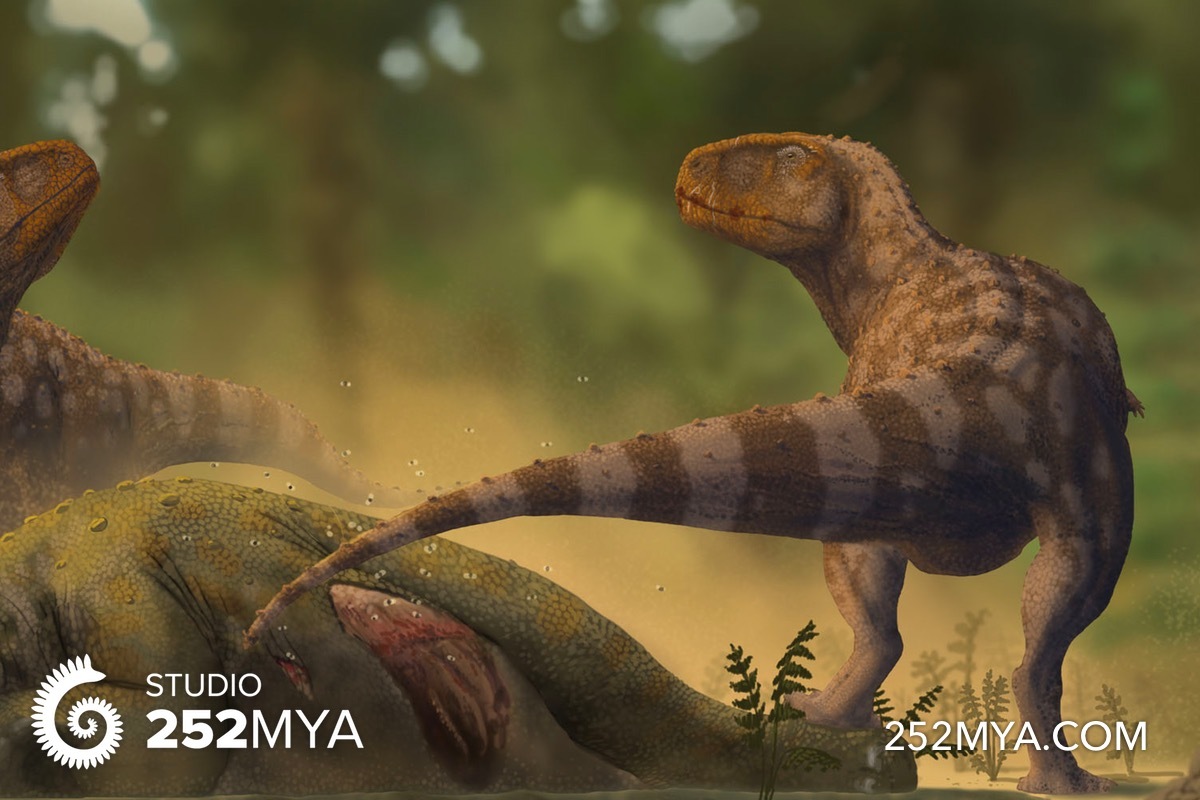 Chenanisaurus barbaricus
Like its cousins found in South America and South Asia, Chenanisaurus had a short face and tiny arms. As the first abelisaur found in Africa, it gave researchers an insight into how the group spread all around the ancient continent of Gondwana.
Henry Sharpe 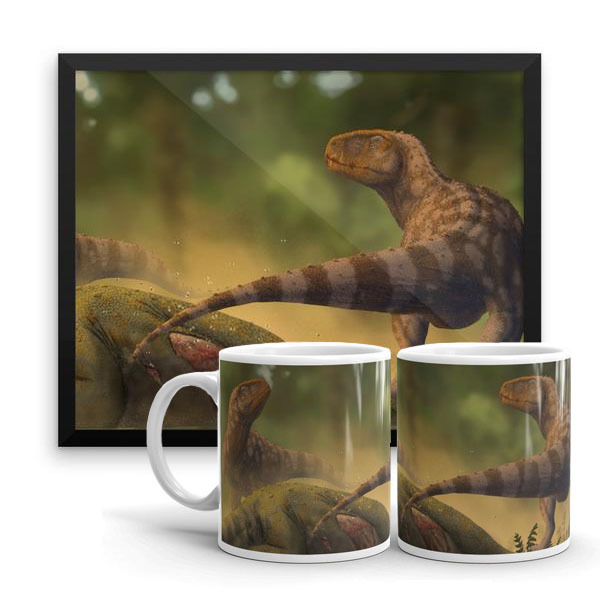 Get Henry's artwork as prints and merchandise from 252MYA.com today!
Credit: Henry Sharpe

This dinosaur, known from just a single jaw, has been given the name Chenanisaurus, or “Sidi Chennane lizard”, after the mines in which it was discovered. It is a particularly important discovery because, while other locations in the southern hemisphere boast many abelisaurid species, Chenanisaurus is the only named abelisaurid from the end Cretaceous of Africa.

With help from this species, it is now possible to piece together a picture of the spread of abelisaurids all around Gondwana. In the middle Cretaceous, when the supercontinent that made up the southern hemisphere broke up into the continents and islands we see today, groups of abelisaurids found themselves isolated on these land masses. These new populations began to evolve based on the specific needs of their respective separated land mass as they moved around the globe. Three distinct abelisaurid populations sprang up, located in South America, India/Madagascar and now represented by Chenanisaurus in Africa. This model has been proposed before, but the new dinosaur helps cement this idea as the leading cause for this sudden trans-continental distribution of abelisaurids.

What’s more, it seems that there was another small population of abelisaurids located in the small islands that made up Europe in the Cretaceous. Here though lies a problem. Europe and Gondwana were, at the time this population was estimated to have left, separated by ocean. How then did this small population manage to migrate to Europe? For now, speculation abounds, but hopefully more fossils will be discovered in Africa and Europe that will explain this conundrum.