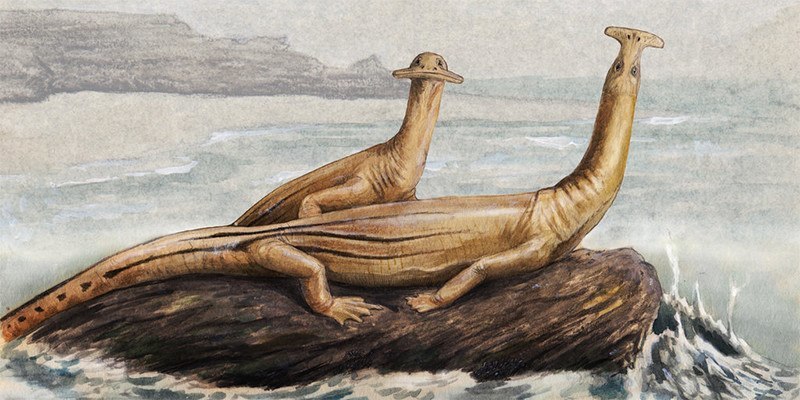 All Posts
Atopodentatus caused a stir online when it was described scientifically two years ago. It was reconstructed with a split in its upper jaw, using this weird apparatus to sift through the sand like a walrus. Yet new discoveries have shown that it was more like a spoon-billed marine iguana in its feeding habits.

New evidence suggests that the Lovecraftian Triassic marine reptile Atopodentatus was far from a zipper-faced sand-sifter like previously believed. Instead, it was more like a spoon-faced marine iguana. A stunning new find shows just how it happened, with researchers from China and Scotland publishing their find in the journal Science Advances.

This new fossil shows the portrait of a beast which had a rather hammer-headed jaw structure, with tiny teeth inside the mouth. Instead of dragging its jaws through the sand as previously thought, Atopodentatus was hoovering up algae and other marine plants with that vacuum cleaner-shaped face. The three-meter reptile was living a lifestyle somewhat similar to a marine iguana, the only herbivorous lizard in the world.

And just like the current iguana, Atopodentatus was unique among its kind. It was the only herbivorous marine reptile in a whole sea of fast predators and it very well may have been the first. It lived 247 to 244 million years ago, during the middle of the Triassic period. 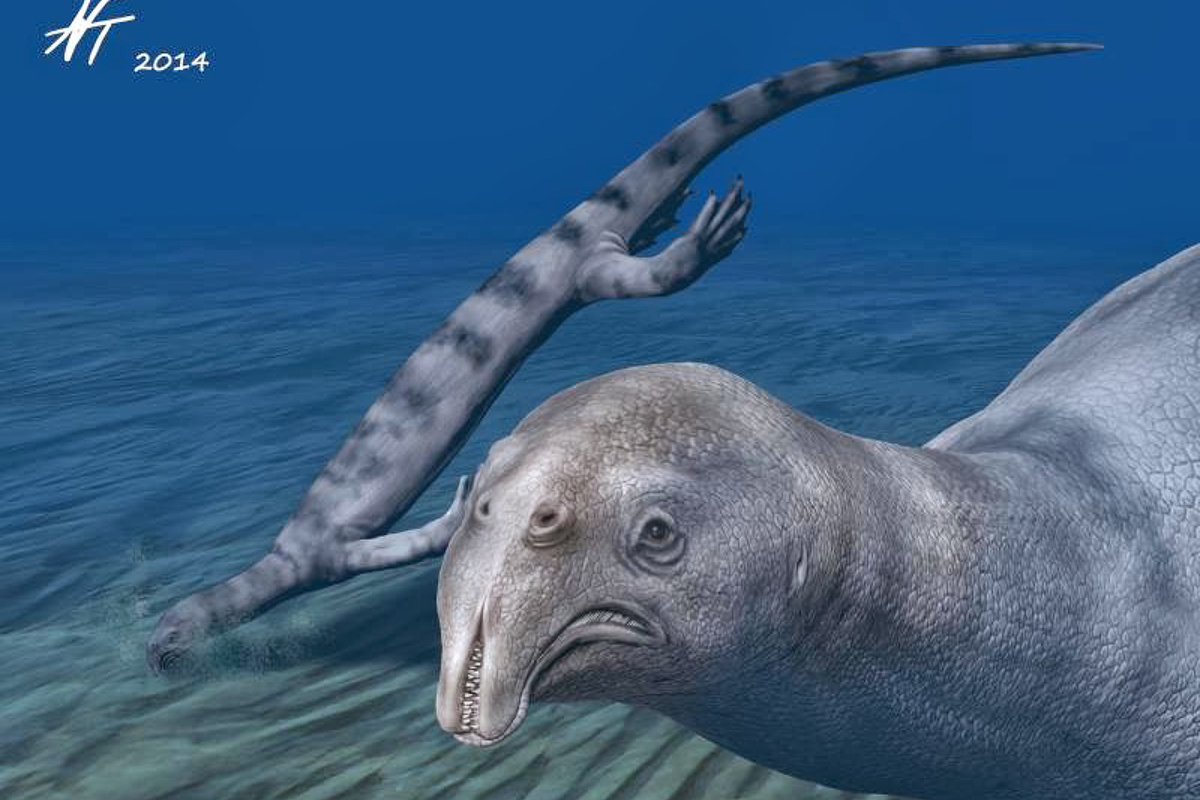 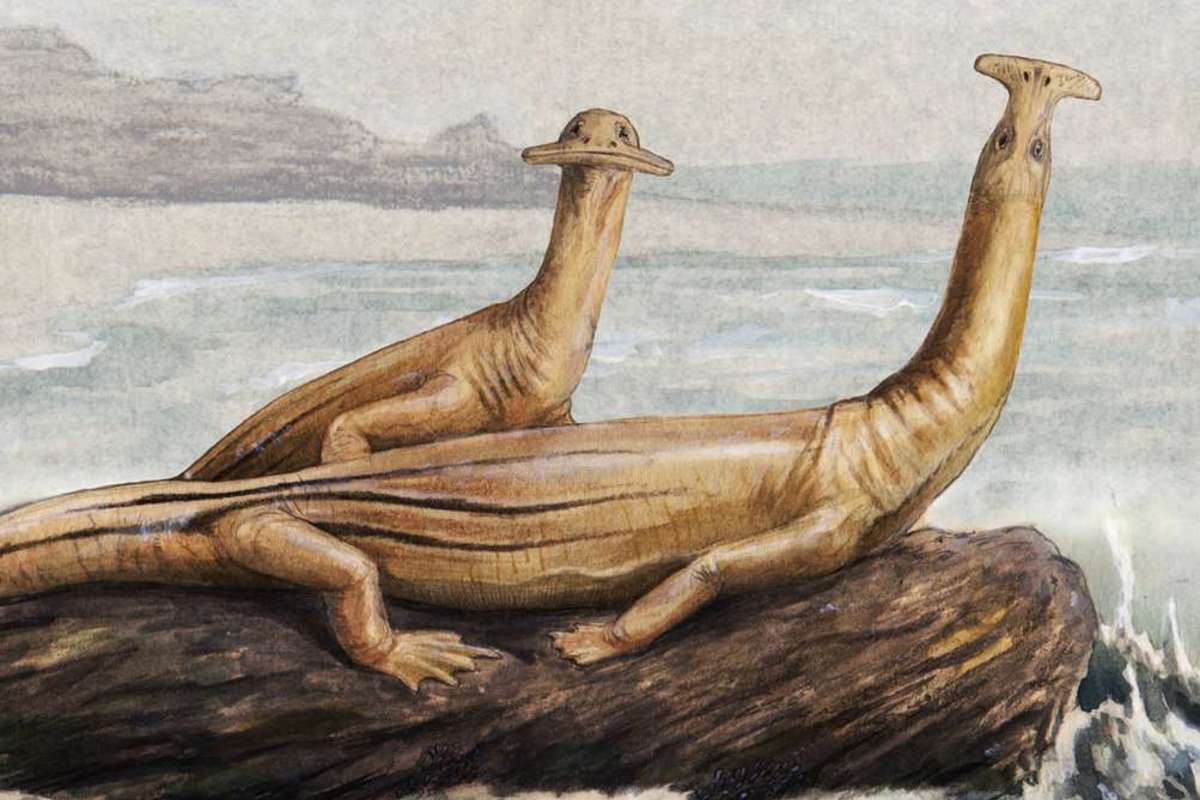 Pair of Atopodentatus
Two Atopodentatus take a break from feeding, basking on the rocks close to the shore.
Joschua Knüppe

The world had just been through an incredible disaster in the form of the Permian Extinction. Ninety-five percent of all life on the planet had been wiped out in the cataclysm, including marine ecosystems. Yet the sheer weirdness of Atopodentatus shows us just how quickly life was rebounding after the event, according to Nick Fraser of National Museums Scotland and co-author of the paper.

Fossils of Atopodentatus unicus were first discovered in China’s Luoping Province in Yunnan, and scientifically described in 2014 by Wuhan Institute of Geology and Mineral Resources paleontologist Long Chen and colleagues. When it was revealed to the world, it took both the lay and the scientific communities by storm. It had the standard body of a Middle Triassic marine reptile – a long, sinuous tail, strong body and short legs for swimming – but the most perplexing detail was in its head.

The previous skull, while very well preserved, was crushed and presented something of an enigma. It had a downward-curving jaw, split down the middle and containing a set of incredibly small teeth. This weird portrait soon became popular everywhere as paleoart circles rushed to illustrate the weird beast. Some stretched the split upper jaw to incredible extremes while others closed the split, creating a much more conventional-looking animal.

Based on that distorted skull of a previous specimen, paleontologists got off on the wrong track while figuring out Atopodentatus’ lifestyle. It lived alongside fast-swimming fish-eaters during the Triassic. These included slim dragon-like nothosaurs and dolphin-shaped ichthyosaurs, all early representatives of successful marine reptile groups.

Yet according to the researchers, Atopodentatus might have been a filter-feeder and not a hunter of large struggling prey. It was not even strong enough to bite down hard on bigger animals, as shown by studies of its jaw muscles. Instead, it may have been a filter-feeder though not like most modern whales. Instead Atopodentatus might have sifted food off sandy sea bottoms, searching out tiny invertebrates. Thus it was more like a grey whale than a more active humpback or blue whale, according to Chen. That is, until now.

Original study can be found in Science Advances