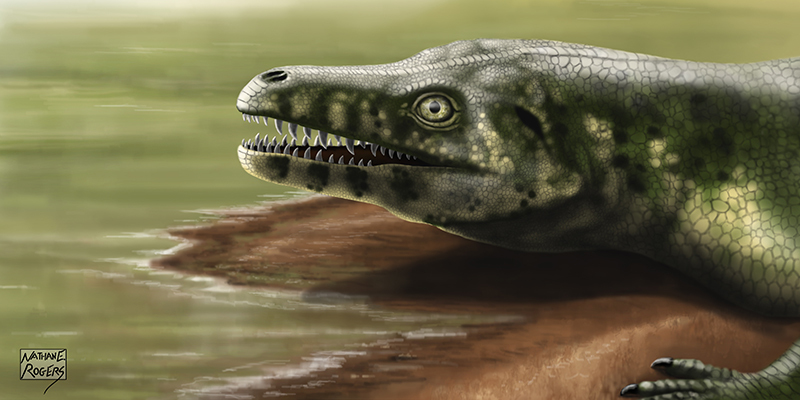 All Posts
A toothy beast the size of a large lizard roamed Brazil over 250 million years ago. Armed with large teeth and powerful jaws, this predator’s wonderfully preserved skull may hold clues to the origins of some of the biggest creatures that ever existed on Earth.

The mighty dinosaurs had their origins in some of the smallest and most conventional-looking of basal Triassic archosauriformes. This was a large group consisting of some rather lizard-like or crocodile-like carnivorous animals. All these creatures rose to dominance after the cataclysmic Permian Extinction, the greatest mass extinction ever. This massive event wiped out roughly 90 per cent of all life, leaving only the smallest and most generalized animals behind. For a long time, there were no massive animals around but what they lacked in size, they made up for in sheer hardiness. Among these pioneering survivors were the early archosauriformes. The first of them appeared on the scene during the closing days of the Permian and continued into the Early Triassic as ancient holdovers of a lost era.

One of them named Teyujagua paradoxa comes from the very beginning of the Triassic. The only known remains of of the animal were uncovered early last year and described by a team from the Paleobiology Laboratory of the Universidade Federal do Pampa in Brazil, in a location known as Rio Grande do Sul. This area has been a wonderful fossil site for both Permian and Triassic organisms, showing unique transitions between different faunas and how some died out while others pulled through. The other animals associated with Teyujagua include ancient amphibians and dicynodonts, early relatives of mammals. It was described by a team consisting of Dr. Felipe Pinheiro and other researchers from the university, while Dr. Richard Butler of the University of Birmingham co-authored the research papers.

The creature’s rather tongue-twisting genus name comes from that of a folkloric dog-headed lizard, an evil creature in native mythology. The animal is known mainly from a wonderfully complete skull, a precious find in rocks this old. The skull is around 11.5 centimeters long, and corresponds to an animal the size of many big lizards. Analysis of these remains shows limited binocular vision, important for a hunter. Like many of its kind, it seems to have had a rather tapered head. The end of the snout is somewhat curved, but not so dramatically that it has a prominent overbite. Its teeth were serrated and a formidable array lined the animal’s heavy, almost crocodile-like jaws. Based on its other relatives farther afield, Teyujagua would have been a squat and short-legged predator, much like a crocodile in some of its habits. It might have been a semi-terrestrial hunter unlike some of its fish-eating ancestors. Teyujagua may have also been a powerful ambush predator, exploiting the niches left by the gorgonopsians, carnivorous mammalian relatives that died out at the end of the Permian. The world was Teyujagua’s playground and for some time during the Early Triassic, the basal archosauriformes were the top dogs. They would leave behind a beautiful variety of both dinosaurs and crocodiles as their legacy for many millions of years to come. 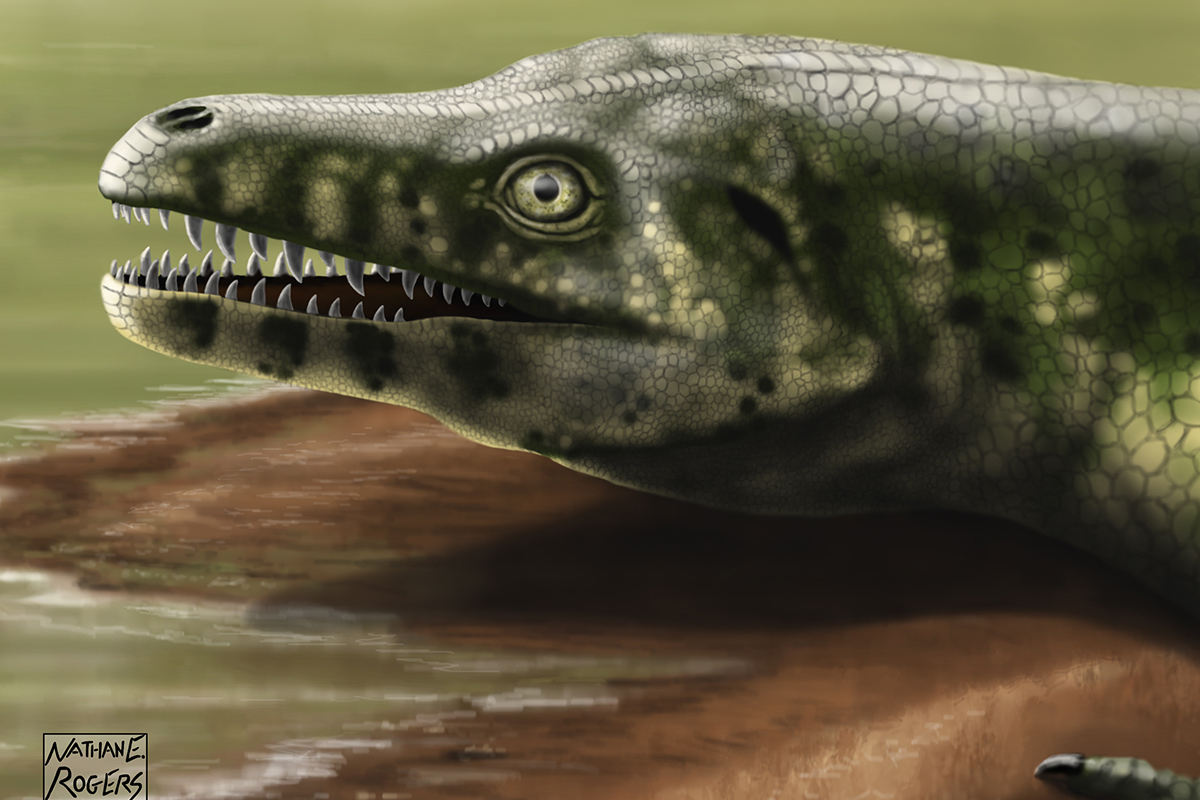 Portrait of a predator
A basking Teyujagua rests beside a lake.
Nathan Rogers 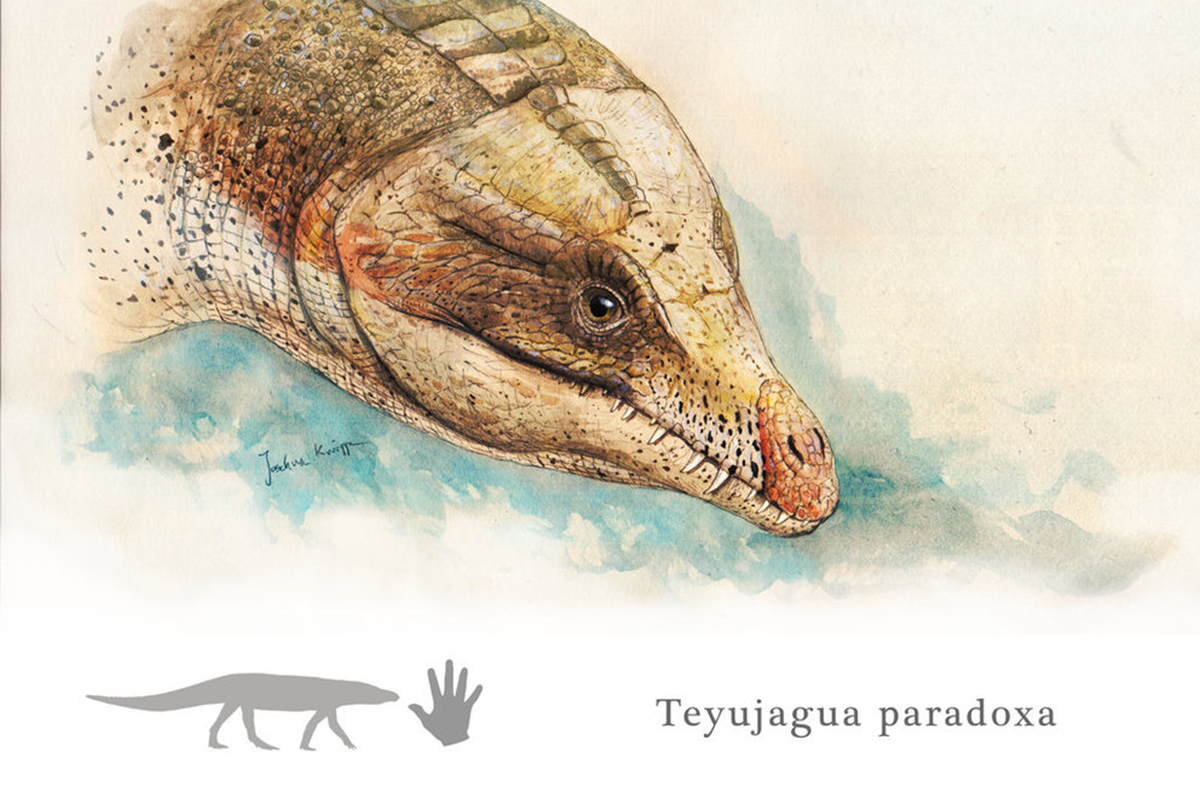 Teyujagua vital statistics
Teyujagua was not a large animal, but it was certainly heavily built.
Joschua Knuppe


Related Stories
The evolution of ichthyosaurs, the mighty "fish-lizards" of the Mesozoic
Hammerhead marine reptiles vacuumed up algae
Saber-toothed cats once hunted in South America
Clash of the Triassic titans
The odd little reptiles of the Triassic forests: Longisquama
//sulc.us/l1j90
/articles/beautiful-fossils-reveal-ancient-ancestor-of-crocs-and-dinosaurs/