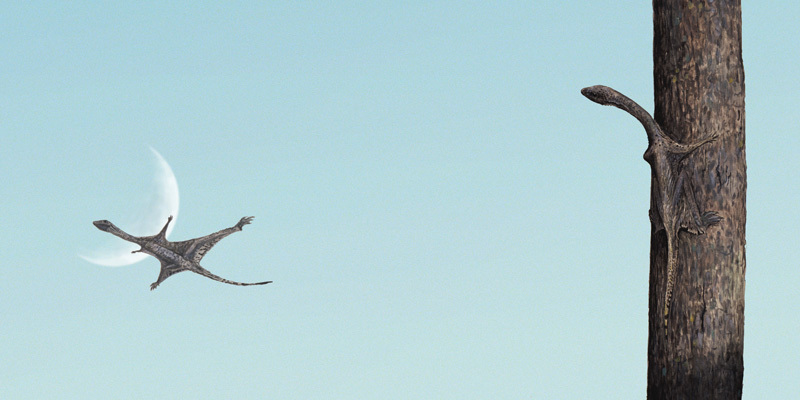 All Posts
Powered flight evolved three times in vertebrates, all converting their forelimbs into wings. The body plan modifications among gliders however are far more diverse, including a new Triassic reptile with long legs bearing a wing membrane.

The Triassic Period was a time of evolutionary experimentation among reptiles. A newly discovered Triassic reptile from Poland described by Jerzy Dzik and Tomasz Sulej shows bizarre body proportions that suggest it was glider that bore a wing-membrane on its long legs.

The reptile, named Ozimek volans, was discovered in rocks at a former clay pit at Krasiejów, Poland. The rocks were deposited as mud at the bottom of a lake about 230 million years ago. Ozimek is known from several specimens in various stages of decomposition, including several curled up specimens that may represent bones that were defecated or regurgitated by predators. No specimen represents a complete skeleton, but in total they preserve portions of the skull, most of the neck and trunk vertebrae, the base of the tail, ribs, the shoulders and forelimbs, and the hips and hindlimbs. Total length from the snout to tail base is about 40 cm (16 inches). Most of the tail is unknown, but may have made up more than half the total body length. Ozimek is named for a nearby town, and the species name, volans, is Latin for flying.

Ozimek's skull is known from portions of the upper jaw, the region around the eye, temples, and the jaw joint, as well as significant parts of the lower jaw. Although incomplete, the skull shows that Ozimek has closely-packed, sharp, conical teeth, indicating a carnivorous or omnivorous diet. The temporal region shows that Ozimek had two temporal openings on both sides of its skull, indicating that it was a diapsid, a member of a large and diverse group of animals that includes every living reptile and bird. Ozimek has a remarkably long neck, made up of just seven long vertebrae. The length of the neck is approximately the same length as the trunk. 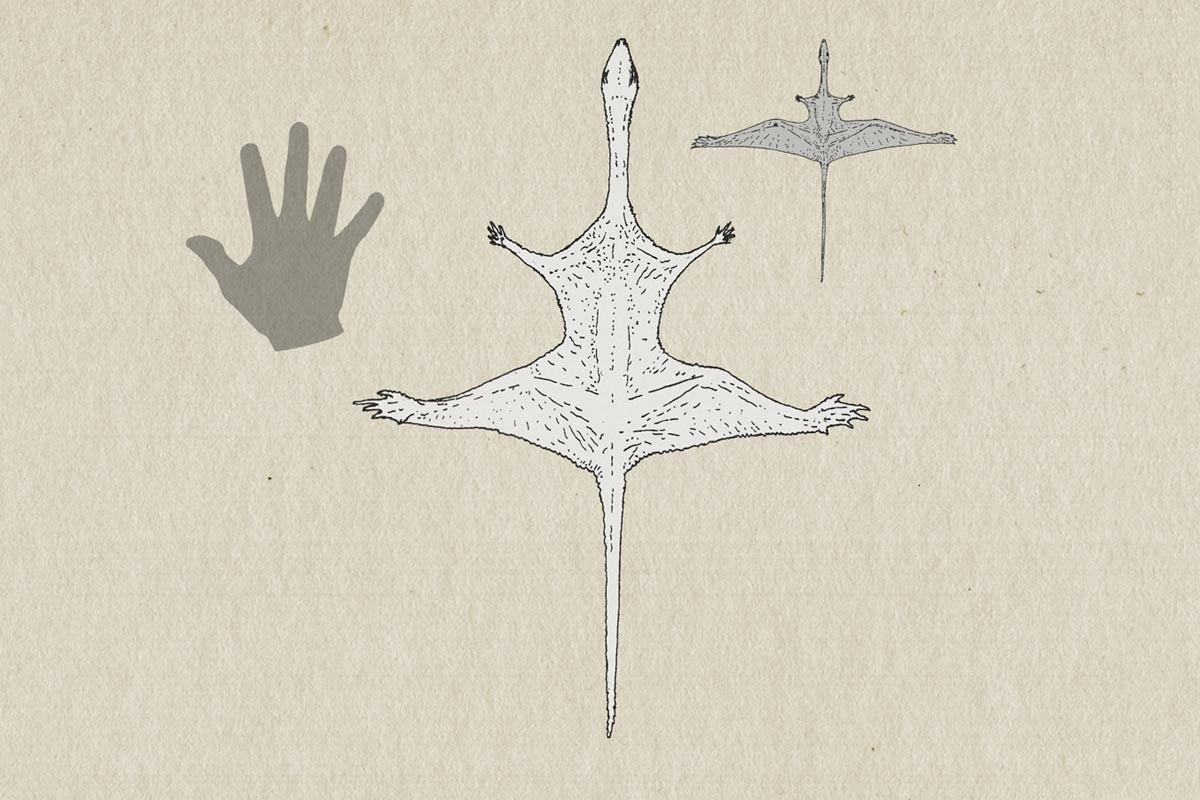 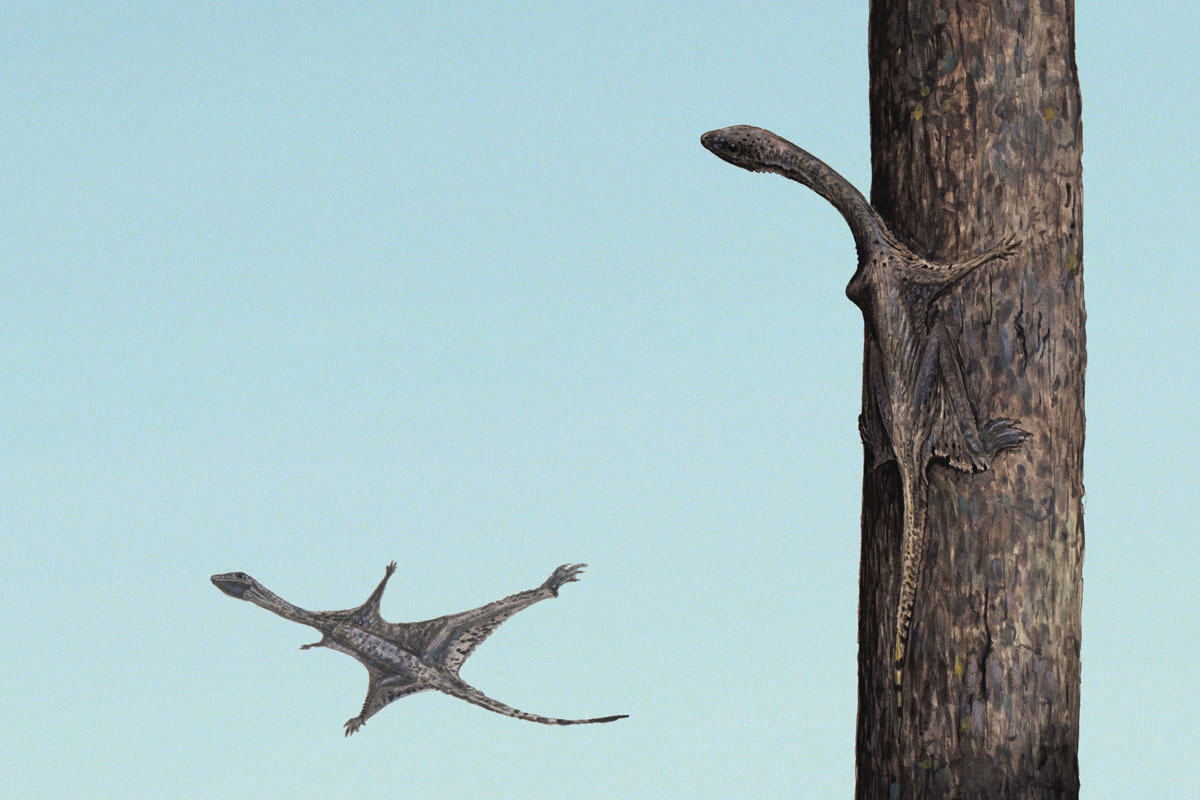 A pair of Ozimek volans, one perched and one gliding.
Joschua Knüppe

Ozimek's unusual anatomy isn't limited to its neck – its limbs are what really sets it apart. Both arms and legs are made up of incredibly long and narrow bones, resembling twigs more than bones. Each arm and hand was roughly 15 cm (6 inches) long, and each leg and foot roughly 23 cm (9 inches) long. The limb bones are also hollow.

The odd proportions of the body reminded Dzik and Sulej of another enigmatic reptile, Sharivopteryx mirabilis, from the Triassic of Kyrgyzstan. Sharovipteryx is known from a single articulated specimen that like Ozimek, has a long neck, and extremely long legs, but is only about one-fourth its size. Amazingly, Sharovipteryx is thought to have been a delta-wing glider because it's preserved with the impression of a wing membrane extending from the feet to the base of the tail.

Sharovipterigids are considered to part of the protorosaur radiation, a group of enigmatic Late Permian and Triassic reptiles closely related to the archosaurs – the group that includes living birds and crocodilians. Besides sharovipterigids, protorosaurs include the namesake Protorosaurus, the tree-dwelling drepanosaurids, and the long-necked semi-aquatic tanystropheids. In fact, Dzik and Sulej noted several similarities between Ozimek and tanystropheids although they didn't conduct a phylogenetic analysis to test different hypotheses.

Although no wing membranes are preserved with any specimen of Ozimek, it seems likely to have had them based on similarities to Sharovipteryx including the odd limb proportions. Previous analyses of Sharovipteryx determined that it would be an efficient glider if it used its short forelimbs as canards. Without the use of the forelimbs as an aerodynamic surface, it's unlikely Sharovipteryx or Ozimek could maintain stability while gliding.