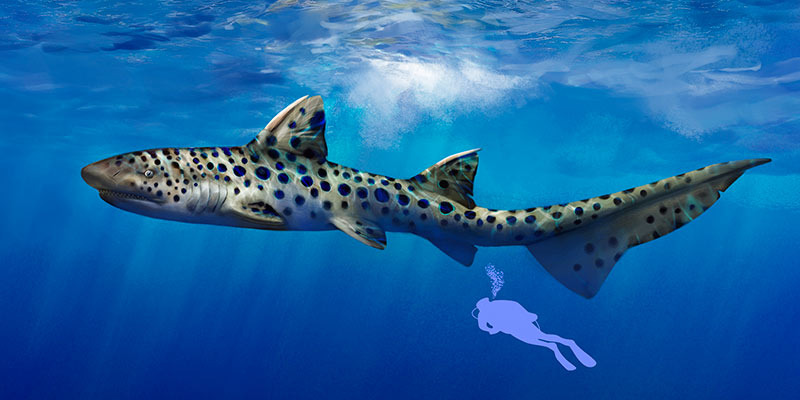 All Posts
The huge fish, dubbed “Texas supershark”, measured more than 26 feet (8 meters) long and lived well before the age of dinosaurs.

Enormous sharks once made Texas their home. Differently from the mostly arid region that it is today, for a long time during Earth’s history the US state was submerged under a narrow sea called the Western Interior Seaway, that divided North America into two separate landmasses. But this mega shark was not like Megalodon, the famous bus-sized whale-eater.

While Megalodon was a fairly modern shark, disappearing only 2.6 million years ago, the so-called Texas supershark was much older. It lived around 300 million years ago, during the Carboniferous period - a time when our amphibious ancestors were beginning to venture out on land, and dinosaurs hadn’t yet made their debut.

The supershark still hasn’t received a proper scientific name. Other, similar sharks from around the same age are known from both the US, like Glikmanius occidentalis, and from elsewhere in the world such as Goodrichthys eskdalensis from Scotland. Further studies will need to be carried out to determine whether the Texas find belongs to an already-known species or if it’s something entirely new.

But even though similar fish have already been found, the Texas supershark is remarkable for its size. Both of its purported relatives measured between 6.5 feet and 8.2 feet (2 m and 2.5 m) in length. Even though the supershark fossil doesn’t represent a complete specimen, researchers could extrapolate the measurements of its skull and compare them to those of other species of ancient sharks known as ctenacanthiforms - a group which scientists think the supershark may also belong to.

They found that most ctenacanthiforms had skulls that comprised around ten percent of their total body lengths. If the Texas supershark has the same proportions, its 31.5 inch (80 cm) long skull suggests a total length of 26 feet (8 meters) long - about half the size of a school bus, and 25 percent longer than a modern Great White.

This came as a surprise, since sharks of this size range were previously known to have appeared only around 130 million years ago, well into the dinosaur age. The Texas supershark suggests these predatory fishes were already growing big much earlier than that.

There’s a lot more that paleontologists are trying to discover about the supershark, and new findings will surely help paint a clearer picture of this ancient creature. But this extraordinary Texan has already given us a new understanding of the early history of giant sharks.

Materials provided by the Society of Vertebrate Paleontology.