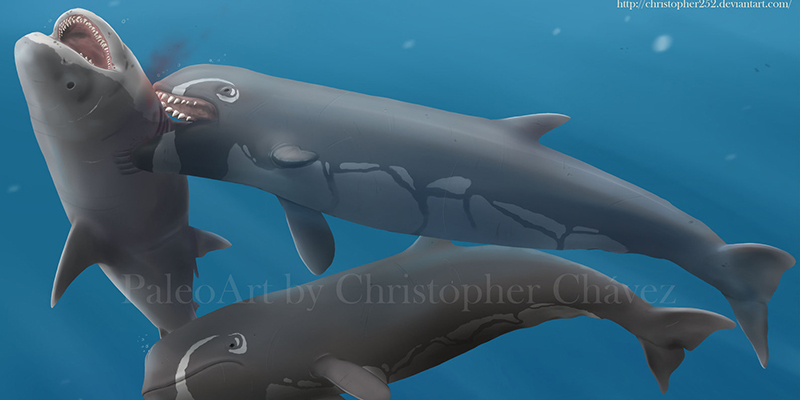 The mighty Megalodon shark may have starved to death

almost 5 years ago by Julio Lacerda

All Posts
For years, paleontologists speculated why the famous 18 meter (59 foot) long shark disappeared from the oceans around 2.6 million years ago. New evidence suggests competition and lack of food may have been the causes.

Most people have probably heard of Megalodon (Carcharocles megalodon), the giant prehistoric shark whose name means “big tooth.” Famous for reaching lengths of up to 18 meters (59 feet) - about twice as long as a bus – and preying on whales, Megalodon has been featured in numerous works of fiction such as movies, novels and “documentaries.”

It’s a classic “sea monster”, packing humanity’s instinctive fear of sharks in an enormous size, and some people even believe it may still exist in the uncharted depths of the ocean. But that is very unlikely, because as far as paleontologists know, the big fish died out around 2.6 million years ago. However, even though no fossils of Megalodon younger than this date have been found, the reasons why it disappeared were not very clear.

The most common fossils belonging to Megalodon – and for that matter, most kinds of shark – are its teeth. That’s because sharks belong to a group of fishes called Chondrichthyes, or “cartilaginous fishes,” together with rays, sawfish and chimeras. Their bodies are mostly supported by cartilage instead of bones, which makes them very lightweight and flexible.

This also means that their remains decompose much more quickly, because cartilage is less resistant to decay. Their teeth on the other hand are made of dentin, a substance that’s even harder than bone, and so they often remain long after the rest of the animal has rotted away.

Teeth from Megalodon have been found in coastal regions all around the world, from the Caribbean to Japan, and even regions far away from land like the Mariana Trench in the middle of the Pacific Ocean. The earliest remains have been dated to around 23 million years ago, which means the species existed for more than 20 million years in total. But if it had such a long-lived and wide-ranging distribution, what made it go extinct?

For many years, climate change has been considered the main reason why Megalodon disappeared. The Earth has been in a cooling trend beginning 15 million years ago, with global temperatures declining until it culminated in the last ice age that started 2.5 million years ago, roughly around the same time the shark is believed to have gone extinct. This led scientists to theorize it could not cope well with the decreased temperatures of the oceans, restricting its population to the tropics until its ultimate demise.

But a new study led by Catalina Pimiento from the Paleontological Institute and Museum of the University of Zurich analyzed 200 records of Megalodon findings and, by researching the fossils and the ecosystems in which the sharks lived, came to an important conclusion: climate conditions weren’t the main drive behind the end of Megalodon’s reign.

The team found that, within the general trend of cooling, there were fluctuations of higher and lower average temperatures during the past 20 million years, and these fluctuations should have affected Megalodon’s numbers and distribution accordingly if the traditional theory was correct. But they didn’t.

Instead, the researchers found that Megalodon seems to have thrived consistently until a peak abundance during the Middle to Late Miocene Period, around 10-5 million years ago, after which it started to decline until extinction. The species’ collapse seems to be tied to an important point in time, rather than showing several ups and downs.

What may have happened in this crucial period, the Late Miocene, is the disappearance of many species of small to medium-sized baleen whales and the appearance of some powerful competition: orcas.

Megalodon seems to have been heavily dependent on relatively slow-moving whales for food. Those experienced great diversity during the Miocene, with many more species known from fossils of that time compared to the number of species alive today.

But then, changes in sea level and nutrient distribution in the oceans happened around 2-3 million years ago with the onset of the last Ice Age, causing the extinction of many marine mammals. The ones that survived were either too agile for Megalodon, like dolphins and porpoises, or spent most of the year in polar regions where the shark couldn’t follow. This may even have caused an increase in cannibalism, with adult sharks preying on juveniles due to the lack of other options.

The appearance of the killer whale’s ancestors may have been the final blow to Megalodon. Just like their modern descendants, the prehistoric orcas were well-adapted to living in many different oceanic conditions, from the tropics to the poles, due to their mammalian metabolism and insulating fat. Being smaller, they could also survive on smaller prey than Megalodon while competing with it by attacking larger whales in pods.

Megalodon’s decline began causing significant changes in the ecosystems of the world: average size for baleen whales increased greatly, since they no longer had a major predator to keep them in check, leading to incredible giants like the blue whale. And other apex predators, like Megalodon’s smaller cousin, the Great White shark, could occupy the spaces left vacant.

It seems that this combination of factors, only indirectly related to the Earth’s cooling, was too much for the massive sharks. Being restricted to tropical waters with not enough food to sustain their large bodies year-round, they vanished from everywhere except our collective imagination – where they’re probably going to survive for a lot longer.