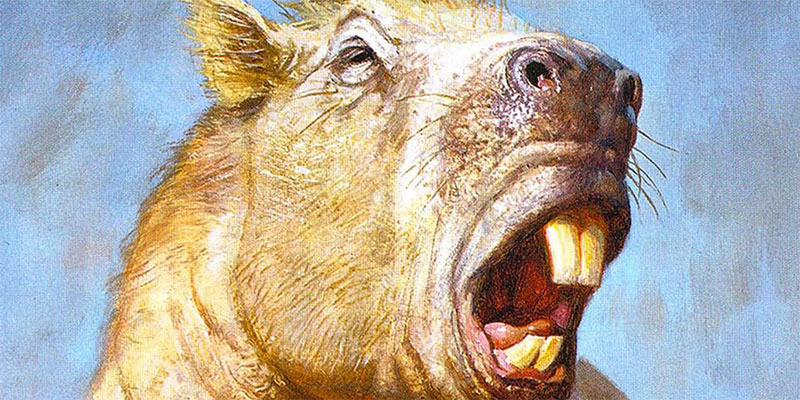 The biggest rodents in the world used their teeth as tusks

All Posts
When we think of rodents, small animals come to mind. But the biggest rodent ever was the size of a buffalo and used its teeth like an elephant.

Josephoartigasia monesi was a giant rodent that lived in South America around 3 million years ago. It was like a capybara on steroids – it weighed up to a ton and was as big as a buffalo. While most rodents today use their characteristic incisors to gnaw on tough plant matter, Josephoartigasia may have used them for a different purpose.

Researches from the University of York and the Hull York Medical School investigated the bite strength of the giant rodent. Using computer modelling, they were able to create a virtual replica of its skull and find out that it could produce a lot of force with each bite – around 1400 N, which is similar to a tiger’s.

However, they also found that the rodent’s incisors could withstand almost three times that force, which means the giants weren’t using their teeth just to bite. Dr. Philip Cox, who was involved in the study, suggests that the teeth’s ability to handle such amounts of stress is evidence that these animals could have been using their teeth as tusks in the same way boars and elephants use theirs today.

Those modern tusked animals can use their enlarged teeth for a variety of purposes, such as digging for food, opening paths through vegetation, stripping the bark from trees and defending themselves from predators – activities that require the tusks to be very strong. It is likely that the record-breaker Josephoartigasia behaved in a similar way.