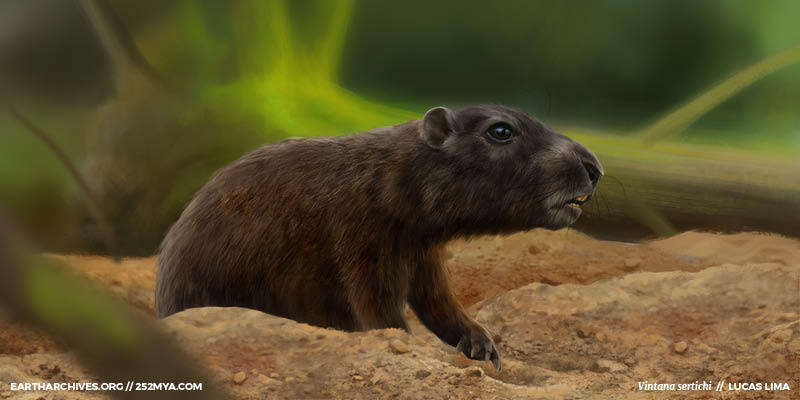 Prehistoric version of a marmot shared Madagascar with dinosaurs

All Posts
A 20-pound gopher-like mammal lived among dinosaurs in Madagascar around 66 million years ago, and its discovery shed some light on a very obscure group of animals.

Today Madagascar is, much like Australia and other isolated landmasses, a place of very special animals. With a mix of African fauna and a lot of creatures found nowhere else, it is a hotspot of unique biodiversity. Madagascar’s long history of isolation goes back almost 90 million years, and so does its tradition of having peculiar inhabitants.

Madagascar was once part of a massive land called Gondwana, which was itself part of a supercontinent called Pangaea. Pangaea was essentially formed by all known continents combined in one single territory, but around 200 million years ago a rift divided Pangaea into Laurasia to the north and Gondwana to the south. A few million years later Gondwana further broke apart into most of today’s southern continents: South America, Antarctica, Africa, Madagascar and Australia. It also included the Arabian Peninsula and India, which eventually moved up north.

An ancient group of mammals called Gondwanatheres (“beasts of Gondwana”) lived on these southern landmasses. Previously, these animals were only known from isolated teeth and jaw fragments, which made it hard for scientists to learn much about them. All they knew was that the animals were mammals and, due to the apparent differences between them and the mammals found in the northern hemisphere, they had evolved after the supercontinent split apart during the early Jurassic period.

This changed in 2010, when a group of paleontologists went searching for fish fossils along Madagascar’s west coast and accidentally brought a sandstone slab containing a strange skull to their lab. The creature to which the skull belonged was named Vintana, meaning “luck” in the Malagasy language, and it was a lucky find indeed.

Vintana could be identified as a member of Gondwanatheria because of specific features that tie it to the group. But contrary to the previous fossils of Gondwanatheres, the skull of Vintana was mostly complete and wonderfully preserved, giving paleontologists invaluable insight into the anatomy and lifestyle of this peculiar mammal family.

Vintana was a big gopher-like animal that lived in the island’s coastal floodplains. It could possibly reach 20 pounds, placing it in the heavyweight category of mammals by the standards of the time. It had huge cheekbones that served as attachment for presumably powerful jaw muscles, allowing it to tear apart tough vegetation. Judging by its braincase, around 14% of its brain was dedicated to interpreting smells. Large eye sockets mean it could see well in dim light, and sensitive inner ear anatomy indicates it could hear high frequency sounds.

It had an interesting combination of primitive, almost reptile-like features combined with very unique characteristics, such as the teeth, that must have evolved while it was isolated from its relatives in Madagascar. Researchers could also compare Vintana’s skull with fossil mammals from the northern hemisphere called Multituberculates, and concluded that the mammals and Gondwanatheres shared a common ancestor.

All of this knowledge was attained by the accidental discovery of a single well-preserved skull. Skulls are often considered the most exciting thing for a paleontologist to find because of the amount of information they contain. However, there’s still a lot about the weird marmot-like Vintana that we still don’t know. Was it a burrower like the rodents it resembled, or a semi-aquatic animal akin to a beaver? Did it lay eggs like a platypus, or did it give live birth?

We may not be able to answer these questions until we find more complete remains. But what we do know is that Vintana was part of a very successful lineage of mammals whose range covered half of the world for millions of years, and that it shared its island habitat with equally strange and distinct dinosaurs.


Related Stories
The biggest rodents in the world used their teeth as tusks
Early primates went extinct in North America - But why?
New Zealand’s 25 million year old “Dawn Whales”
What would you get if you mixed a dog and a bear?
North American mammoths likely interbred with one another
//sulc.us/k07kw
/articles/fossil-from-dinosaur-era-reveals-big-mammal-with-super-senses/