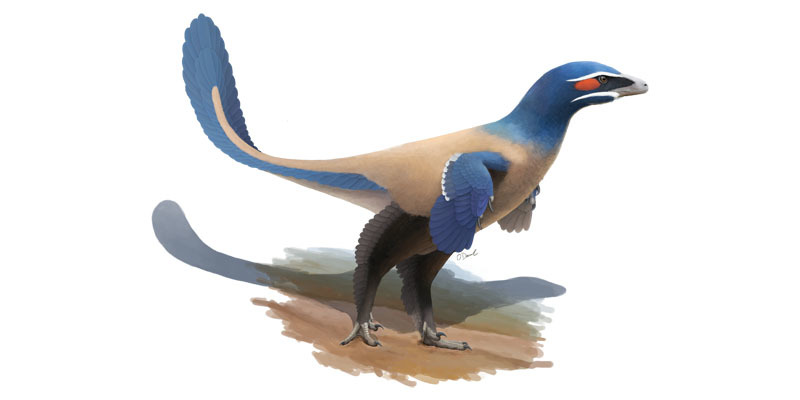 All Posts
The badlands outside of Drumheller, Alberta is a famous graveyard of giant Late Cretaceous dinosaurs. A detailed study of skull bones has revealed a new species of small predatory dinosaur.

A feathered “raptor” dinosaur, Albertavenator curriei, has been discovered in 71 million-year-old rocks outside of Drumheller, Alberta. It was named by paleontologists David Evans and colleagues, with the name meaning “Alberta hunter” in Latin. The species name honors legendary Canadian paleontologist Phil Currie.

Albertavenator is a troodontid, one of two families of Cretaceous “raptor” dinosaurs with raised sickle claws on their feet. Troodontids were relatively small hunters, usually chicken- to swan-sized. They were covered in feathers from snout to tail tip, and their arms resembled clawed bird wings. Troodontids had longer feet and smaller sickle-claws than their cousins the dromaeosaurs, like Deinonychus and Velociraptor. These differences show that troodontids were quick hunters of small prey and dromaeosaurids were slower hunters of larger prey.

Only a few bones are known for Albertavenator: portions of the skull roof and lower jaw previously described as probably belonging to Troodon. Although fragmentary, comparison to other troodontids shows that Albertavenator is unique. When compared to its cousin Troodon, known from slightly older rocks in Alberta and Montana, Albertavenator had a shorter snout and wider face.

Albertavenator was discovered in rocks of the Horseshoe Canyon Formation in Alberta. Although badlands and prairie today, 71 million years ago southern Alberta was much different. The shores of shallow sea stretching from the Gulf of Mexico to the Arctic Ocean ran through the province. The coastal plain was blanketed by a lush temperate forest, it was crossed by numerous rivers and was swampy in areas. Overall: the environment would resemble areas of modern day South Carolina.

The Horseshoe Canyon Formation has been known to paleontologists for more than a century and is one of the most productive dinosaur-bearing rock units in the world. Fossils of armored dinosaurs, horned dinosaurs, duckbill dinosaurs, ostrich dinosaurs, and tyrannosaurs are common. Less common are skeletons of smaller dinosaurs, like Albertavenator and other “raptors.” Lead author David Evans said, “The delicate bones of these small feathered dinosaurs are very rare. We were lucky to have a few characteristic bones useful for distinguishing species in this fascinating group.”

That doesn’t mean that they were rare during the Cretaceous Period, however. Troodontid skeletal material is uncommon in Upper Cretaceous rocks in Canada, but Troodontids are well known from hundreds of shed teeth found in several different formations. Detailed analysis of troodontid teeth from the Horseshoe Canyon Formation – home to Albertavenator – and older Dinosaur Park and Judith River Formations – home to Troodon – shows that they’re all so similar that they can’t be distinguished.

This suggests that there may be a larger number of troodontid species present in Upper Cretaceous rocks in North America than currently recognized. Only through comparison of their rare skeletal remains can they be differentiated, as was done with Albertavenator.

Further discoveries will help verify this prediction. Although the area around Drumheller has been extensively explored, new discoveries are still being made. Speaking of what’s next, Evans said, “We hope to find a more complete skeleton of Albertavenator in the future.”

Read the original research in the Canadian Journal of Earth Sciences.