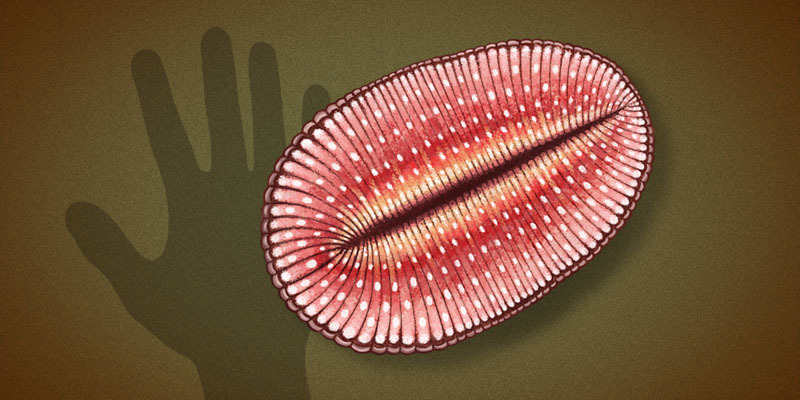 All Posts
Researchers examining the pattern and rate of growth in the mysterious “quilted” organism Dickinsonia have shown that new segments appear to grow from a wedge-shaped section at the blunt end. This adds to a growing body of data showing that Dickinsonia, and possibly other “quilted” Ediacaran organisms were among the earliest animals.

The Cambrian Period is famous for the explosive emergence of animal groups in a short period of time. Less well-known to the public is the earlier Ediacaran Period, home to some of the earliest organisms visible to the naked eye. They come in a variety of shapes and sizes, but many are flat and appear to be made of repeated units, looking like weird air-mattresses or quilts.

Just what those Ediacaran organisms are related to has been the focus of much debate since their discovery. Possible relationships included representing living animal groups, lichens, fungi, a completely extinct multicellular kingdom, or gigantic single-celled organisms. Paleontologists Renee Hoekzema and colleagues have conducted research showing that at least one of these strange organisms, Dickinsonia, is an animal. 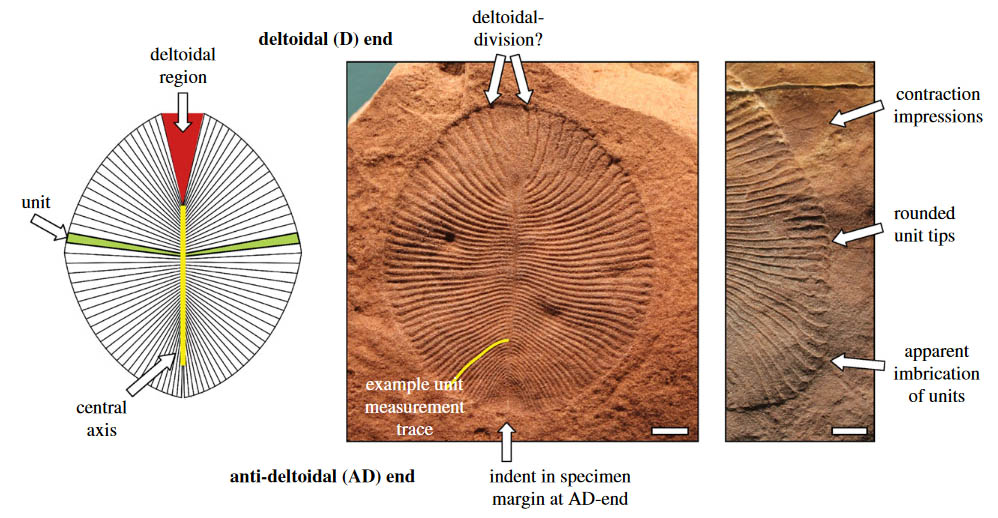 
Hoekzema and colleagues sought to determine where new units came from as Dickinsonia grew. Did they emerge from the deltoidal region, or from the other end, which they call the anti-deltoidal region? To do this, they examined 20 specimens of a variety of different sizes and measured the dimensions of the individual units and the wedge-shaped deltoidal region.

This is different from most previous ideas about growth in Dickinsonia, which considered the units at the anti-deltoidal end to be the newest simply because they are smallest.

The authors note that growth by adding tissue near (but not at) one end is consistent with what’s seen in some animals, but not seen in other organisms. Hoekzema and colleagues also point to trace fossils showing Dickinsonia moving and changing shape, behavior only seen in animals. In animals that grow like Dickinsonia, specifically bilateral animals with left and right sides, the tissue is normally added at the rear end. This would mean that the deltoidal region is at the back end and the anti-deltoidal region would be the front end. 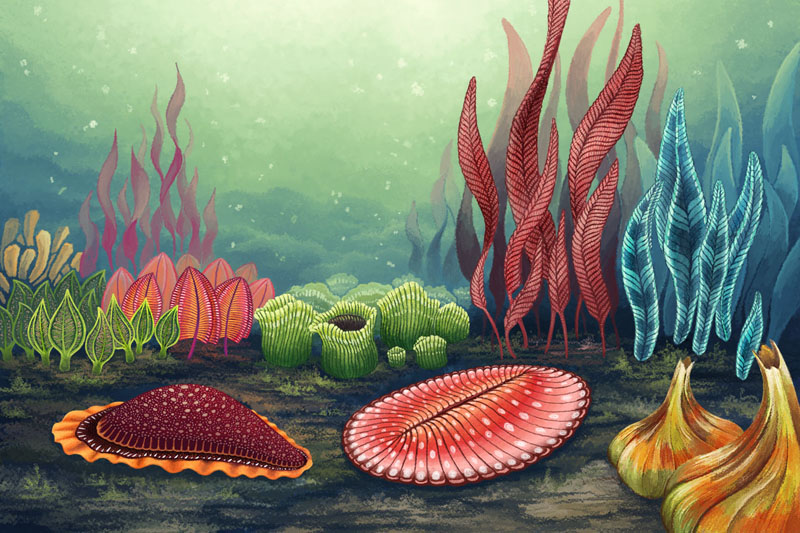 Dickinsonia is one of many strange Ediacaran organisms with “quilted” bodies. Image by Franz Anthony.


This brings the origin of bilateral animals back to the Ediacaran, 560 million years ago, and suggests that many other Ediacaran organisms with similar quilted anatomies may also be early bilateral animals. The researchers could not assign Dickinsonia to any modern group of animals, and it may instead be part of an extinct early lineage. Further research on other Ediacaran organisms can determine if they grew in the same way as Dickinsonia and if they were also animals.

Read the original research in Proceedings of the Royal Society B.