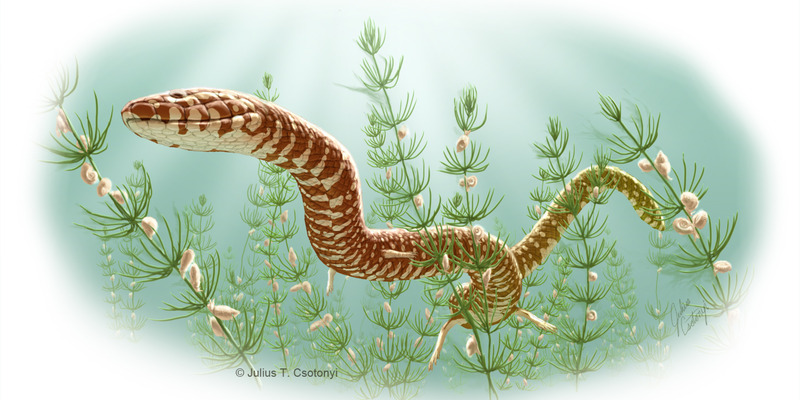 A study led by Michael Caldwell, from the university of Alberta in Canada, has shed new light on the evolution of snakes from their legged ancestors. Four fossils found in England, Portugal and the United States that were previously thought to be lizards have been reevaluated and shown to actually be early serpents.

The new fossils were dated to 143-167 million years ago, pushing back the date of the earliest known snake by more than fifty million years. The fossils also contradict a theory which suggested that the characteristic long and thin facial structure of snakes evolved only after the loss of the legs.

The history of this discovery hails back to the 1990’s, when a very fragmented reptile fossil was found in England and interpreted to be a lizard, named Parvicursor. This finding was used as the basis for identifying three subsequent fossils uncovered in other parts of the world, all similar to Parvicursor and so thought to be similar lizards.

Fossils of early snakes had already been found around the world, from Africa to Europe and the Americas. However, even though those were clearly different than modern serpents – many of them still having vestigial limbs – they all showed some advanced features that hinted at a hidden lineage of even more primitive snakes that had yet to be found.

It was only recently that Caldwell, a snake specialist, found the Parvicursor fossil by chance in a drawer at the National History Museum in London. Analyzing the skull fragments and vertebrae, Caldwell could identify key snake-like features including sharp, backwards-pointing teeth. He realized that Parvicursor was actually a Jurassic snake and so were the other fossils, which came to be known as Portugalophis, Diablophis and Eophis.

Interestingly, the fossils were found to be similar to the most primitive-looking modern snakes, like Cylindrophis from Southeast Asia. Those serpents, which probably diverged from other snake groups early in their evolutionary history, don’t show the same level of mobility in their skulls as pythons or boas.

The search is now on for even older snakes, which would probably look almost indistinguishable from lizards except for the key features of the skull that Caldwell found.