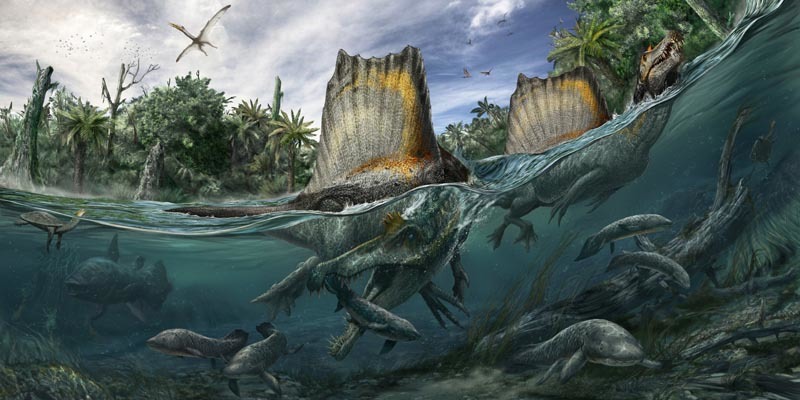 Cracking the secrets of Spinosaurus

All Posts
Ninety-five million years ago, a gigantic predatory dinosaur roamed the swamps and riversides of the prehistoric Sahara. For more than a century, Spinosaurus aegyptiacus took on many forms as scientists struggled to reconstruct it. Now with new material, there might be a chance to end it.

The first partial skeleton of the popular Spinosaurus was discovered in 1912 by fossil collector Richard Markgraf in an area in Egypt known as the Bahariya Oasis. It would be three years later until the new animal would be named and described, by aristocrat and paleontologist Ernst Stromer. The pair were part of the same expedition, exploring the harsh landscape at a time when the science of paleontology was still in its childhood days.

Fossils of fish and crocodiles revealed a lush and fertile coastal swamp at Bahariya, and the most mesmerizing discovery of all was a dinosaur’s backbone. They bore tall, thick spines on top of the centrum, or the body of the individual vertebra. Stromer described it three years later. He called it Spinosaurus aegyptiacus, the “spine lizard from Egypt” after its locality and the tall vertebral spines. There was no skull, no tail and no limbs; just a selection of vertebrae from the back, two from the neck and a bit of lower jaw. Measurements by Stromer suggested that the beast was immense. His writings indicated a creature even bigger than Tyrannosaurus, then thought to be the largest meat-eating dinosaur. It was clearly the largest terrestrial carnivore ever, but it was not just the animal’s size that set it apart from the rest.

The real strangeness lay in Spinosaurus’ back of course. Stromer’s theory about the 1.65-meter ‘spines’ in its vertebral column was that these formed a fatty hump like a bison. It was a feature never before seen in a carnivorous dinosaur at the time and certainly demanded more attention. A more thorough look at these spines would be impossible for a while, though. In 1944, nearing the end of the Second World War, the Bavarian State Collection of Paleontology where the fossils were housed was destroyed by a British bombing raid. The attack also destroyed nearly all of the original Bahariya fossils, including many other dinosaur species. 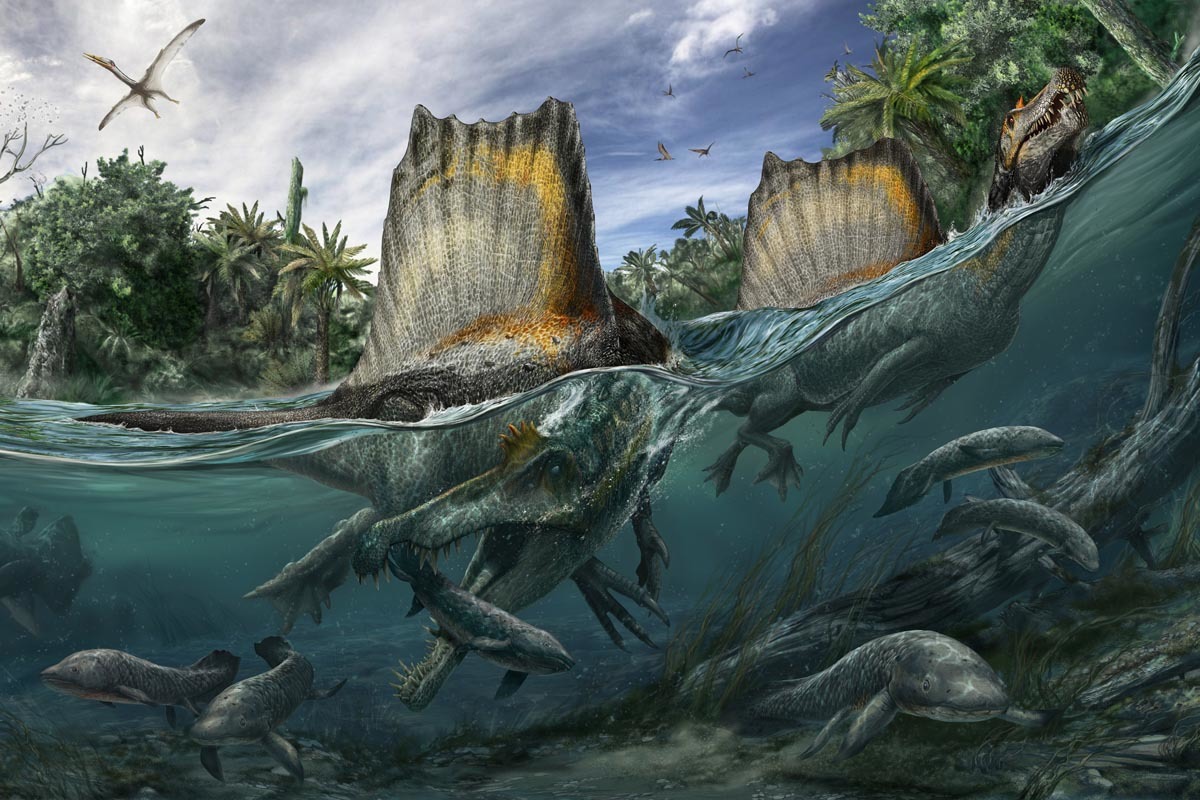 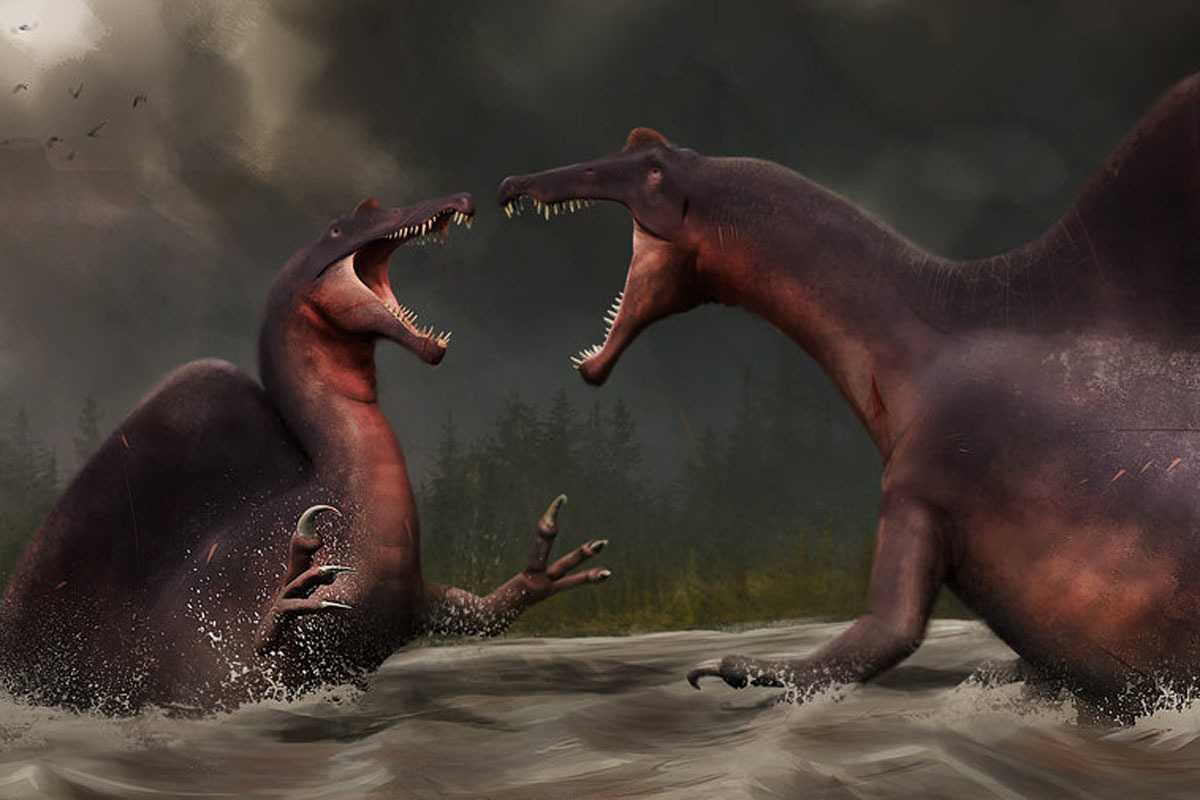 Thus many important specimens were lost to science forever. Stromer’s drawings and notes describing the animal’s remains survived, and Spinosaurus began to slowly enter the public consciousness. Thus began the mysteries surrounding the animal. For many years the tall spines were interpreted as being part of a very tall sail. It was something that not many had heard of, and the lack of any remains became more of a frustration than ever before.

Subsequent finds of course, would reveal its true nature as a fisherman. It was seen as wading into swamps and rivers to grab fish with a set of hooked claws. Instead of a sail, it was given a rather humped back. This made for a powerful and stocky animal with a slim, gharial-like head.

That would be all it was, until a new series of discoveries published in the journal Science on September 26th, 2014. The paper, titled Semiaquatic adaptations in a giant predatory dinosaur, revealed something extraordinary. For one, these new finds were much more complete than any other Spinosaurus specimens, and several were discovered in the Kem Kem beds of Morocco.

Kem Kem was markedly similar to Bahariya and was just as diverse, if not more so. There was a thriving coastal ecosystem here, similar to today’s mangrove environments, and Spinosaurus fossils had been found here before. The primary author of the new paper Nizar Ibrahim, from the University of Chicago and a National Geographic Society Emerging Explorer described the place as a river filled with massive fish. There were larger versions of coelacanths, lungfish, sawfish and others in the Kem Kem during the Mid Cretaceous, perfect victims for Spinosaurus.

Other members of the Science article team include Paul Sereno, fellow University of Chicago-based paleontologist, National Geographic Explorer in Residence and discoverer of many new African dinosaurs. Sereno mentions about the animal’s place in it ecosystem, “Spinosaurus is subaquatic by many traits; probably the Asian spinosaur Ichthyovenator will be more an intermediate to the more terrestrial Baryonyx and Suchomimus”, speaking about the creature’s better-known family members.

The new Spinosaurus fell within the expected size range for the creature, around 15 meters in length, an expected measurement. Once again though, it was the animal’s body plan that made waves and not its dimensions. The Science publication mentioned the presence of backbone material, specifically from the area of the tall vertebrae on its spine. In the paper, the specimens were compared against two of the best-represented and most complete spinosaurids.

These were Baryonyx from England and Suchomimus from Niger, both rather distant relations that lived somewhat earlier than Spinosaurus. Most interestingly though, the animal’s limbs had been found and it was these that shocked the world. Rather than being the humpbacked beast of the mid-2000s, Spinosaurus was a sail-backed, long-tailed predator with a pair of incredibly short, stubby legs. Or so the Ibrahim and Sereno paper suggested. Sereno himself mentions that both Baryonyx and Suchomimus have the robust hips that the more evolutionarily derived Spinosaurus lacked.

Not only was Spinosaurus a highly evolved fish-eater, it was also one that seemed so well-adapted to life underwater that it had sacrificed the strength and size of its hindlimbs. This soon began to raise questions about how the animal would move on land and in the water, and whether it could walk on land on just two legs or not.

The 2014 paper was met with both a great deal of praise and backlash, especially online when others tried to reevaluate the data presented. Of course, the backlash against the new look was incredible, with several other scientists making a their claims about the new specimens. Some sought to reconstruct a possible lifestyle for the animal while others regarded the find with a good deal of suspicion. One such attack came from artist and scientist Scott Hartman. Soon after the publication he attempted a reconstruction of the skeletal diagram displayed in the Science paper. The primary concern surrounding this specimen and its implications is simple: The animal’s locomotion on land.

Hartman mentions that the animal was reconstructed as a knuckle-walker like a gorilla or an anteater, with the legs being far too small to bear the creature’s huge weight. One of the problems with this hypothesis is that no carnivorous dinosaur had fingers and hands strong enough to allow a knuckle-walking stance. All theropod dinosaurs (birds, Spinosaurus, Tyrannosaurus and others) have palms that face inwards, also unsuitable for bearing weight. They are unable to bend or pronate their hands and wrists in nature. While he mentions the thickened leg bones of the dinosaur as an interesting feature, he also asserts that such a feature does not have to mean a completely four-footed animal.

“My biggest objection is that Science allowed Figure 2 to be presented as it was in the main paper. That one purports to show known bones in red and unknown bones in gray. But "known" bones include not just Romer's material and the new Morocco material but isolated elements they used and even bones that are taken wholesale from Baryonyx (despite Spinosaurus ostensibly being radically different from Baryonyx), in the latter cases it is impossible to scale the elements appropriately”, adds Hartman again. “That image implies a far greater degree of confidence in their whole-body skeletal reconstruction than is possible from current remains.”

Thus, the new skeletal by Scott Hartman, published on his site, features a rather different look to the knuckle-walking Ibrahim and Sereno model. This time the hind legs are scaled up by a good deal, resulting in a still short-limbed but somewhat more conventional-looking animal. It would still be a fisherman though, with its long snout and set of conical, dolphin or gharial-like teeth.

He specifically talks about penguins, which also have the thick bones of a water-based hunter, but are certainly unable to move on all fours. Sereno though, hit back later, adding that he never specifically mentioned a four-legged stance for the animal. For now, one mystery was put to rest.

However Hartman would not be the only one to question the new specimens. While his additions to the new model are notable, they are not the most radical ones to be put out during the so-called ‘Spinosaurus reboot’. Another change came later during the year when Italian paleontologist Andrea Cau created a new model for the theropod. This is the more curve-necked and duck-like model that became popular just after Hartman’s horizontal biped and the Science paper’s four-footed knuckle walker. Cau mentions that the curved neck of his model is to illustrate the animal's possible range of motion. Again, he draws comparisons to other fishing birds like cormorants and penguins.

Sereno of course, the describer of the new remains, is hardly pleased. He adds later, "The speculation on spinosaurus by Cau and others, as well as a Cope-and-Marsh like fanaticism of describing new dinosaurs on isolated bones without known localities has the Kem Kem as the supernova of theropod diversity. Usually no mention whatsoever is made of the very different sites that have produced spinosaurus material or material of very closely related taxa Egypt and especially Niger. The latter is quite far away from the ocean by comparison to the Kem Kem and yet you get many of the same or similar taxa. The musings about separation in space I find to be just that, musings based on little evidence."

His reconstruction thus stands and Spinosaurus will possibly continue to be revamped as the years go by. Sereno, Hartman and Cau are not the first to battle over the exact proportions of a dinosaur or any extinct creature. Spinosaurus itself has had such a huge impact on pop culture that the need to evaluate and reevaluate any new data has become a hugely important thing to many academics.

Hartman, Scott, 2014, There may be more fishiness in Spinosaurus.

Special thanks to Paul Sereno, Andrea Cau, and Scott Hartman for their answers to our questions.