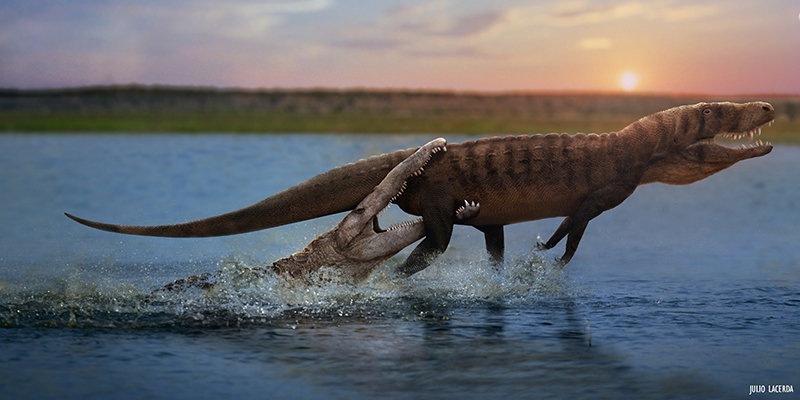 Clash of the Triassic titans

All Posts
Battles between big carnivores are a rarity in the fossil record. One find from Triassic rocks in New Mexico reveals something incredible. It is a life-and-death duel between two of the era’s most powerful hunters.

Finds of carnivores preying on one another are rare in the fossil record. Yet for two big Triassic reptiles, a case of predation has shown a great deal about how their rather carnivore-heavy ecosystem may have worked. The victim is a rauisuchian, a largely terrestrial carnivore while the attacker is a phytosaur, a reptile once thought to have been highly aquatic. Both animals are crocodile-like archosaurs or crurotarsans. Remains of the duel between the two creatures were scientifically described by Dr. Stephanie Drumheller from the University of Tennessee at Knoxville, and Michelle R. Stocker and Sterling J. Nesbitt of Virginia Tech.

The well-known Chinle Formation has revealed one of the best Triassic assemblages ever, dating back to about 210 million years ago. At the time the supercontinent of Pangaea was still around, with the Chinle having preserved one of the wetter regions of this massive landmass. The area was full of life, including some of the early dinosaurs and conifer trees towering 60 meters in height.

The research was published in the November 2014 issue of the German scientific journal Naturwissenschaften. Evidence of the conflict comes from the rauisuchian’s incomplete femur, in which the phytosaur’s tooth is still embedded. This initial attack proved not to be fatal, with the tooth having broken off. The injury seems to have healed over time. CT scans and 3D models of the bone showed that the same animal had been attacked not once but twice by phytosaurs, a surprising turn of events. 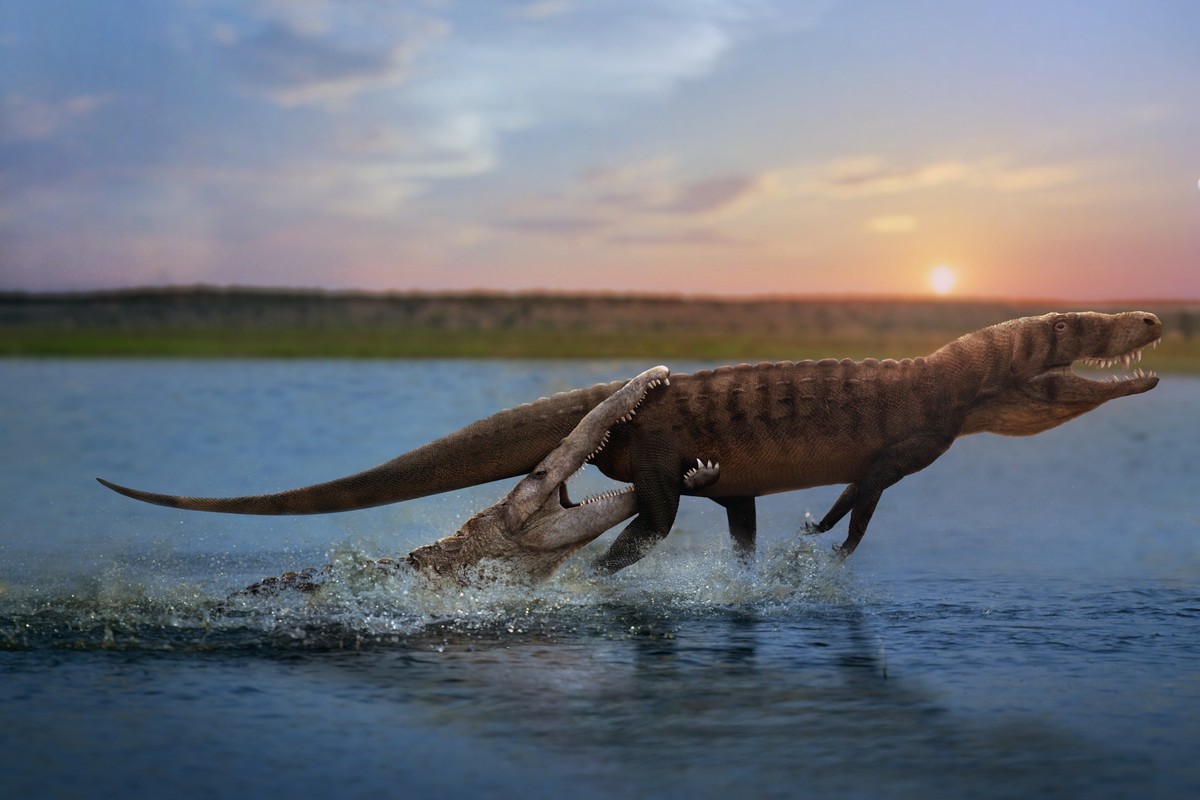 Phytosaur vs rauisuchian
An attacking phytosaur gets ready to close the deal on a fleeing rauisuchian in the middle of a Triassic river.
Julio Lacerda

It was the second phytosaur that had finally managed to kill its intended victim. According to Dr. Drumheller, the find also suggests something about the relationships between all the carnivores of the Chinle Formation. This kind of "intraguild predation" happens between carnivores of two different trophic levels or niches in the environment. The Chinle ecosystem, according to the study, was filled with larger carnivores and very few big herbivores. To the team, this was somewhat of a perplexing issue.

Normally, the prey animals outnumber the bigger predators ten-to-one. Yet in an environment like Chinle it is possible that intraguild predation was higher due to the huge concentration of carnivorous animals. The carnivores were thus feeding on one another, and getting past the niche partitioning that would normally allow such animals to coexist. This kind of ecosystem may seem out of balance but the Chinle environment lasted for many millions of years during the Late Triassic. It was thus a healthy ecosystem that certainly worked.

According to the researchers it was thought earlier that phytosaurs were simply aquatic hunters, and that they lived in separate niches to their rauisuchian neighbors. They were roughly similar to crocodiles in their general look, with low-slung bodies and short legs. However their gaits were also much more erect than those of crocodilians and they could possibly hunt on land quite easily.

The Chinle find simply confirms this idea. Drumheller suggests that the attacking phytosaurs were roughly 6 or so meters long. Thus they were somewhat smaller than their intended victims, an added surprise. We also do not know what drove the phytosaur to attack a creature somewhat larger than itself.

As for the rauisuchians, these were short-legged animals with a somewhat erect and flat-footed stance. They had strong, boxy skulls and blade-like teeth and possibly resembled a warped version of a carnivorous dinosaur. It is possible that the unnamed rauisuchian bones might come from an animal roughly 8 meters long, at the uppermost end of their family size scale. The animal may have been similar to several well-known South American species like Saurosuchus and Fasolasuchus both in terms of appearance and dimensions.

Read the original research in Naturwissenschaften.