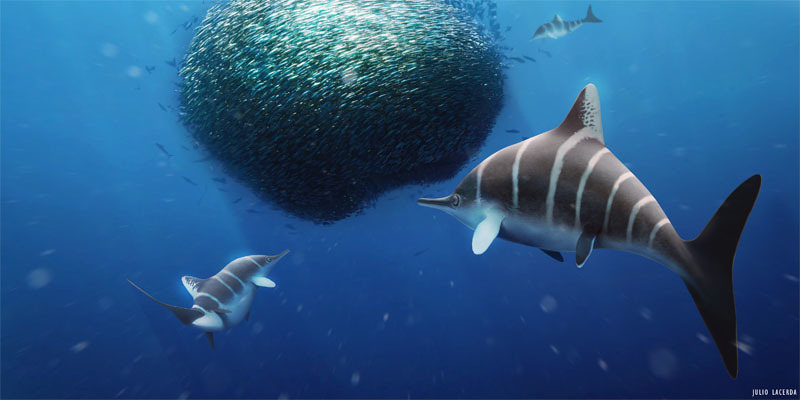 about 4 years ago by Dean R. Lomax

All Posts
As pieces of fossils steadily flow from the ground to museums and institutions worldwide, studies on old specimens are just as important as the new ones. Century-old collections often yield untold stories, lying in wait for someone to sit down and uncover their secrets.

Ichthyosaurs are extinct marine reptiles that superficially resemble dolphins and sharks, but are neither. They are most definitely not ‘swimming dinosaurs’. They were fully aquatic marine tetrapods that lived in the seas, while their more famous counterparts, the dinosaurs, roamed the land. They achieved a worldwide distribution. Remains have been discovered from the late Early Triassic to the early Late Cretaceous and over a hundred species have been described (Cleary et al., 2016).

The coastal town of Lyme Regis, situated on the south coast of England in Dorset, is seen often as the birthplace of ichthyosaurs. Many ichthyosaurs were collected from Lyme Regis during the early 19th century and were first brought to the attention of the scientific world by a fantastic pioneering woman in science, named Mary Anning.

The focus of this article is based upon perhaps the most famous ichthyosaur genus, Ichthyosaurus, which lends its name to the group. The first ichthyosaur to be scientifically recognized was Ichthyosaurus, and specimens collected during the 19th century were almost exclusively referred to that genus, resulting in over 50 different species assigned to it before 1900 (McGowan and Motani, 2003). Prior to my research, three species were considered valid: Ichthyosaurus communis (Conybeare, 1822), I. breviceps (Owen, 1881) and I. conybeari (Lydekker, 1888). 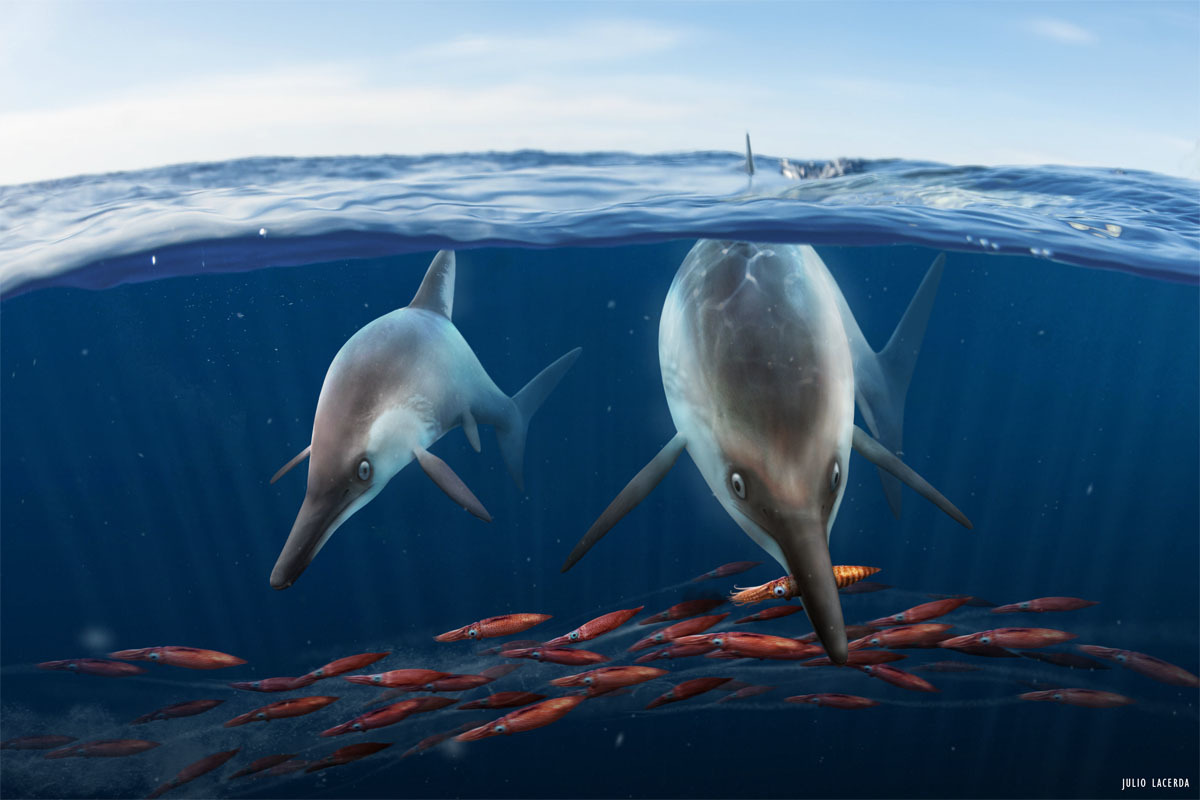 A pair of I. somersetensis in their natural habitat
Julio Lacerda 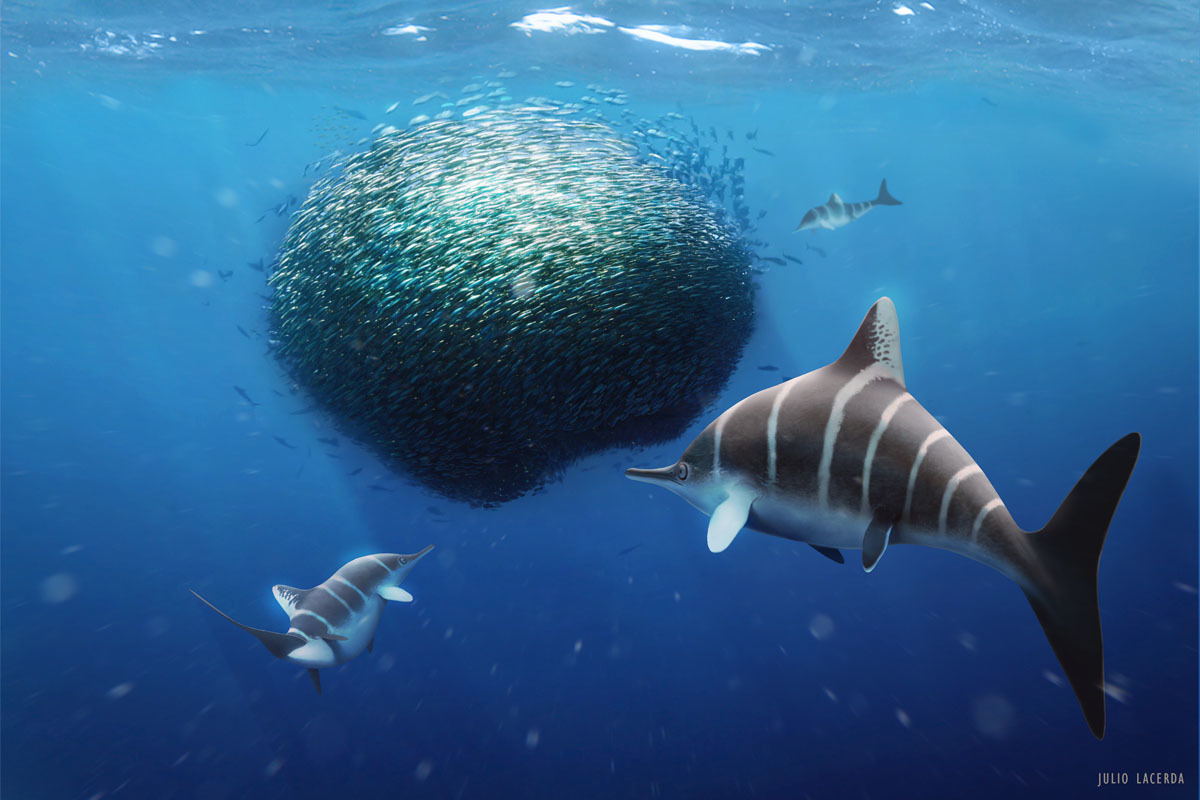 A group of I. larkini chasing after their prey
Julio Lacerda

Ichthyosaurus communis has for a substantially long time been considered a highly variable and ‘common’ species of the genus, resulting in the title of a wastebasket taxon. In brief, everything that cannot be readily identified as one of the other two species of the genus is regarded as I. communis. The genus has received little in the way of taxonomic study since the 1970s. The remains have not been examined in light of current views of ichthyosaur taxonomy, morphology and phylogenetic studies, which have greatly developed since the 1970s.

In 2008, I began researching the collections of my hometown museum, Doncaster Museum & Art Gallery in South Yorkshire, England. Unbeknownst to me, a paleontology collection, comprising wonderful fossils, had been awaiting rediscovery (see Bowden et al. 2014). On my very first day, I was shown a specimen of an ichthyosaur, but this ichthyosaur was thought to be a plaster copy. I immediately recognized that it was an original specimen and that it may be scientifically important. This specimen formed my first-ever peer reviewed publication, which described the stomach contents preserved with the ichthyosaur (Lomax, 2010).

Little information was recorded with the specimen and the location of discovery was unknown. However, I noted a single belemnite (squid-like animal) preserved in the matrix, next to the skull. The belemnite was identified and noted to have come from only one specific horizon in the world, exposed around Charmouth, Dorset. This rock layer dated to the Jurassic Period and to a time known as the Pliensbachian. Pliensbachian ichthyosaurs are rare and this specimen represents the world's most complete example on record. I determined that the specimen belonged to the genus Ichthyosaurus, but was unable to identify the species and believed it to be something unusual.

In 2010, after a couple of years of independent research, I teamed up with Professor Judy Massare of Brockport College, NY, USA, a renowned ichthyosaur expert. Together, we began a scientific adventure that would take up much of my academic research. 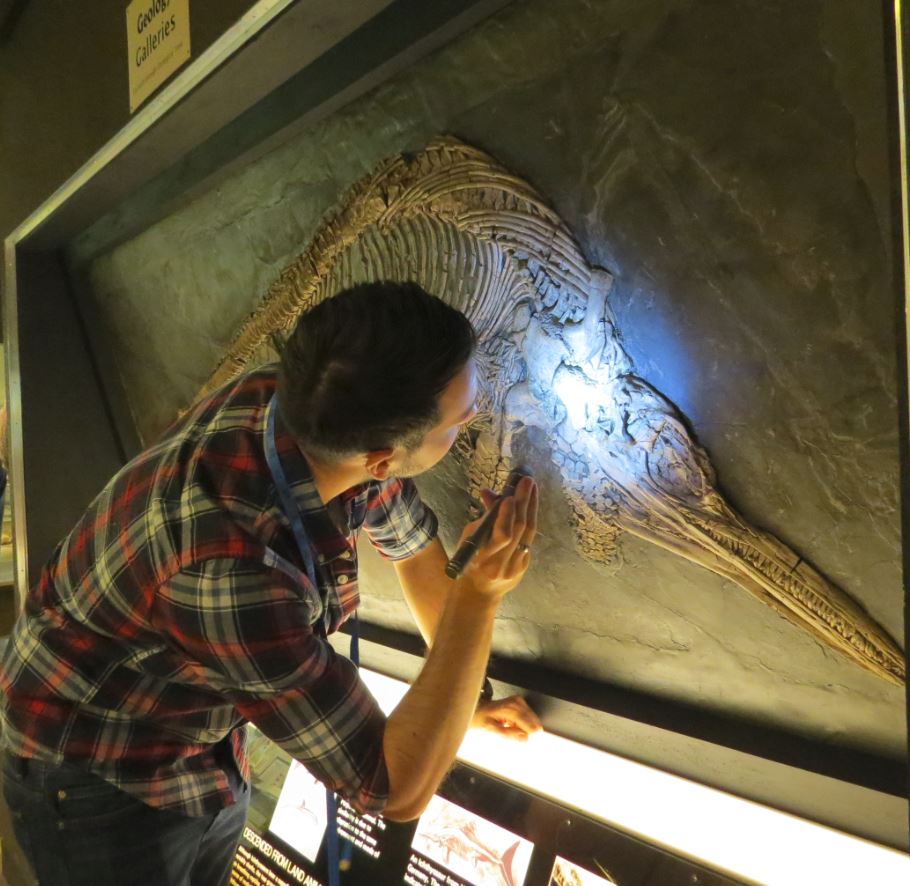 Ichthyosaurs possess many features that are morphologically distinct from one another, that is, features that can be used to distinguish among different genera and species. One key feature is their humerus (plural: humeri) bone, the upper arm bone. Together with Prof. Massare, we determined that the humeri of the Doncaster ichthyosaur specimen must be removed in order to assist in distinguishing the specimen as something new.

This delicate procedure was skilfully undertaken by paleontologist and preparator, Nigel Larkin. Nigel removed the two bones and created copies; the humeri were also CT-scanned at the Royal Veterinary College, London. Having the humeri removed from the rock allowed me to assess the bones in greater detail, which led to the identification of various unusual features. These features included a short, robust humerus with prominent dorsal and ventral processes; a femur with a proximal width almost as large as the distal width; and a very small femur relative to the humerus. Although one of the most unusual features was a circular ‘depression’ in the humerus, something never before reported in the genus.

In order to test our hypothesis of the importance of these new features, over the course of several years, we undertook numerous research visits to museums and universities across the UK, in Europe and the USA. This included the examination of, perhaps, over a thousand individual ichthyosaur specimens. The key focus was to compare features of the new species with those of other Ichthyosaurus specimens (and species), to assist in determining the new species as something distinct.

As part of the research, we identified four additional specimens, also from around the Charmouth/Lyme Regis area, which we were able to refer to the new species. Looking at ontogenetic features in ichthyosaurs (mature vs. immature characters), we determined that the Doncaster specimen was probably an adult, and the others represented a subadult and three juveniles. Yet, a problem occurred. Here, we had two groups of specimens, one showing all of the key features of the humerus, and the other showing all of the features of the new species, except those of the humerus.

Few studies on sexual dimorphism in ichthyosaurs have been undertaken, so we examined the record of sexual difference in the limbs of extinct and extant reptiles and found that several groups display distinct differences in limb shape between males and females. Thus, for the first time, based on morphology of the bones, it may be possible to differentiate between male and female ichthyosaurs.

What’s in a name?

As mentioned previously, many ichthyosaurs from Dorset were collected by Mary Anning. Mary lived at Lyme Regis, Dorset, and was the first person (ever) to bring ichthyosaurs, along with many other kinds of fossils, to the attention of the scientific community (Torrens, 1995). It was Mary and her brother, Joseph, who discovered the first ichthyosaur to be scientifically recognized, around 1811. No ichthyosaur has ever before been named after Mary and Judy and I wanted to change that. In honor of Mary, we named the new species Ichthyosaurus anningae. In fact, as a touch of serendipity, one of the additional specimens referred to our new species, held at the Natural History Museum in London, was even collected by Mary herself.

Growing up, I read about Mary’s life and discoveries and was inspired. Personally, it is truly an honor to name a new species, but to name it after somebody who is intertwined with such an important role in helping to sculpt the science of paleontology, especially in Britain, is something that I’m proud of.

Our extensive research was brought together and published in 2015 in the scientific journal, Journal of Vertebrate Paleontology (Lomax and Massare, 2015). The specimen tells an exceptional story, from initially being mistaken for a copy to representing a holotype of a new species.

In 2016, two of my scientific papers were published that described other new ichthyosaurs from the Early Jurassic of the UK, identified from specimens held in museum and university collections.

The first was the description of a rare specimen collected from a quarry in Nottinghamshire, England and stored in the collections of the New Walk Museum and Art Gallery, Leicester. This specimen included a partial skull and skeleton. I identified various features of the pectoral girdle and skull as unique, which distinguished this specimen from all known genera and species of Early Jurassic ichthyosaurs. I named the ichthyosaur Wahlisaurus massarae, in honor of my two colleagues and mentors, Bill Wahl and Judy Massare, who first introduced me to studying ichthyosaurs in 2008. It is the first new genus of British Early Jurassic ichthyosaur described since 1986 (Lomax, 2016). 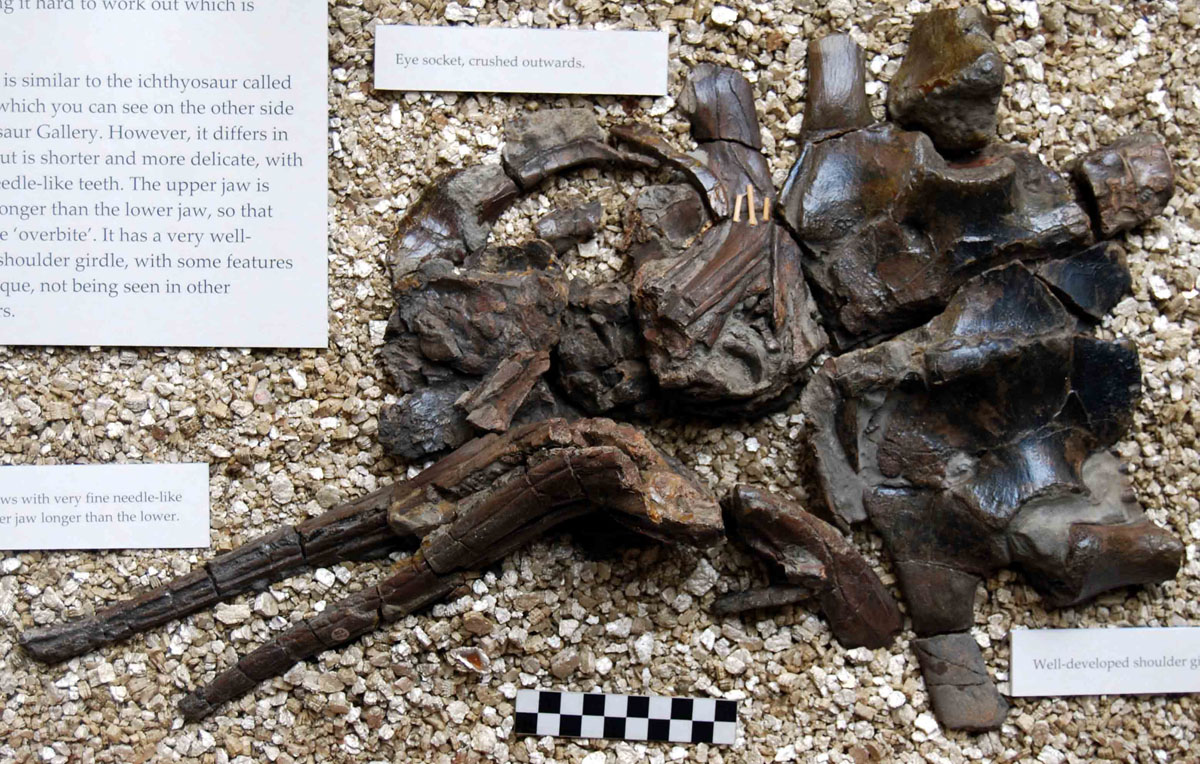 One of the new species was identified from a specimen at the University of Bristol – a complete skeleton which has been on public display in the School of Earth Sciences for many years. We called the species Ichthyosaurus larkini, in honor of British paleontologist (and colleague) Nigel Larkin, whose family has lived in Bristol and Somerset for hundreds of years. Scores of people must walk past this skeleton each and every day, yet its secrets have only just been revealed. 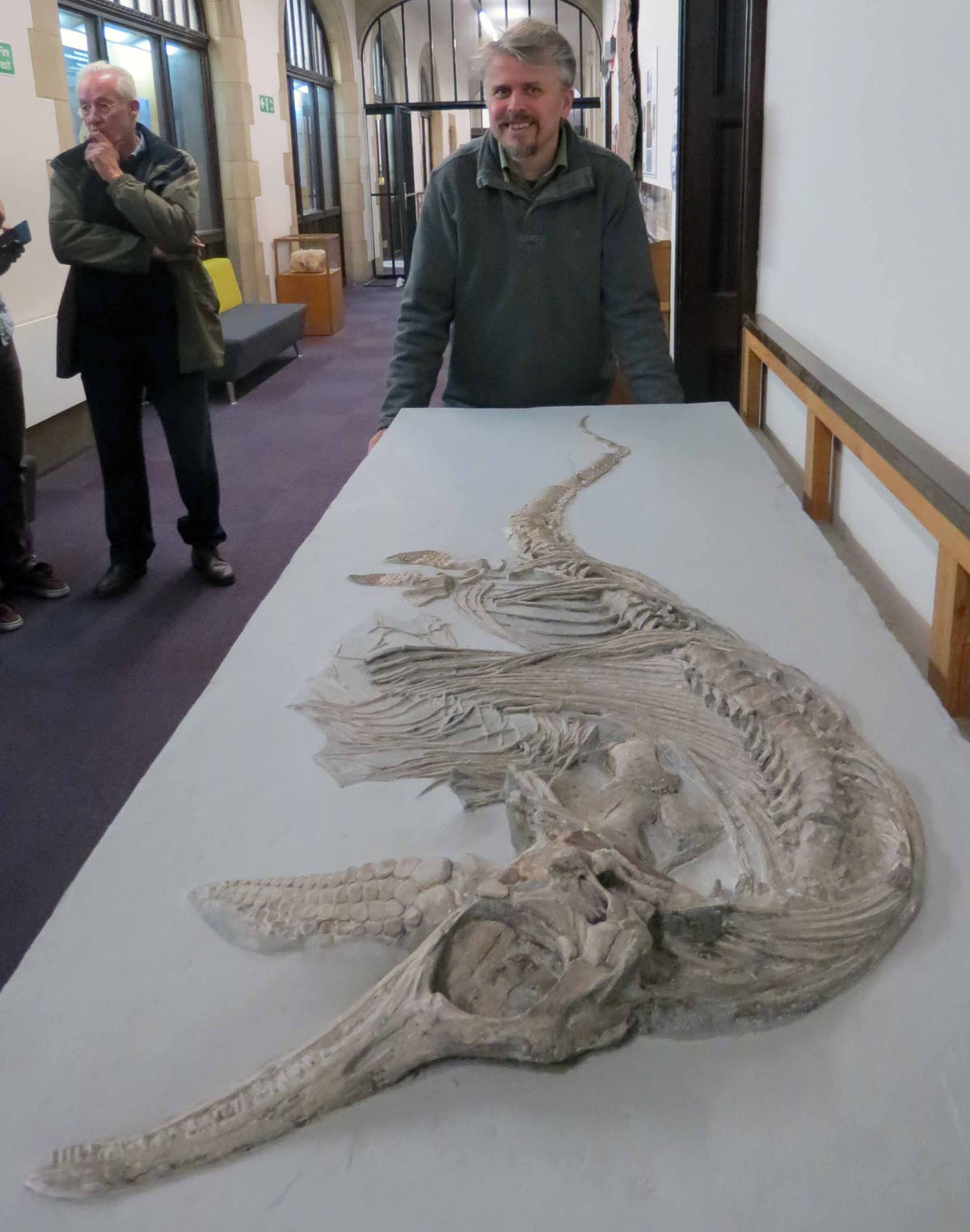 Nigel Larkin and the I. larkini holotype
Dean Lomax/the University of Bristol

The key specimen of the second species was probably collected from a quarry in Glastonbury, Somerset in the 1840s. It was sent to Delaware, USA, by Edward Wilson of Tenby, South Wales, for his brother, Dr. Thomas Wilson, who donated the specimen to Philadelphia’s Academy of Natural Sciences in 1847, where it has remained ever since. The specimen has been in storage, and few people knew that it even existed. The specimen represents, in my personal opinion, the best example of Ichthyosaurus ever collected. As many Ichthyosaurus specimens have been found in Somerset we decided to name this in honor of the county and called the species Ichthyosaurus somersetensis. The specimen is now on permanent display. Both new species are known from several, well-preserved examples.

New paleontological discoveries are not always made in the field or lab, but sometimes by re-examining previously found fossils. The discovery of Ichthyosaurus anningae, I. larkini, I. somersetensis and Wahlisaurus massarae demonstrates the importance of reexamining old collections. But, by also examining collections that are ‘unknown’ for a particular fossil group, because who knows what may just be waiting to change the scientific world as we know it. Think outside the box.

Dean R. Lomax is a palaeontologist and researcher at the University of Manchester, England, UK. deanrlomax.co.uk

The author and I. somersetensis holotype
Dean Lomax/Academy of Natural Sciences, Philadelphia, USA

Conybeare, W. D. 1822. Additional notices on the fossil genera Ichthyosaurus and Plesiosaurus. Transactions of the Geological Society of London 1, 103–123.

Lomax, D. R. and Massare, J. A. 2015. A new species of Ichthyosaurus from the Lower Jurassic of West Dorset, England. Journal of Vertebrate Paleontology.

Lomax, D. R. 2016. A new leptonectid ichthyosaur from the Lower Jurassic (Hettangian) of Nottinghamshire, England, UK, and the taxonomic usefulness of the ichthyosaurian coracoid. Journal of Systematic Palaeontology.

Lomax, D. R. 2010. An Ichthyosaurus (Reptilia, Ichthyosauria) with gastric contents from Charmouth, England: First report of the genus from the Pliensbachian. Paludicola. 8, 22–36.

Owen, R. 1881. Part 3. Ichthyopterygia. In A Monograph of the Fossil Reptilia of the Liassic Formations, pp. 83–134. Palaeontographical Society (Great Britain).

Lydekker, R. 1888. Note on the classification of the Ichthyopterygia (with a notice of two new species). Geological Magazine. 5, 309–314.