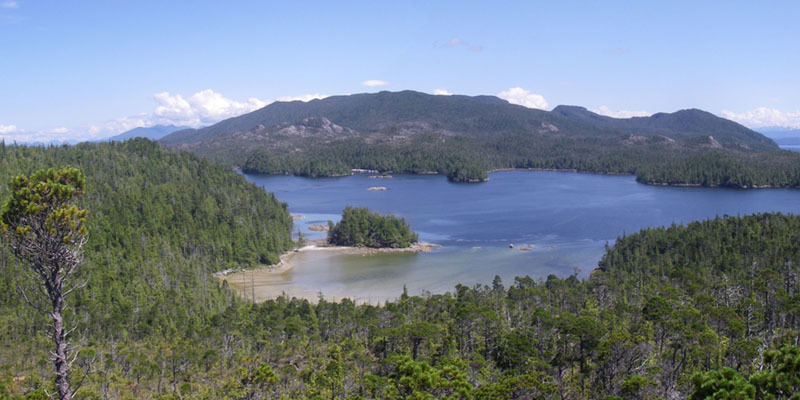 Canadian footprints support a coastal route for the first Americans

All Posts
Soils from an ancient meadow on a small island on the central coast of British Columbia preserve footprints of early Native Americans. Although most of the northern Pacific Coast was a wall of glacial ice at the time, pockets of forested land accessible by boat allowed early migrants to survive and thrive.

After humans spread from our ancestral homeland in Africa about 100,000 years ago, they spread throughout the Old World and by 20,000 years ago, they reached the Bering Land Bridge. Then they hit a wall. Of ice. Stretching from the Alaska Peninsula in the south all the way to the Arctic Ocean was glacial ice thousands of meters thick.

As the Ice Age waned, humans very rapidly entered North, and then South America, but there has been controversy about the route taken. One hypothesis supposes that early Americans traveled an ice-free corridor created by receding glaciers, walking east through Alaska’s Yukon River Valley, then south along the Rocky Mountain Front ranges into the Interior of the continent

The second hypothesis supposes that ancient peoples traveled along the West Coast living on rare ice-free islands and beaches. Most of the coast from the Alaska Peninsula to the mouth of the Columbia River was completely encrusted in glacial ice, so the only route to these refugees was by boat. 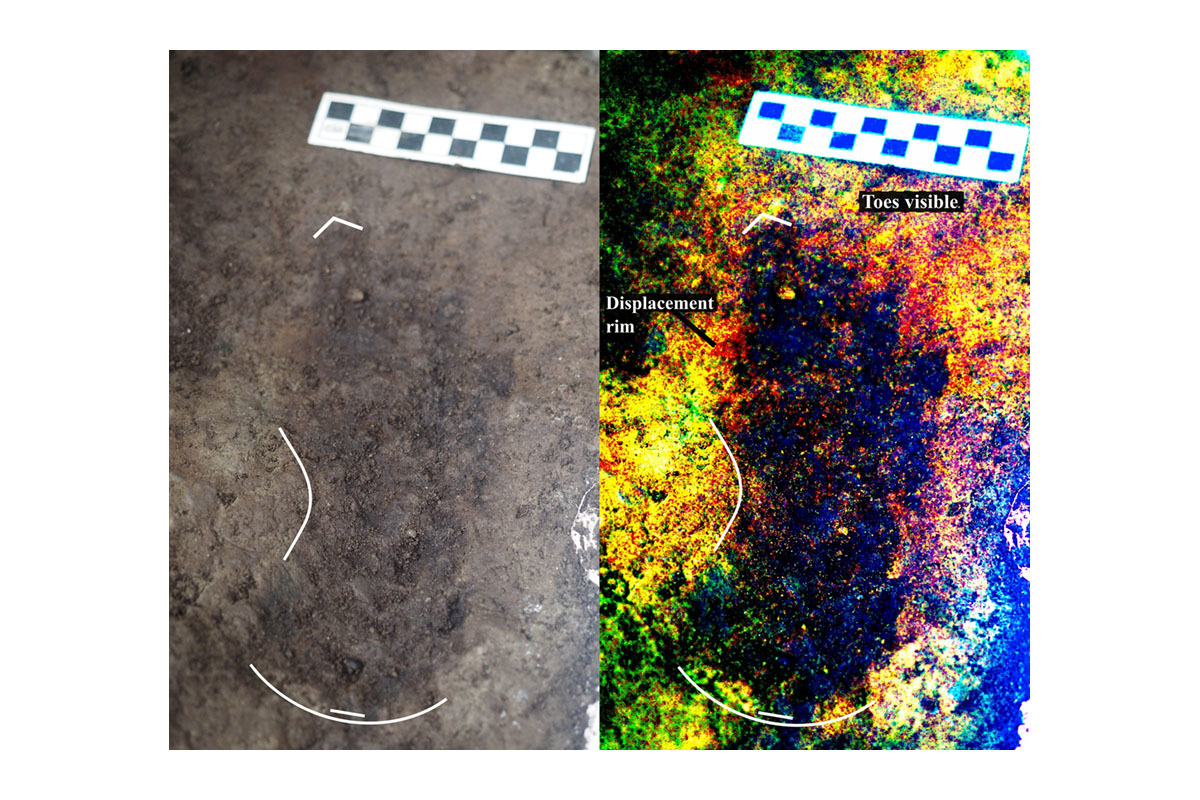 One of the 29 footprints from Calvert Island, unaltered (left) and digitally enhanced (right), showing the arch and toes of a human right foot.
Duncan McLaren 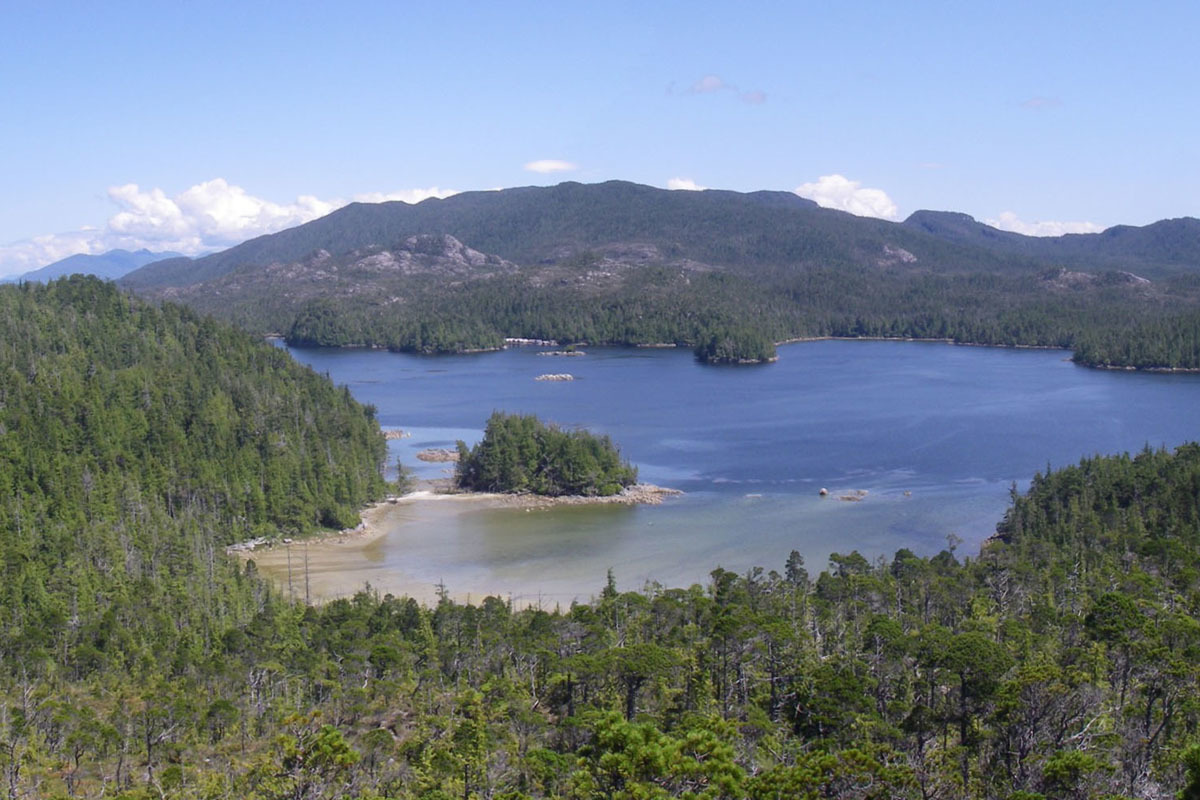 The 13,000-year-old human footprints were discovered on Calvert Island, B.C. under the sands of the beach in the foreground. At the time the prints were formed, sea-level was a few meters under current levels, and the location was a beachside meadow.
Jim Stafford

In 2018 archaeologists Duncan McLaren and colleagues described a new discovery of ancient footprints on Calvert Island off the central coast of British Columbia, that they say supports the coastal mariner hypothesis.

At the site on the north end of the island, the archaeological team have uncovered at least 29 mostly barefoot human tracks from at least three individuals, stone tools, and a depression lined with stones hypothesized to be a fire pit. The tracks were made in soft soil in an ancient beachside meadow, and were later infilled with beach sands which made them easy for the archaeologists to find. The location is now in a shallow, protected bay that is exposed during low tide.

McLaren’s team used plant debris in the tracks themselves to carbon-date the locality. They found that these prints were formed more than 13,000 years ago, during the Ice Age and a time when most of the coast was locked in ice.

Although sea levels during the last Ice Age could be 100 meters or more below current levels, the sea around Calvert Island has only risen a few meters above the Ice Age beach. This low relative sea level rise is mostly due to something called isostatic rebound. When glaciers cover continents the extra weight pushes the crust downward, but after the ice melts, the crust rises up again.

So as the ice melted, sea levels rose. And so did Calvert Island!

This isn’t always the case for the West Coast, however, and many Ice Age beaches and beachside environments are now deep under the waves of the Pacific, making archaeological exploration difficult at best.

McLaren and colleagues note this is one additional piece of data supporting the coastal migration route for the rapid invasion of the Americas. Other similarly aged archaeological sites on the West Coast have been discovered on Haida Gwaii off the northwest coast of B.C. (also known as the Queen Charlotte Islands) and the Olympic Peninsula in Washington State.

That doesn’t mean that the ice-free corridor is out as a hypothesis. Signs of human habitation from shortly after glaciers receded have been found on the proposed route. It’s possible ancient Native Americans took both pathways on their journey south into the human- and ice-free New World.

Further discoveries on Calvert Island, as well as other possible coastal refuges in Alaska, British Columbia, and Washington, will surely help archaeologists untangle the complex story of humanity’s first forays into the American wilderness.


Related Stories
Saber-toothed kittens were born bruisers
Stegodon, the “elephant” with sideways trunk
The last camels of North America
The dog-sized rats of East Timor
Weird mammals get a home in the tree of life
//sulc.us/lsbe5
/articles/canadian-footprints-support-a-coastal-route-for-the-first-americans/