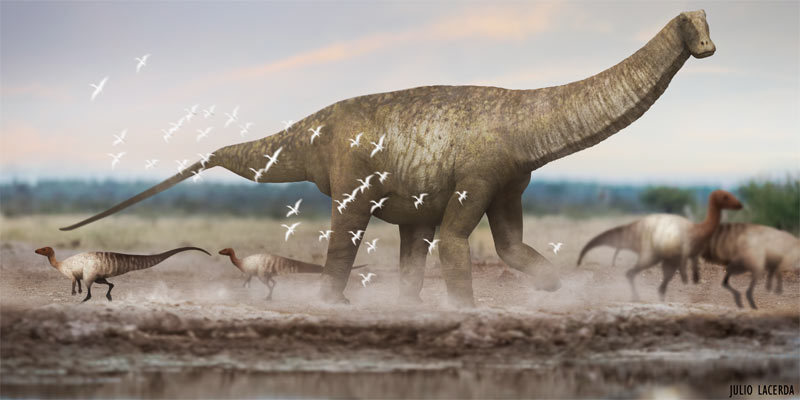 Brazil's biggest dinosaur gets a name

All Posts
Excavated in 1953 by paleontologist Llewellyn Ivor Price, the specimen is now known as Austroposeidon magnificus.

Titanosaurs were a hugely successful and diverse group of sauropod dinosaurs – giant long-necked herbivores – and are known from Cretaceous rocks all around the world. They are particularly abundant in the Late Cretaceous of South America, and include giants like 30-meter-long Argentinosaurus and 26-meter-long Dreadnoughtus, both from Argentina. Brazil was also home to a giant titanosaur, Austroposeidon magnificus, first discovered in 1953 but only named by Kamila Bandeira and colleagues in late 2016. 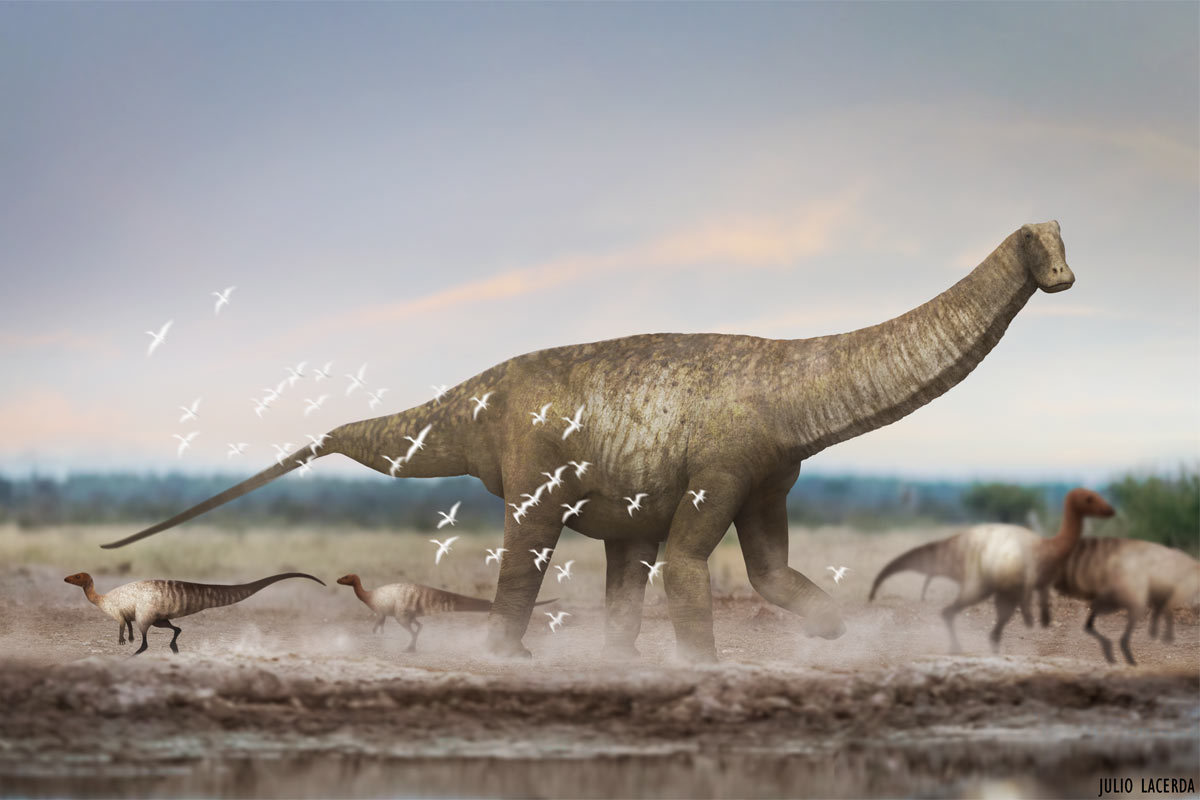 The only known specimen is made up of two incomplete cervical (neck) vertebrae, one cervical rib, one complete and seven fragmentary dorsal (back) vertebrae, and one fragmentary sacral (hip) vertebra. The specimen was deposited in what's known as a “crevasse splay” deposit, which happens when a flooding river breaks through or over-tops a natural levee and deposits sand and mud onto an adjacent floodplain.

Although the specimen is incomplete and was disarticulated, the authors are certain all the vertebrae belong to the same individual due to their similar size, condition, and proximity. By comparing the elements preserved in Austroposeidon to the same elements in other titanosaurs, Bandeira and colleagues determined that Austroposeidon was probably 25 meters long when complete and the largest dinosaur yet known from Brazil.

Sauropod dinosaurs had an extensive system of air sacs that ran throughout their bodies and created hollows and cavities on the exteriors of their vertebrae, as well as, in some cases, invading vertebrae and ribs with air sacs. In titanosaurs, the invasion of the vertebrae by air sacs is so extensive that the internal structure of the bone has become spongy. The cavities on the outside of the vertebrae are separated by thin sheets and struts of bone tissue, and Austroposeidon is differentiated from other titanosaurs based on fine details of these struts and sheets found on its cervical and dorsal vertebrae.

In order to determine where Austroposeidon lies in the family tree of titanosaurs, Bandeira and colleagues performed a phylogenetic analysis. They found that Austroposeidon was most closely related to a group of basal titanosaurs from South America known as the lognkosaurs (LONG-ko-sores) and fellow South American giant, Puertasaurus. The lognkosaurs and their close kin are in turn related to the African Malawisaurus and Rukwatitan.

They also found that the two titanosaurs that shared Austroposeidon's habitat were quite distantly related to both Austroposiedon and each other. Brasilotitan was found to be a saltasaurid closely related to the South American taxa Saltasaurus and Uberabatitan and somewhat close to North American Alamosaurus and Asian Opisthocoelocaudia. Gondwanatitan was found to be an aeolosaurid most closely related to various species of Aeolosaurus.


Related Stories
Father and son team discover a dinosaur tooth in Japan
Remember the Alamosaurus: America's armored dinosaur titan
Murusraptor, a megaraptoran theropod from the Late Cretaceous of Patagonia
Brazilian dinosaur was king of the abelisaurs
Were dinosaurs cold-blooded or warm-blooded? Actually, neither.
//sulc.us/7hjaw
/articles/brazil-s-biggest-dinosaur-gets-a-name/