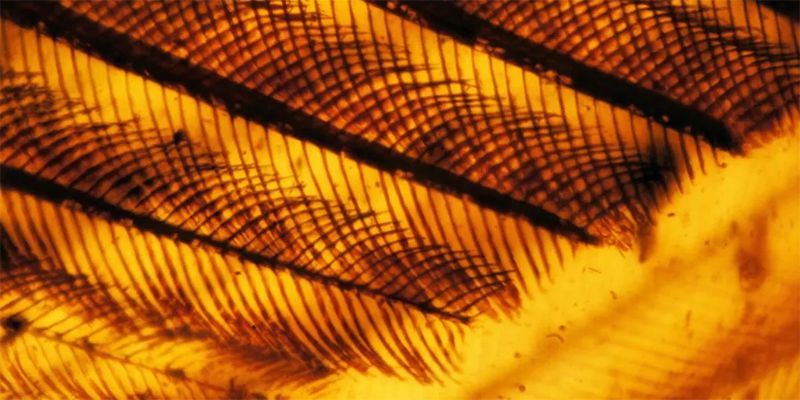 All Posts
In one small corner of Burma, scientists have discovered something incredible: The whole wings of two tiny birds preserved in amber. These fossils give us another important glimpse into Cretaceous forest ecosystems.

Feathers are a rarity in the fossil record, and three-dimensional feathers are even rarer. Yet for the first time ever, researchers working in Myanmar have discovered a three-dimensional fossil of two bird wings and attached feathers preserved in amber. The study was led by Lida Xing of the China University of Geosciences and was published in the June 28 edition of the scientific journal Nature Communications. The specimen consists of not just the feathers of an extinct bird but also the muscular and skeletal structure of the creature’s arm plus the bird’s clawed hands.

Team member and coauthor Ryan C. McKellar of Canada's Royal Saskatchewan Museum had once described bird and dinosaur feathers in Canadian amber, but they pale in comparison to the Burmese find. The Canadian find was not an articulated specimen, with the feathers being an isolated element. They were not attached to the animal's body.

The impressive level of preservation in the Burmese amber means that Xing’s team could tell that the animal had asymmetrical feathers for powered flight. Yet the small size and poor development of the flight feathers suggested that the birds were just hatchlings when they died. They also belonged to a large group of extinct, primitive birds called the enantiornithines. This was an abundant and diverse group unique to the dinosaur age, spanning the entirety of the Cretaceous, with fossil finds as far apart as Spain, China and North America. 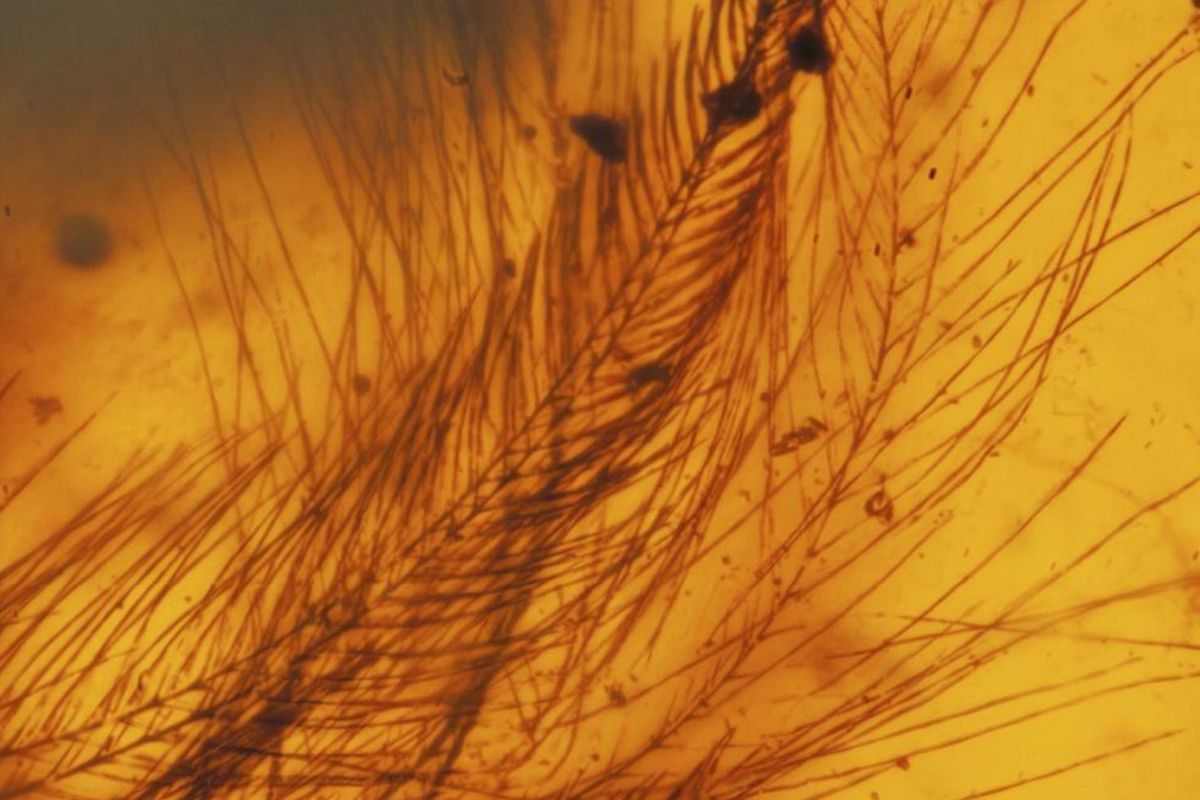 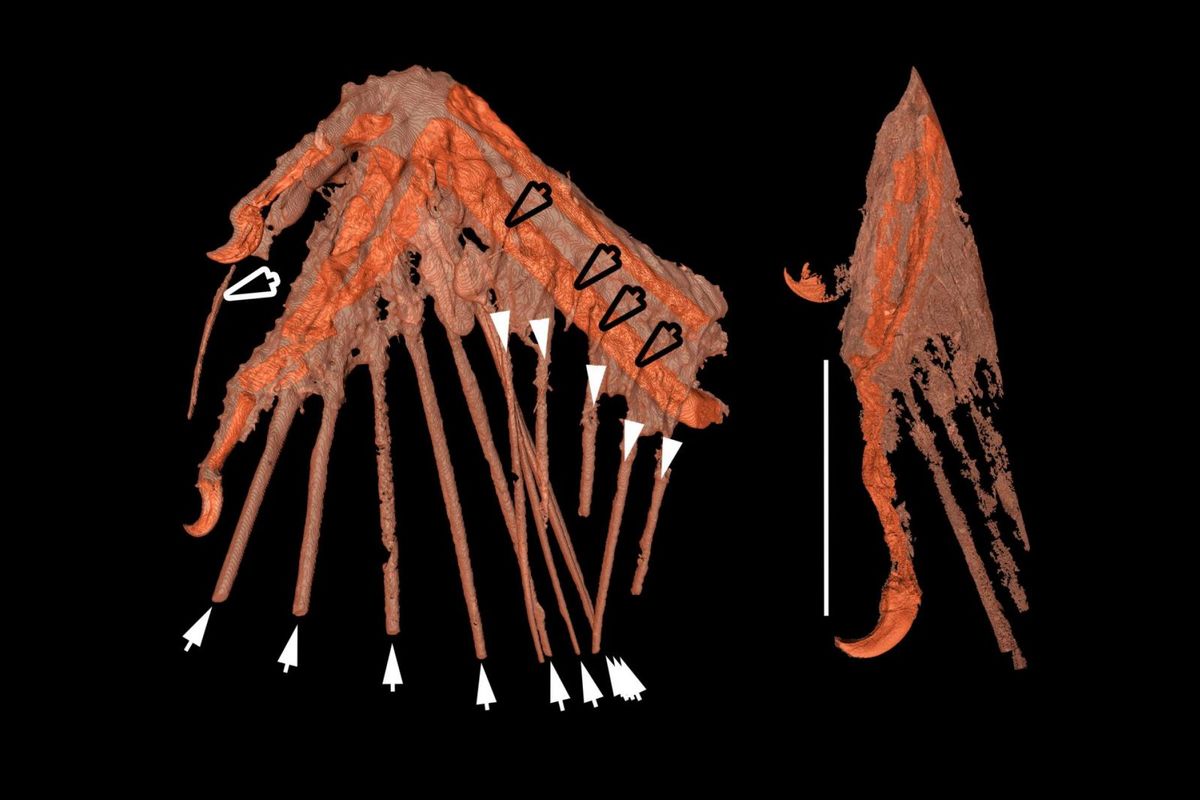 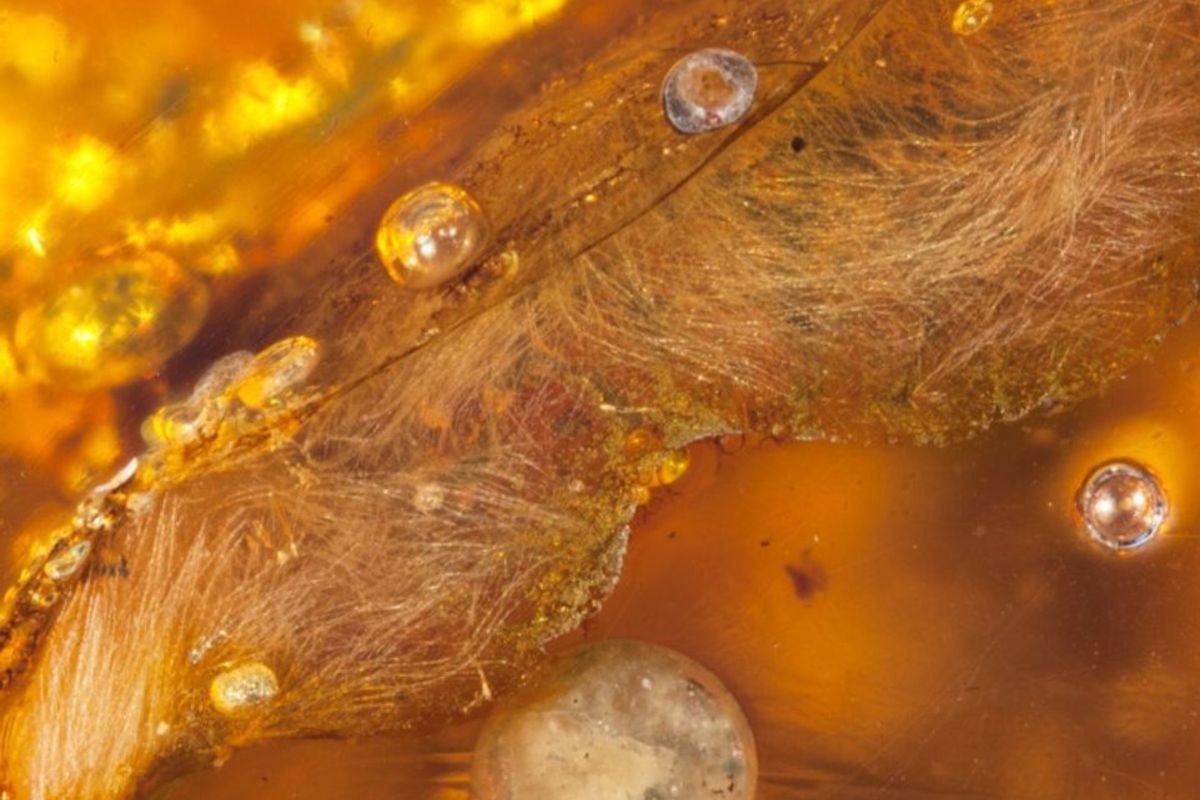 Close-up of skin flap with feathers
A skin flap from one of the specimens, containing a dense mat of soft feathers.
Xing, McKellar, et al (Nature Communications, 2016)

Enantiornithine birds still had clawed fingers. The majority of them lacked beaks and thus had teeth in their jaws. They also mostly lacked the pygostyle or firm tail feathers of modern birds, instead having shortened or strap-like tail feathers akin to birds of paradise. Studies of the wings also suggest that the Burmese enantiornithines were precocial, meaning that the chicks were very well developed after birth. Analysis of related birds and their eggs reveal that enantiornithine chicks could fly just a few days after hatching. Parental care must have been minimal and possibly even non-existent.

Enantiornithine flight was just as efficient as that of modern birds, despite having a different shoulder anatomy altogether. So while the exact species of the new specimens is hard to discern, it is possible to reconstruct the chicks’ lifestyle with confidence. Xing and team even reconstructed their feather color in life. While the feathers look black to a casual observer, close inspection under micro-CT scans reveal shades of dark brown and silver.

Amber has revealed a great many secrets to researchers. Earlier finds from this region include mating insects, the "private parts" of extinct spiders, and even countless species of extinct lizards with their skin and muscles still preserved. It is perhaps the most varied collection of life from a Cretaceous forests.

While this find is so precious to scientists, amber of this nature is also highly prized by consumers and dealers. Preservation of wings or other animal remains attracts more buyers, and the market often demands such specimens. The Hukawng Valley area is often mined and the trade of amber is not regulated, thus making such incredible finds harder to come by.

The smaller of the two specimens had been nicknamed 'Angel" by a local jeweler who had hoped to make a pendant out of the find. Polishing on the surface of one of the amber pieces indicates that it may have been separated from a larger specimen that may have included the entire bird hatchling. Only time will tell whether the public will be introduced to a new dinosaur age bird specimen. Or the amber dealers may have discarded the bird's body as impure and unattractive for the jewelry trade. We can only hope for the best.