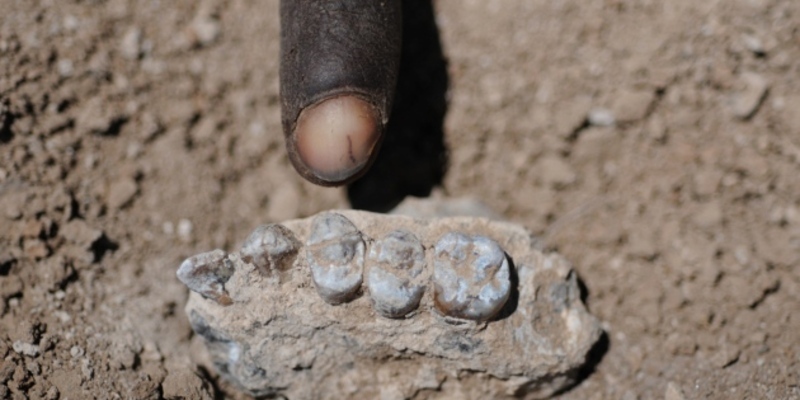 over 5 years ago by Paige Madison

All Posts
New fossils from the Afar region of Ethiopia, named Australopithecus deyiremeda, suggest that Lucy’s species lived at the same time and place as at least one other hominin species. A team led by Yohannes Haile-Selassie discovered the 3.4 million year old jaw fragments less than 23 miles from sites where Au. afarensis fossils have been found.

For decades, scientists have been uncovering evidence suggesting the Ethiopian desert was home to the hominin species Australopithecus afarensis. Au. afarensis, including the iconic fossil Lucy, lived in East Africa between 3 and 3.7 million years ago. New fossil discoveries from the Woranso–Mille in the Afar region of Ethiopia suggest that Lucy’s species had neighbors; Au. afarensis was living at essentially the same time and place as at least one other hominin species.

The new fossils, discovered by a team led by Yohannes Haile-Selassie of the Cleveland Museum of Natural History, include fragments of two lower jaws, part of an upper jaw, and a few teeth. The find is especially interesting because it occurred in close proximity to sites where Au. afarensis fossils have been discovered. For example, the well-known Hadar site, which has yielded multiple Au. afarensis individuals, is a mere 35 kilometers away.

In fact, this close proximity originally led the scientists to assume the Woranso–Mille fossils belonged to Au. afarensis. However, a closer look at the fossils revealed that the jaws have distinctive features from Au. afarensis and other known hominin species.

Haile-Selassie’s team argue that the fossils, which date back to approximately 3.4 million years ago, are similar to other Australopithecines like Lucy in some ways, but differ in others. They named the fossils a new group, Australopithecus deyiremeda, a name that in the Afar language combines the word deyi, meaning close, with remeda, meaning relative.

The Au. deyiremeda jaws are more robust, or thicker, than Au. afarensis, while the teeth are smaller. The overall shape of the jaws and teeth distinguish Au. deyiremeda not only for Au. afarensis, but also from other potentially closely related hominin species such as Kenyanthropus platyops.

Au. deyiremeda adds to growing evidence that multiple hominin species existed in Middle Pliocene in Africa. While fossils in nearby Chad and Kenya have previously raised questions of co-existing hominins, Au. deyiremeda is a particularly interesting case because it means that not only did some species co-exist, they were very close neighbors.

The differences between Au. deyiremeda’s jaw and the jaws of those of groups such as Au. afarensis raise the question, what do the differences mean? In this case, the jaw characteristics suggest different positions of chewing muscles. A shift in chewing muscles, combined with differences in tooth size and shape, suggests Au. deyiremeda had a different diet and feeding habits from Au. afarensis. This could potentially explain how two species could live side by side; they may have been after different food sources.

Au. deyiremeda brings the count of hominin species co-existing in the Middle Pleistocene to four. If four species of hominins were all competing at the same time, the question becomes: which one gave rise to the genus Homo? Scientists agree this question is far from answered. With each new hominin species discovery, the picture of human evolution becomes more complicated, and tracing evolutionary relationships becomes increasingly difficult.

The original research paper was published in Nature.