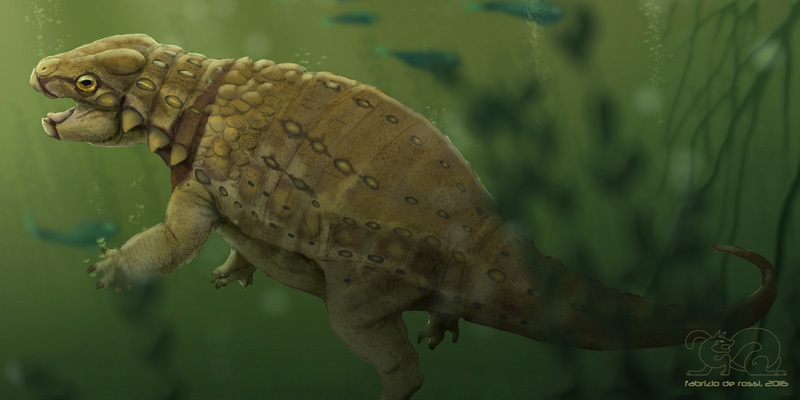 Armored dinosaur was a fish-eating turtle-mimic

All Posts
All known ankylosaurs, like Edmontonia and Euoplocephalus, were all large, heavily armored, and solely plant eaters. At least that was the case before the discovery of new specimens of Liaoningosaurus.

When the armored dinosaur Liaoningosaurus paradoxus was first described in 2001, it didn’t make much of a splash in the popular or paleontological press. The original specimen represented a very small animal, only about 34 cm in total length. That specimen preserved some unusual features for an ankylosaur, including two very large plates of bone covering nearly the entire belly, and very few spikes or other bits of bony armor on the back. This is unlike most ankylosaurs which generally have extensive coverings of osteoderms (the bony cores of spikes, plates, and scale-like scutes that grow within the skin) on their backs and sides. The overall small size of the specimen and the lack of fusion between parts of the vertebrae led most paleontologists to regard the specimen as an indeterminate juvenile.

In August of 2016 however, a new specimen of Liaoningosaurus was described, also from the Lower Cretaceous Yixian Formation in Liaoning Province, northeastern China. Like the original specimen, this new specimen was extremely small, lacked fusion within vertebrae or the sacrum, and seemed to lack dorsal scutes.

Incredibly, this specimen appears to preserve evidence that Liaoningosaurus ate fish.  Preserved within the ribcage are incomplete portions of fish skeletons. The authors consider it unlikely that the ankylosaur died on top of the fish carcasses and they ended up within the ribcage and there are no other fish skeletons found near the specimen. Additionally, they find it unlikely that the fish died within the skeleton while scavenging as there does not appear to be any indication that the skeleton was scavenged before burial. In fact, the fragmentary and incomplete nature of the fish skeletons seem to point toward their being gut contents. 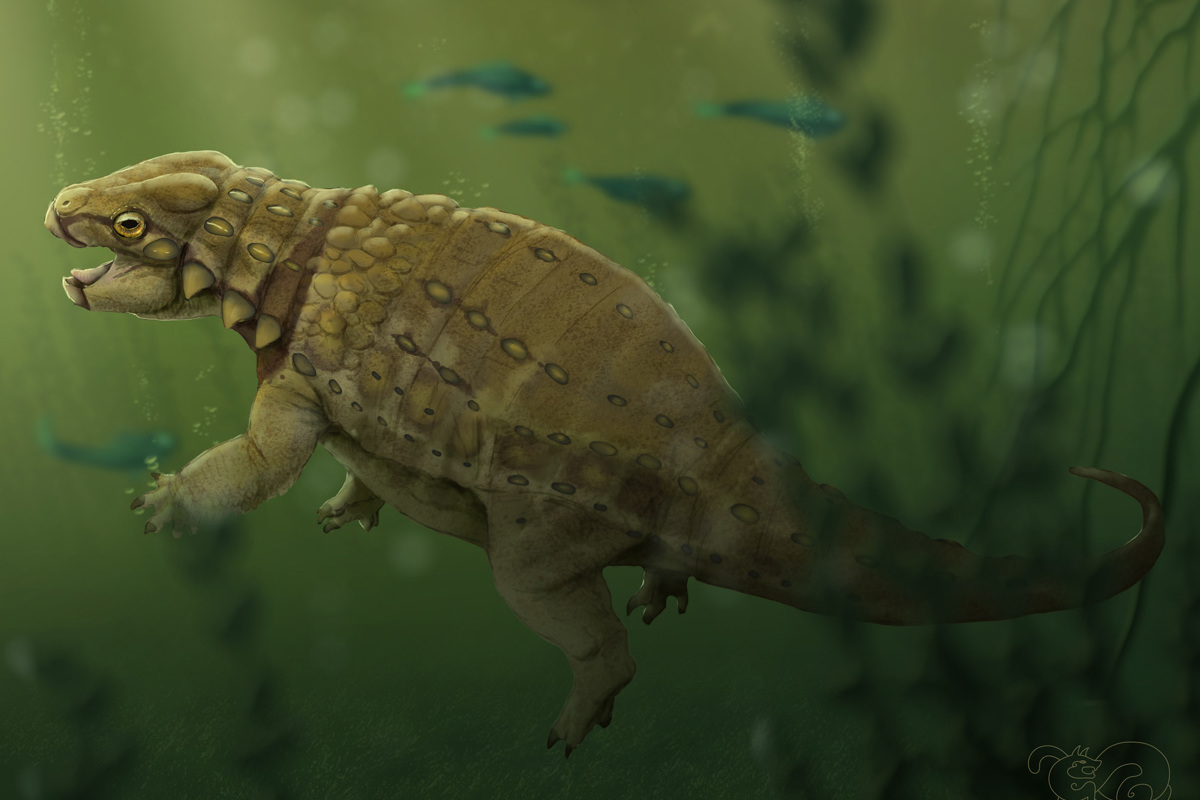 This is supported by the tooth morphology seen in Liaoningosaurus. Ankylosaur teeth are roughly triangular or leaf-shaped and have many individual points, known as denticles. Liaoningosaurus’s teeth are superficially like those of typical anylosaurs, except that the gaps between the denticles extend almost all the way to the base of the tooth, making the entire tooth look something like a comb or a fork with six or seven sharp tines. The authors consider this to be evidence that the teeth are adapted toward a carnivorous lifestyle.

What’s more, even though only two specimens of Liaoningosaurus have been figured in the technical literature, there are apparently hundreds of specimens collected from the Yixian Formation. All of the specimens are under 50 cm in length and appear to lack vertebral or sacral fusion, but have belly-covering osteoderms. Although the small size and lack of fusion would normally indicate that these are juvenile specimens, authors regard the sheer number of similarly sized specimens as suggesting that they were in fact adults, and the lack of vertebral fusion and armored bellies indicating that they were aquatic or semi-aquatic in nature. Many marine reptiles did not fully fuse their vertebrae or sacra, and the belly armoring is highly reminiscent of turtles.

This is the first, and so far only known example of a possibly carnivorous or omnivorous ornithischian, a large group that includes not just ankylosaurs, but stegosaurs, pachycephalosaurs, ceratopsians, and ornithopods as well. Although what the authors have presented appears to be compelling, further research is needed to demonstrate that Liaoningosaurus was indeed feeding on fish, and that it was a tiny semi-aquatic turtle-mimic.