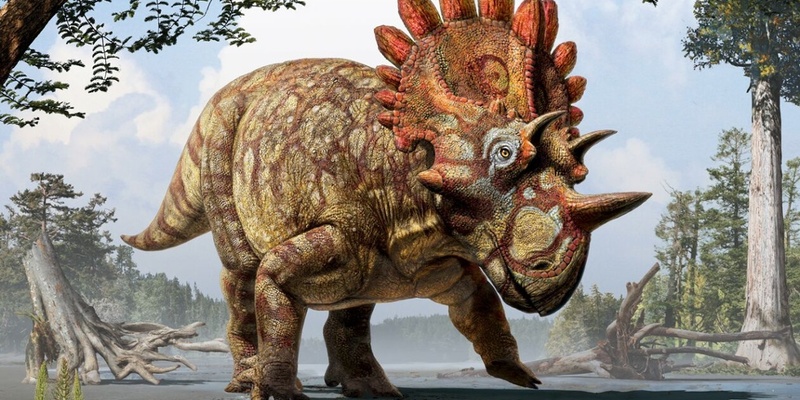 over 5 years ago by Pete Buchholz

All Posts
Named in 2015, Regaliceratops, meaning royal horned face, has numerous spade shaped horns on its frill, resembling a crown.

In 2015 paleontologists Caleb Brown and Donald Henderson described a newly discovered species of ceratopsid, or horned dinosaur, from the upper St. Mary River Formation of Alberta, Canada, in rocks around 68 million years old. The new species, Regaliceratops peterhewsi, is based on a single well-preserved skull that is unlike any other horned dinosaur.

The nose and brow horns are all about the same length and the frill's outer edge is decorated by at least 15 small spade-shaped horns. The horns on the short frill reminded Brown and Henderson of the points on a crown, which inspired the name Regaliceratops, “royal horned face.” The specimen was given the name 'Hellboy' by the team that excavated it because the short brow horns reminded them of the comic book character.

The large horned dinosaur family, Ceratopsidae, lived almost entirely in western North America during the Late Cretaceous Period. The family is made up of more than 40 known species of four-legged herbivores with parrot-like beaks, nose and brow horns, and frills extending from the back of the skull over the neck.

Regaliceratops has features found in both centrosaurs and chasmosaurs. So, Brown and Henderson performed a phylogenetic analysis to determine where Regaliceratops belonged on the ceratopsid family tree. They found that it was a chasmosaur very close to the lineage that includes Triceratops, but it evolved several features that were reminiscent of the extinct centrosaurs, like short brow horns, and a shortened frill.

No other late-living chasmosaur had short brow horns and a short frill, but they were almost always found in centrosaurs. Brown and Henderson point out that this is an example of convergent evolution within the horned dinosaurs, where two lineages evolve similar features independently.