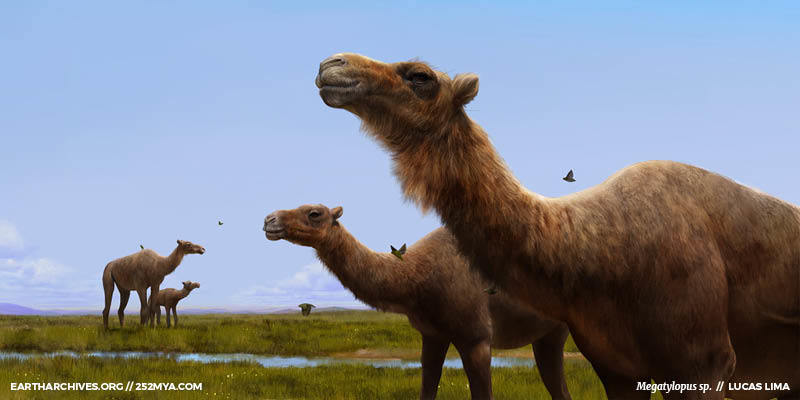 about 5 years ago by Jackson Chambers

All Posts
An ancient fourteen-foot tall camel was excavated by paleontologists at the University of Louisiana. This specimen is the most complete giant camel fossil to date.

Researchers at the University of Louisiana in Lafayette excavated a giant camel found in Oregon back in 2015. The specimen is the most complete fossil of Megatylopus, an extinct large camel that lived from the Late Pliocene to Early Pleistocene (13.6-1.8 million years ago). This particular specimen is thought to be around 7 million years old and 4 meters (14 feet) tall. A study done by Mendoza and his team estimate Megatylopus camels to weigh around 1698 kg (3700 lbs).

The fossil took two months to excavate. It was then encased in plaster and shipped back to Lafayette where a replica was prepared and showcased at the Prehistoric Giants exhibit at the Lafayette Science Museum back in April 2016.

This fossil is very important to paleontologists as it is the most complete Megatylopus fossil ever found. It can give us information about how Megatylopus lived as well as the evolution of camelids.

In addition to this fossil found in Oregon, Megatylopus fossils have also been found in Arizona, California, Colorado, Kansas, Nebraska, Nevada, New Mexico, Oklahoma, Tennessee, and Texas, as well as rare individuals in Canada and Mexico.