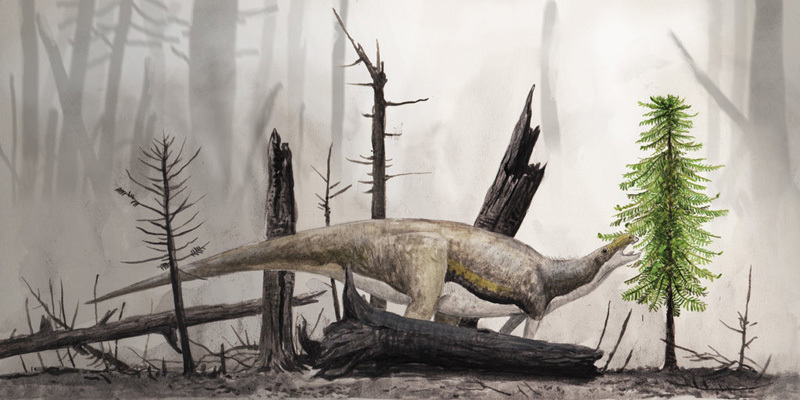 All Posts
A rare and endangered conifer from Australia, first discovered in 1994, has a lineage stretching back to the time of dinosaurs.

In September of 1994, a national park field officer named David Noble was hiking in wild and nearly inaccessible region of Wollemi National Park in New South Wales, Australia, not far from Sydney. He came upon an evergreen tree that he didn't recognize, and collected some specimens hoping to identify it when he got back home. Much to his surprise, Noble had found a species completely unknown to science. This new species was given the scientific name Wollemia nobilis, named for the national park and for Noble himself, and is commonly known as the Wollemi Pine.

Wollemi Pines are evergreen conifers. They usually have a single trunk with bumpy gravelly bark and can grow up to 40 meters tall. Although Wollemi Pines are conifers, their leaves are less needle-like than most common conifers, instead being fairly flat, 30-80 mm long and as wide as 5 mm. They're spirally arranged on the stems, but in such a manner that it looks as though there are two stacked layers of leaves on the left and right sides of the stems. Like many conifers, the pollen producing male cones grow at the tips of branches. The larger, spiny, seed-bearing female cones also grow at the tips of branches.

Wollemi Pines are not true pines of the botanical family Pinaceae, but instead members of the family Araucariaceae. Araucariaceae are distributed across the southern hemisphere with a large number of species in Australia, New Zealand, Indonesia, and the South Pacific islands, although fossils show they had a wider distribution in the past. Other living araucarians may be familiar to readers as Monkey Puzzle Trees, Norfolk Island Pines (genus Araucaria), and various Kauri species (genus Agathis). Fossils of the nearest relative of Wollemia, the extinct tree Wairarapaia, are found in Lower Cretaceous rocks from New Zealand, indicating that Wollemia-like trees have been living on southern continents for more more than 100 million years. 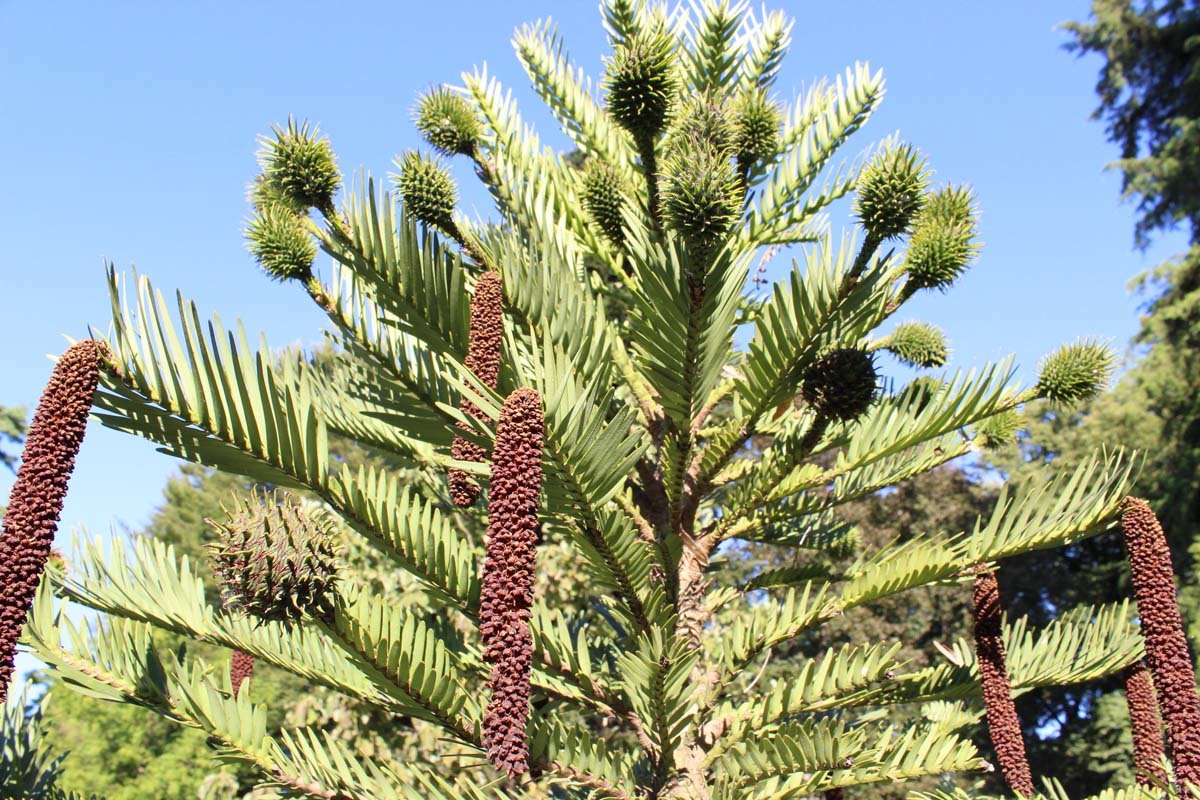 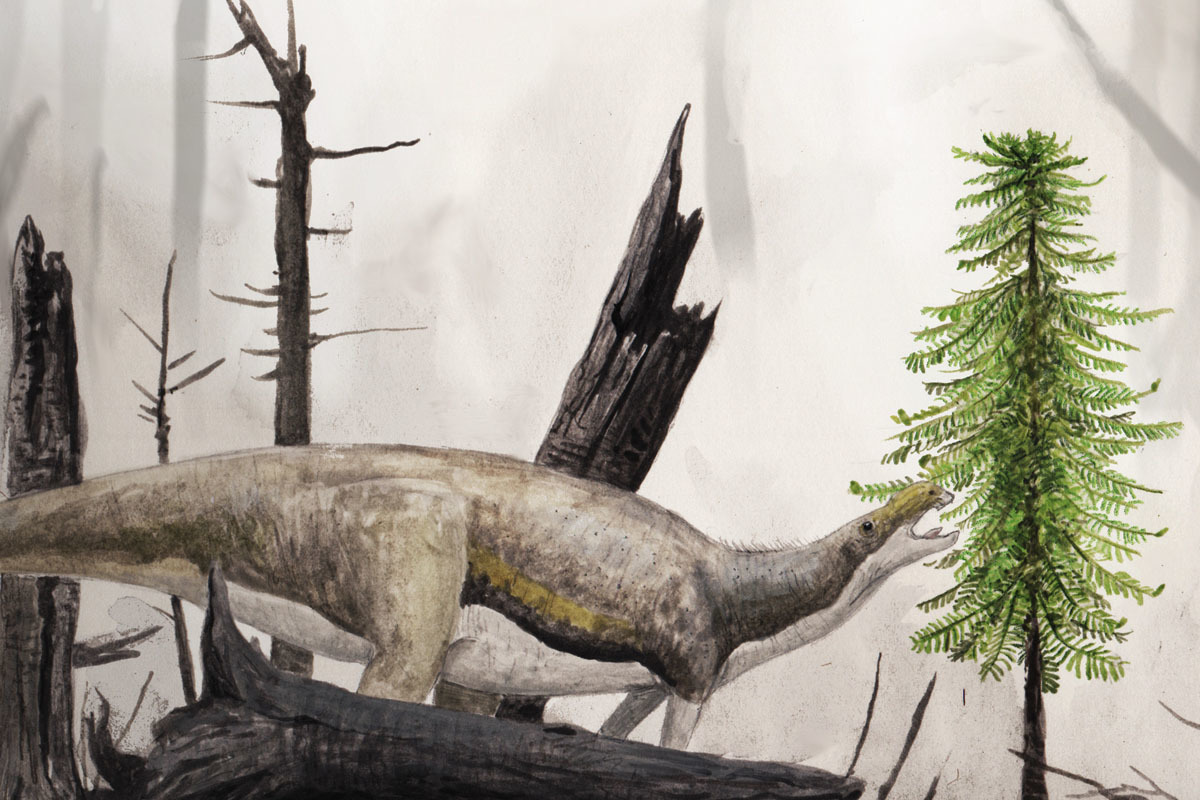 Wollemi Pine and a Muttaburrasaurus
A reconstruction of Wollemia in its Mesozoic environment.
Joschua Knüppe

Fossils attributed to Wollemia are found in rocks all over Australia, but seem to have disappeared from the fossil record about two million years ago. Today, Wollemi Pines are limited to three small areas in Wollemi National Park and number fewer than 100 wild trees. Because of their rarity in the wild, they are protected in Australia and are listed by the IUCN as critically endangered. The protections are so strict that the exact locations of the living trees are kept a secret and are only accessible to scientists. This is done for two reasons: first, to prevent poaching of specimens, and second, to prevent humans from spreading botanical diseases to the endangered trees.

In addition to protecting the wild trees, there is a program that provides living Wollemi Pines to botanical gardens. Today, many trees live all over Australia, as well as botanical gardens around the world. Although the wild trees live in a humid subtropical forest, they're capable of surviving a wide range of temperature from -5 to 45 Celsius, and can deal with full sun or shade.


Related Stories
Carrying the world: the environmental burden on a snail’s shoulder
Save the sea squirts! Wait, what?
Desert hummingird on the edge of extinction
Ancient marine reptiles inhabited the icy waters of the north
Dolichorhynchops, the weird marine reptile with sharp pointy teeth
//sulc.us/r7c9x
/articles/wollemi-pine-cretaceous-survivor-of-australia/