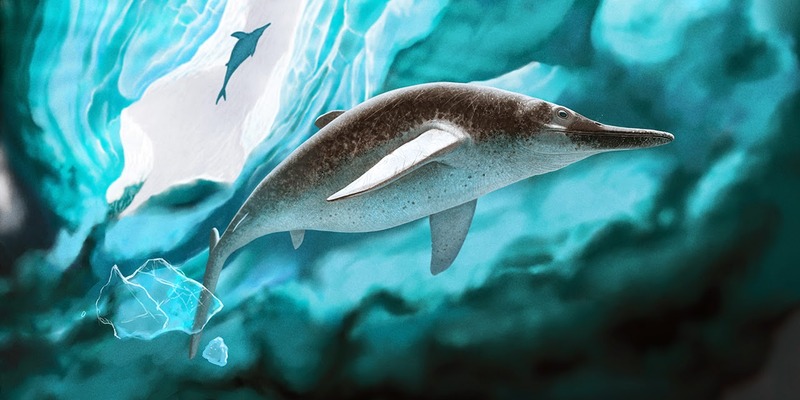 Ancient marine reptiles inhabited the icy waters of the north

All Posts
New ichthyosaur fossil discoveries in Arctic Russia indicate that these marine reptiles were adapted to life in icy polar regions.

A team of paleontologists from Russia and Germany has found more evidence that ichthyosaurs during the Mesozoic Era inhabited cold water in the northern latitudes. Ichthyosaurs were a group of marine reptiles superficially resembling dolphins that plied the seas in great numbers during the Jurassic and Cretaceous periods of geologic time.

Fossil remains of two individuals were studied in this research. The first, an ichthyosaur called Arthropterygius, was found in a museum collection in Moscow and was collected in the 1940s on a riverbank in northern Russia. The second specimen, an Ophthalmosaurus, an ichthyosaur named after its large eyes, was collected in 2013 near the Kanin Peninsula even farther to the north.

Remains of Arthropterygius and a related group have also been found in Arctic Canada and southern Argentina, suggesting that this type of ichthyosaur had a very wide geographic distribution. Ophthalmosaurus has been found most notably in North America and Europe. Both specimens are the first ichthyosaur discoveries in their genera in Russia. The Ophthalmosaurus specimen is the most northerly for its genus.

The locations in northern Russia, northern Canada and Norway where ichthyosaurs have been found were still very much in the high latitudes during the Jurassic Period. Around 150 million years ago the supercontinent Pangaea had already rifted apart and the modern day continents were beginning to take shape. A large seaway called the Tethys Ocean divided the northern from the southern continents. Argentina was on the other side of the Tethys. Ichthyosaurs may have used the Tethys as a corridor to get from the southern continents and settle the north or vice versa.

There is not yet any evidence that ichthyosaurs had migratory patterns like modern-day marine mammals, which generally inhabit northern latitudes during that region’s summer.

Arthropterygius fossils seem to be relegated to the high latitudes (with a sister group having been found in Argentina), therefore it may have been adapted to a life in cold water. This coldwater lifestyle suggests that ichthyosaurs were endothermic, meaning these reptiles could regulate their internal body temperature just like mammals. Most living reptiles are ectothermic and must bask in the sun to regulate their body temperature.

Ichthyosaurs' ability to adapt and conquer different ocean environments including high latitudes led to their great diversity and success during the Jurassic and Cretaceous periods.

The success of the ichthyosaurs came to an end during the Cretaceous, well before an asteroid killed the dinosaurs. It’s not yet clear why.

You can find the original research paper here.