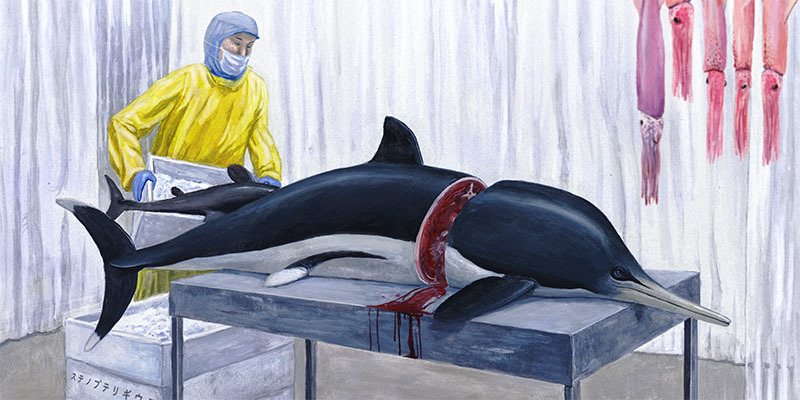 All Posts
An incredible new specimen of the Early Jurassic genus Stenopterygius found in Germany was studied by Johan Lindgren and colleagues. It preserves skin in detail not previously seen in other ichthyosaur fossils. The team of researchers have learned new details of how ichthyosaurs looked in life, as well as details of their physiology.

Ichthyosaurs are extinct dolphin-like marine reptiles found in rocks all over the world. They were completely devoted to living in the sea, with a streamlined and compact body, limbs converted to flippers, a triangular dorsal fin, and a crescent-shaped tail fin. Ichthyosaurs looked remarkably similar to both dolphins and swordfish, and were predators of fish, squid, and ammonites. They lived in the Mesozoic Era, alongside the dinosaurs, pterosaurs, and another group of marine reptiles known as the plesiosaurs.

The skin patch on an amazing new specimen of Stenopterygius is so exquisitely fossilized that skin cells can be seen. It shows that ichthyosaur skin was made up of distinct epidermal and dermal layers, together known as the cutus. There are no signs of scales, instead its skin appears to have been tough and rubbery like dolphins.

The epidermis also contains pigments and branching pigment cells. They show that Stenopterygius had a dark upper surface and light belly. This coloration is an example of countershading, and is common in many marine animals. Countershading helps camouflage animals, allowing them to blend in with deep water when seen from above and blend in with the sky when seen from below. 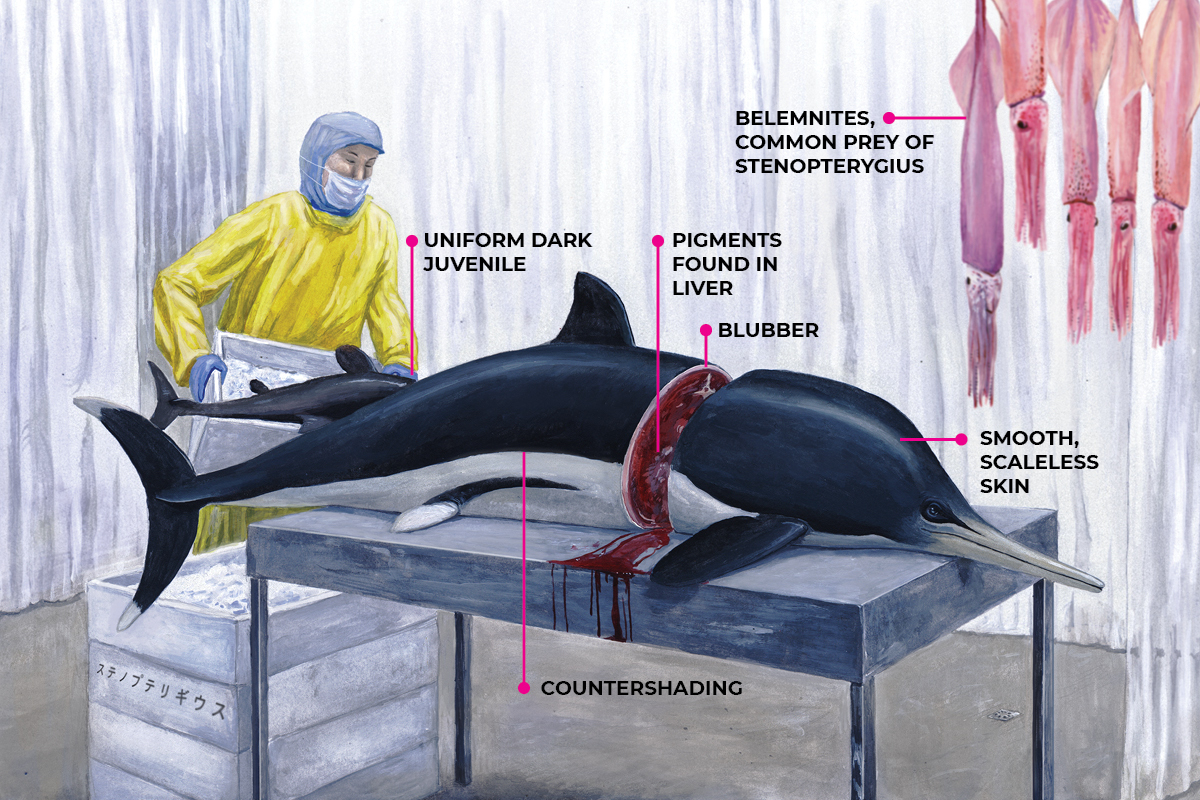 Some other, smaller Stenopterygius individuals described in previous studies also have skin pigments, but they appear to be uniformly dark in color. This species may have changed its coloration as it grew up, going from dark juveniles to countershaded adults.

Incredibly, the branching structure of the pigment cells hints that ichthyosaurs may have been able to adjust their skin tone to lighter or darker shades.

Below the cutus is a thick layer of massive and fibrous tissue that Lindgren and colleagues interpreted as blubber. The researchers conducted experiments on porpoise skin to simulate the fossilization process, and found that the porpoise’s blubber looked almost identical to what they saw in Stenopterygius.

In living animals, blubber is only found in whales, dolphins, seals, manatees, dugongs, and leatherback turtles. Blubber helps streamline the body and provides buoyancy, but it’s only found in warm-blooded animals as its primary purpose is heat retention in frigid waters.

The presence of blubber in Stenopterygius adds to a growing list of evidence showing that ichthyosaurs, like dolphins, were also warm-blooded. This list also includes fast-growing vascularized bones, and oxygen isotope ratios in bones and teeth showing that the extremities were not significantly colder than the body’s core.

Ichthyosaurs evolved from terrestrial lizard-like ancestors 250 million years ago in the Early Triassic Period. They quickly became fully aquatic and dolphin-like, and filled a similar role in the oceans of the Mesozoic. Unable to return to land to lay eggs, ichthyosaurs gave birth to live young. They died out about 90 million years ago in the middle part of the Cretaceous Period, not long after a period of ocean anoxia, or low oxygen content.

This new specimen has allowed us to know much more about ichthyosaur appearance, behavior, and physiology, further reinforcing their similarities to dolphins. Their uncanny similarities are an example of convergent evolution, where different lineages end up looking alike because of similar selective pressures. New discoveries will only add to our understanding of these incredible marine predators of the Mesozoic.