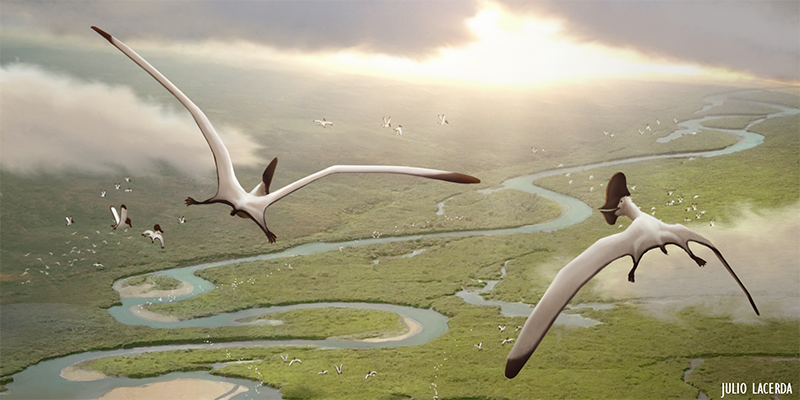 When reptiles had wings: Rise and fall of the pterosaurs

All Posts
Pterosaurs are the most iconic and arguably beautiful of all extinct animals. They have inspired awe in all who discovered their fossils and now they have come to life like never before through the Pteros project, an online encyclopedia of pterosaurs.

The story of the pterosaurs is the story of the Age of Dinosaurs as a whole. They arrived on the scene at the same time as their dinosaur neighbors around 225 million years ago. The early pterosaurs started out life as barely noticeable little animals and ended up as the most magnificent and powerful creatures ever to take to the air. For many, they are the nightmarish ‘pterodactyls’, the winged dragon-like beasts that plagued the prehistoric world. But in reality the pterosaurs were incredibly evolved, and well-adapted fliers with huge brains and the ability to cross landmasses with just a few strong flaps. By the time their era ended, they had conquered almost every conceivable niche and settled on nearly every continent. Pteros, a collaborative effort between artists, writers and enthusiasts, will bring the pterosaur to life in all its glory. From the tiniest sparrow-sized animals to aerial leviathans, Pteros covers the strangest and most impressive members of an already impressive family.

The first pterosaur fossil discoveries are about as old as the early days of paleontology themselves. None other than Baron George Cuvier, the father of comparative anatomy, was responsible for the coining of the word ‘ptero-dactyle’ for the first fossils of the eponymous Pterodactylus as far back as 1807. This marks the first time a pterosaur was discovered and described scientifically, and it caused a stir in the scientific community. Was it a bat? A bird? A marsupial? Did it use its elongated fingers for climbing? Or did it have paddles like a penguin? From the same location in Solnhofen, Germany, more fossils were uncovered and these were all contemporaries of Pterodactylus from the Late Jurassic period.

Very soon it was realized that these were flying reptiles unlike any alive today. The earliest pictures of pterosaurs were those of clumsy and awkward flappers or gliders that gave way to the far superior birds. This image would persist even after much larger individuals were discovered. During the 19th and much of the 20th Century, pterosaurs were either cast in the role of vicious monsters or just insultingly bad fliers that could barely stay aloft. 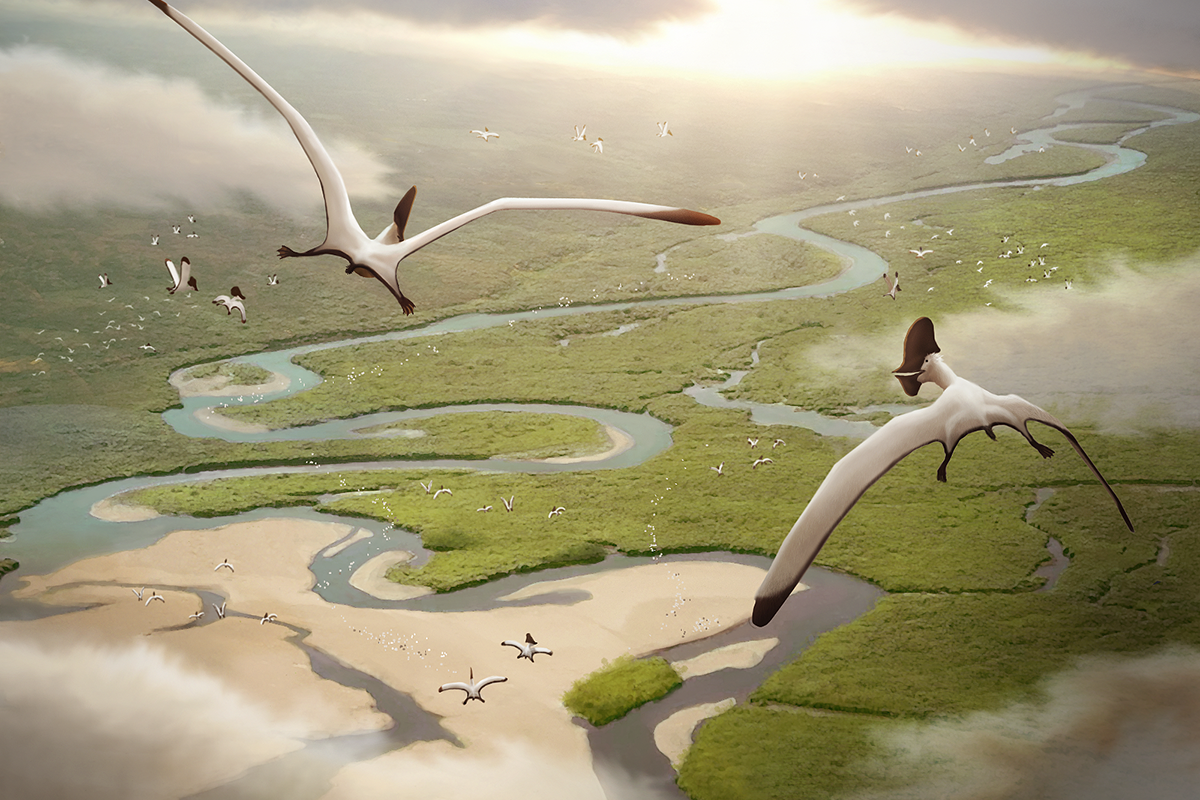 Tapejara dawn
A huge flock of Tapejara fly over the rivers of Brazil, more than 100 million years ago
Julio Lacerda 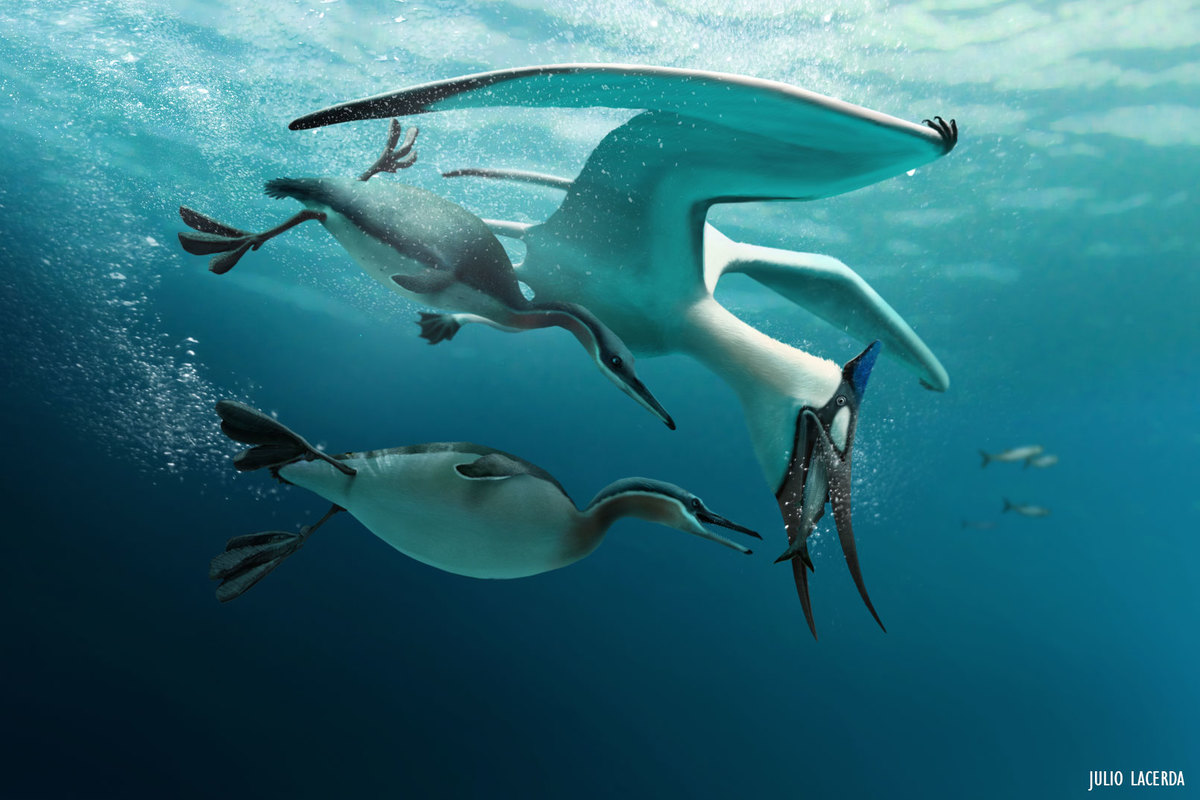 Pteros, the encyclopedia of pterosaurs, debuts Monday, February 15, 2016. It will feature 30 pterosaurs and release at least one new pterosaur per week until all 150 groups are represented.

With more research however, the extent of their abilities as aeronauts became clearer. Thanks to a very special fossil from Kazakhstan we realized that pterosaurs were actually warm-blooded animals. It dates back to the Late Jurassic, and is called Sordes. Sordes was a small pterosaur, but what made its remains especially unique was the discovery of furry filaments lining its body. These fur-like filaments are now called pycnofibers. Almost every inch of a pterosaur’s body was covered in pycnofibers. We even have fossils of pterosaurs with partially furry wings. Of course, being flying animals, this indicated a high-energy lifestyle and a particularly high metabolism. Pterosaurs probably consumed huge amounts of food to sustain themselves. Thanks to Sordes and other recent findings, we can officially kill even more myths about these wonderful creatures.

For one, the pterosaurs never surrendered the skies to the birds. Bird evolution went into overdrive during the Early Cretaceous, roughly 125 million years ago. Pterosaurs and birds flourished together in relative harmony in the same ecosystems and neither showed signs of dying out or outcompeting the other. Instead, at this time both groups were at their peak, with a diversity never seen before.

Sites in Eastern China and Brazil show us that a myriad of bizarre forms existed all at once. Some were fishermen with long, albatross-like wings and narrow jaws for snapping up their slippery prey. Some were filter-feeders with bristle-like teeth for snaring tiny planktonic prey. There were those that flitted through the forests on tiny wings like fuzzy reptilian butterflies. Others walked on land, stalking small animals or cracking fruits and nuts with their short beaks. Many sported bizarre crests on their heads. Thanks to extensive research we know that many pterosaurs showed marked dimorphism. That is, there were differences between the sexes. Males were often twice as big as the females and they used their crests for display purposes. Still as the Early Cretaceous drew to a close there were no signs of them dying away and they went from strength to strength.

But then something happened, an extinction event that occurred roughly 90 million years ago. This put a serious dent in both pterosaur and bird populations. It was the former that were hit the hardest. Increased volcanism had created a greenhouse effect, the Cretaceous Thermal Maximum that transformed the cool Early Cretaceous climate into a hot and humid one. Only the terrestrial carnivores and a few marine pterosaurs managed to survive but even then they showed no real signs of waning away. Rather, they grew into immense winged goliaths that towered over their prey. These new aerial giants even managed to dominate lands where dinosaurs were not as prominent as expected.

The largest flying animal of all time lived very near the end of the Dinosaur Age. This giant called Quetzalcoatlus was as tall as a giraffe on all fours, and its wings spanned over 10 meters, as much as a small aircraft. It probably weighed close to 250 kilograms or more. Quetzalcoatlus shared North America with the terrifying likes of Tyrannosaurus, playing second to the dinosaur on the food chain. Pterosaurs like this were the pinnacle of their evolution. It was once thought that the very biggest Quetzalcoatlus were unable to fly or had to make us of rising air thermals to even stay aloft. New research suggests that pterosaur torsos were packed to the brim with dense muscle. They launched via a push-up motion, using just their arms, and from there onward used a method known as dynamic soaring. The biggest pterosaurs could stay in the air with just a few flaps of their wings. An animal like Quetzalcoatlus could probably travel for 16,000 kilometers non-stop, relying on just a few flaps to stay airborne and then soaring the rest of the way.

All of this is a testament to their glory and their success. It was only a celestial event that could wipe out Quetzalcoatlus and its kin. In this case, it was the infamous asteroid that crashed into the Earth 66 million years ago, the one that heralded the end of the Age of the Dinosaurs, The pterosaurs and their neighbors, as well as numerous other creatures were gone for good, but their legacy still remained. Paleontology has been evolving at a breakneck speed since its origins in the 18th Century. We know more about pterosaurs and their lifestyle than we could have ever hoped to, and there is still more to be discovered.

Pteros debuts Monday, February 15, 2016. You can get notified when the site launches or vote for which pterosaurs get released next by visiting the website: PTEROS