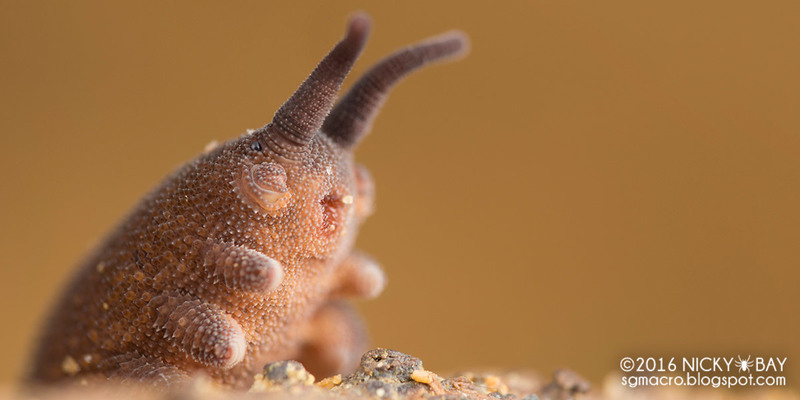 Velvet worms, the voracious snipers of the undergrowth

All Posts
While we can try to convince you that these are not in fact plush toy centipedes, velvet worms certainly look like them. These small invertebrates are neither insects nor worms, and for a long time were considered the ‘missing link’ between them. Even with the knowledge that this is not the case, velvet worms are still remarkable creatures, and unusual in almost every way.

Even though they live in warm regions, velvet worms prefer cooler temperatures, coming out at night to clamber over the moist undergrowth. As velvet worms live in such humid environments, their bodies are hydrophobic. The small lumps covering their bodies are covered in scales that repel water, saving them from the risk of excess water intake.

Long and tubular, the velvet worm’s segmented body is covered in dimples known as papillae, resulting in their common name. They come in a variety of colours, including orange, red, brown, blue, gold, and white. Occasionally species will have multiple colors in striped or blotched patterning.

They can have 13-43 pairs of legs, which have no joints. The legs move thanks to different pressures of fluids in the legs contracting or relaxing the limbs. Each leg ends in a small pair of retractable claws. 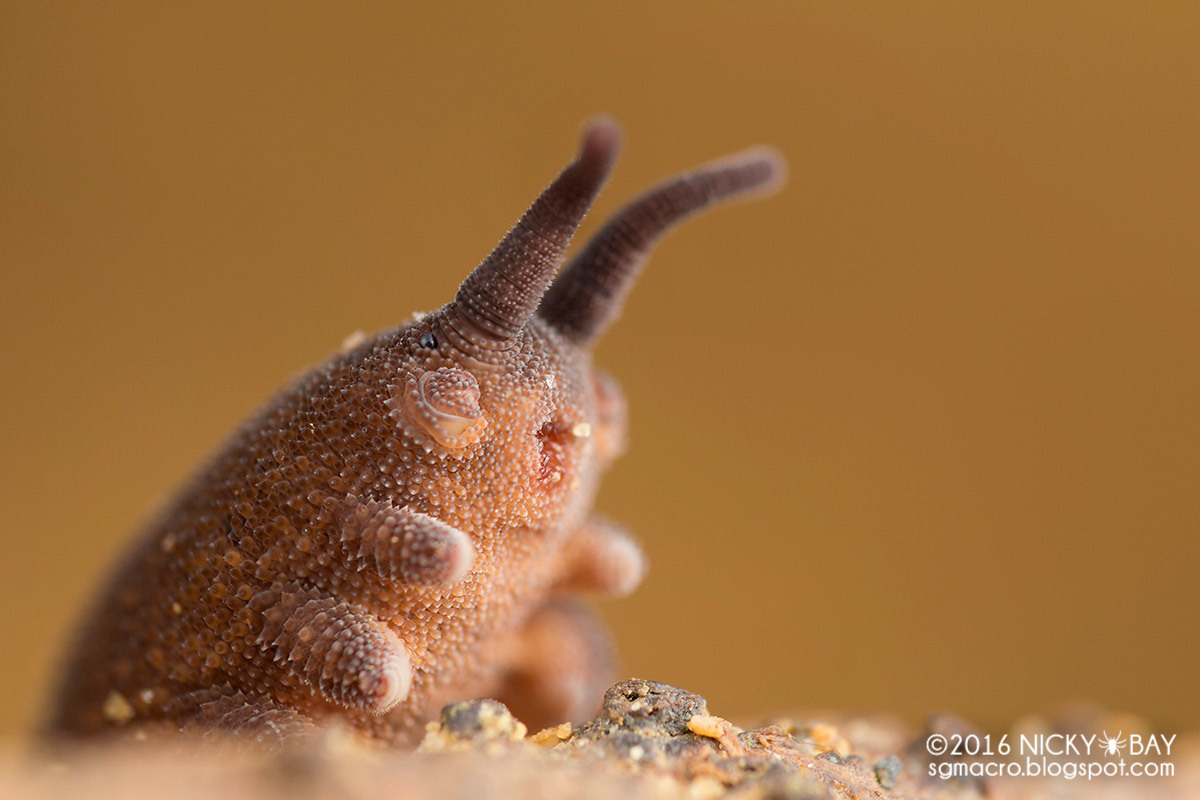 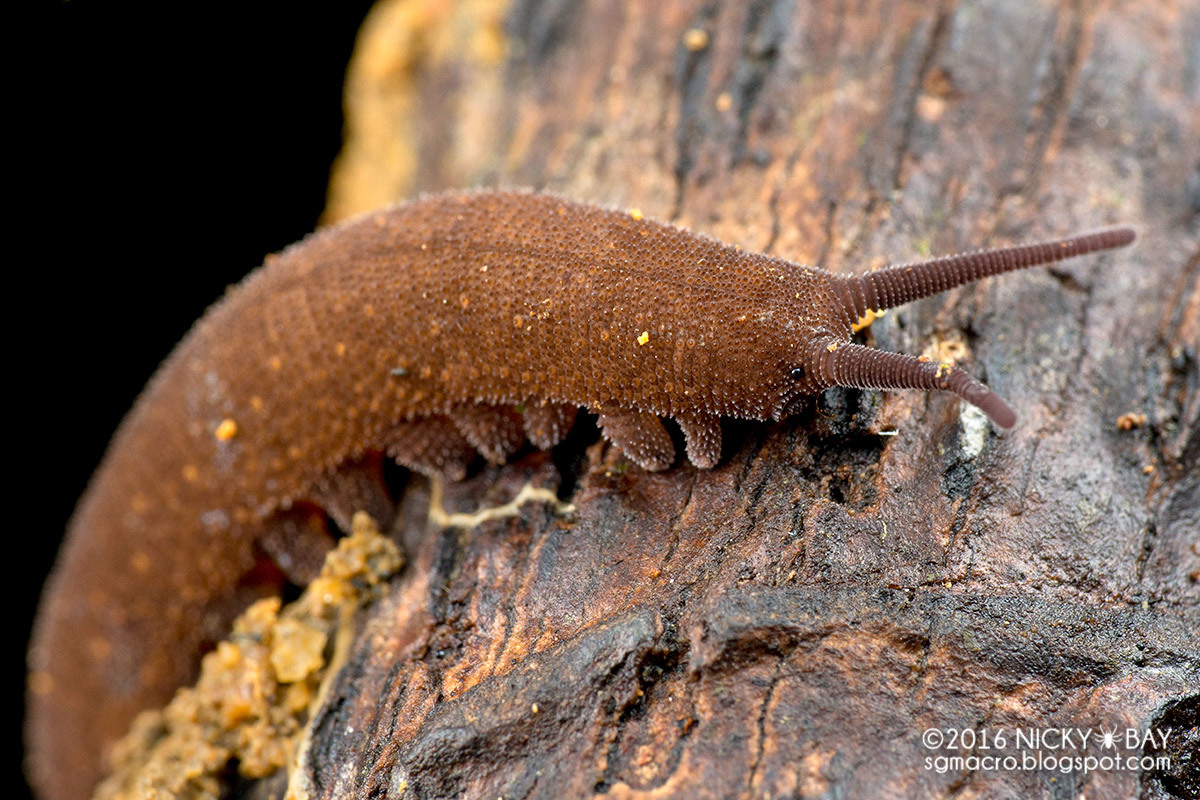 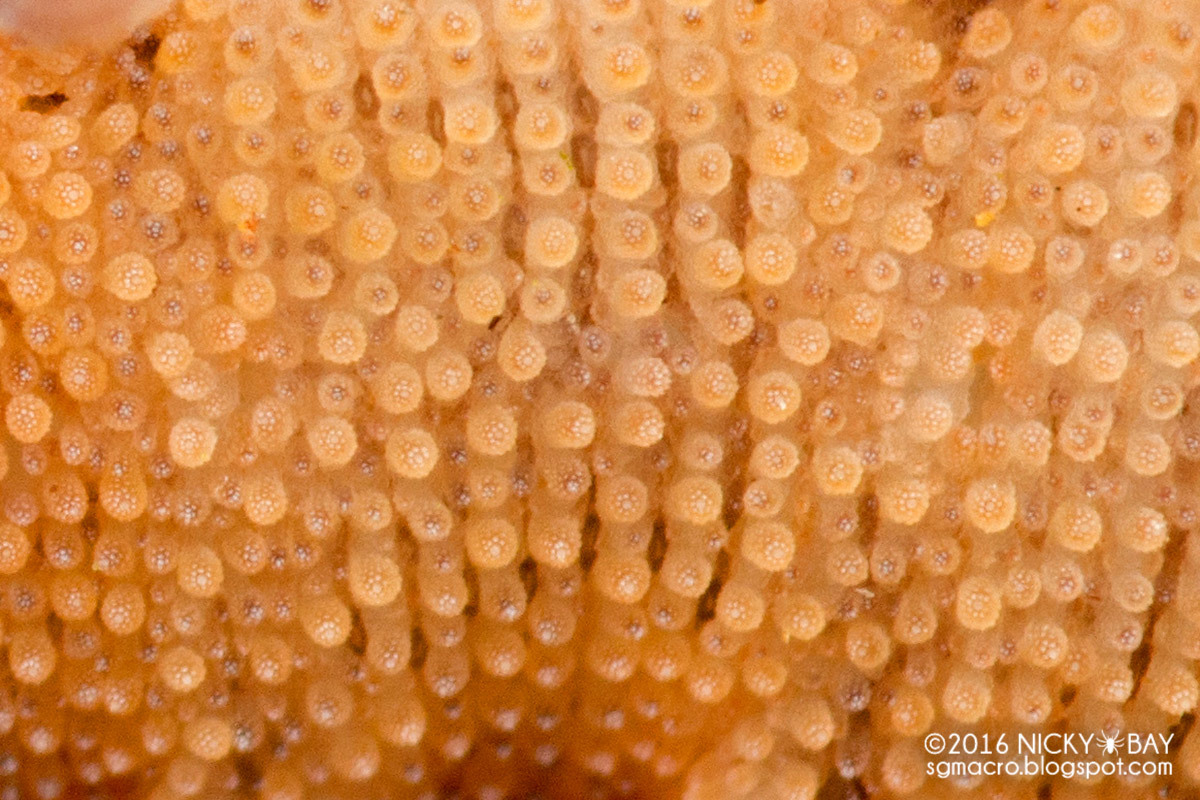 As seen in these photographs provided by Nicky Bay, the velvet worm's head features a pair of thick antennae, one pair of beady eyes, and a mouth containing sharp mandibles, which look almost identical to the claws on their feet. Velvet worms can reach 20 cm (8 in) in length, but most species only reach 5 cm (2 in).

Females are usually larger than males and typically only produce young once in their lives. They vary in how they mate and how young are born; some velvet worms lay eggs, and others produce live young, but the majority undergo a process known as ovoviviparity. In this process, embryos develop inside an egg, but the egg is kept inside the mother’s body until the young are ready to hatch.

It would be easy to assume that these small creatures are some kind of centipede or a caterpillar that was a bit too stubborn about not wanting to grow up, but velvet worms are in fact neither of these. Velvet worms are part of a group known as onyhophora (“bearing claws”), containing about 200 species of them. Their closest relatives are tardigrades; you’re more likely to know them as water bears, the ‘indestructible’ animals that can survive in the vacuum of space.

Velvet worms are divided into two living families, separated by genetics and geography. The first family, Peripatidae, are longer than the other family, with more legs and mostly producing young through live birth. They are found in tropical regions, such as Central and South America, some Carribean islands, West Africa, and Malaysia. The second family is called Peripatopsidae, which is considered the more ‘primitive’ family. They are found mostly on islands in Oceania, with small populations also found in South Africa and Chile. 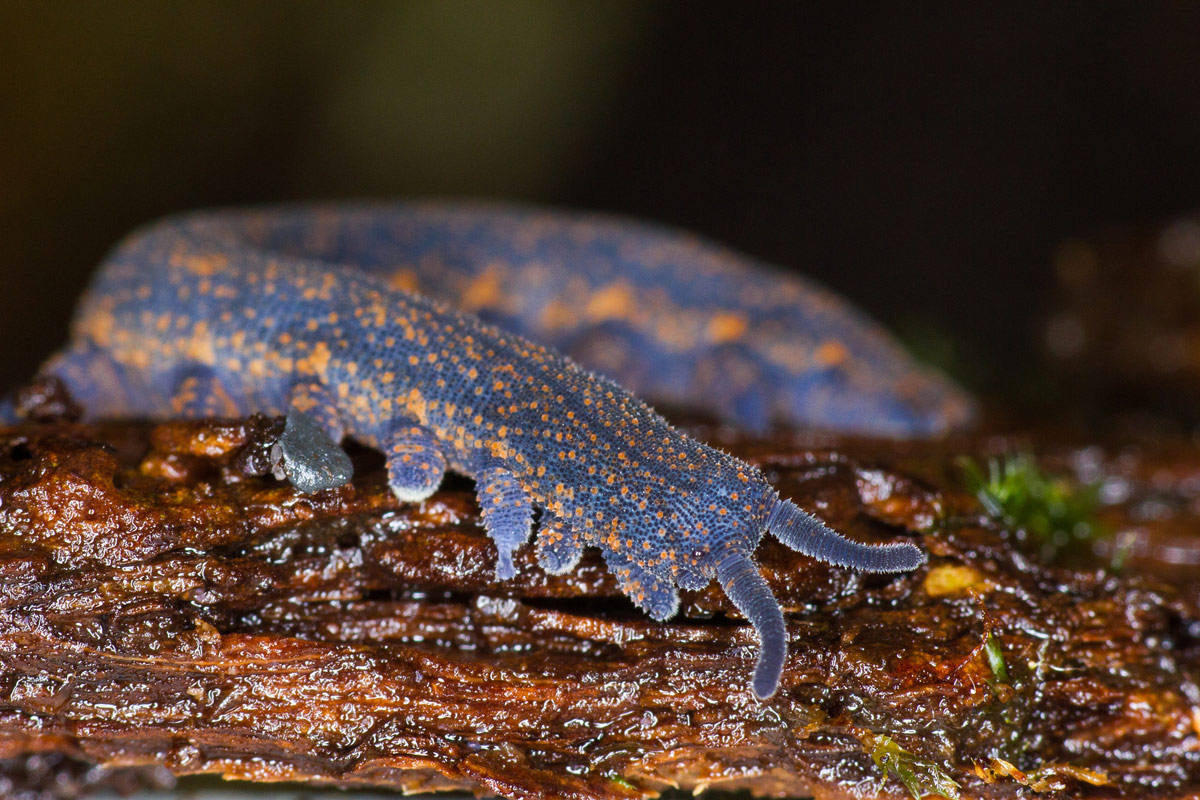 Despite their cuddly appearance, velvet worms are vicious predators, with an unusual method of capturing their prey. They track down small insects, though exactly how is unknown. Their vision is poor, and research suggests that they either use smell or air motion made by moving prey.

Upon finding an unsuspecting target, the velvet worm releases its secret weapon: just behind its head, it has a pair of highly modified limbs, which act like glue turrets. Pointing at the prey, they release a slime-rich jet at the insect, trapping it. The slime dries in the air, and the velvet worm can take its time to amble over to its prey and eat it alive.

Much like spiders, velvet worms begin digesting prey on the outside, releasing copious amounts of saliva then sucking up the soup. The velvet worms eat the dried slime as well as their prey. New slime takes a long time to produce, and can account for almost 11% of the weight of the velvet worm. For context, our skeletons weigh 15% of our own body weight. Imagine having to regrow that much of ourselves in under 24 hours. 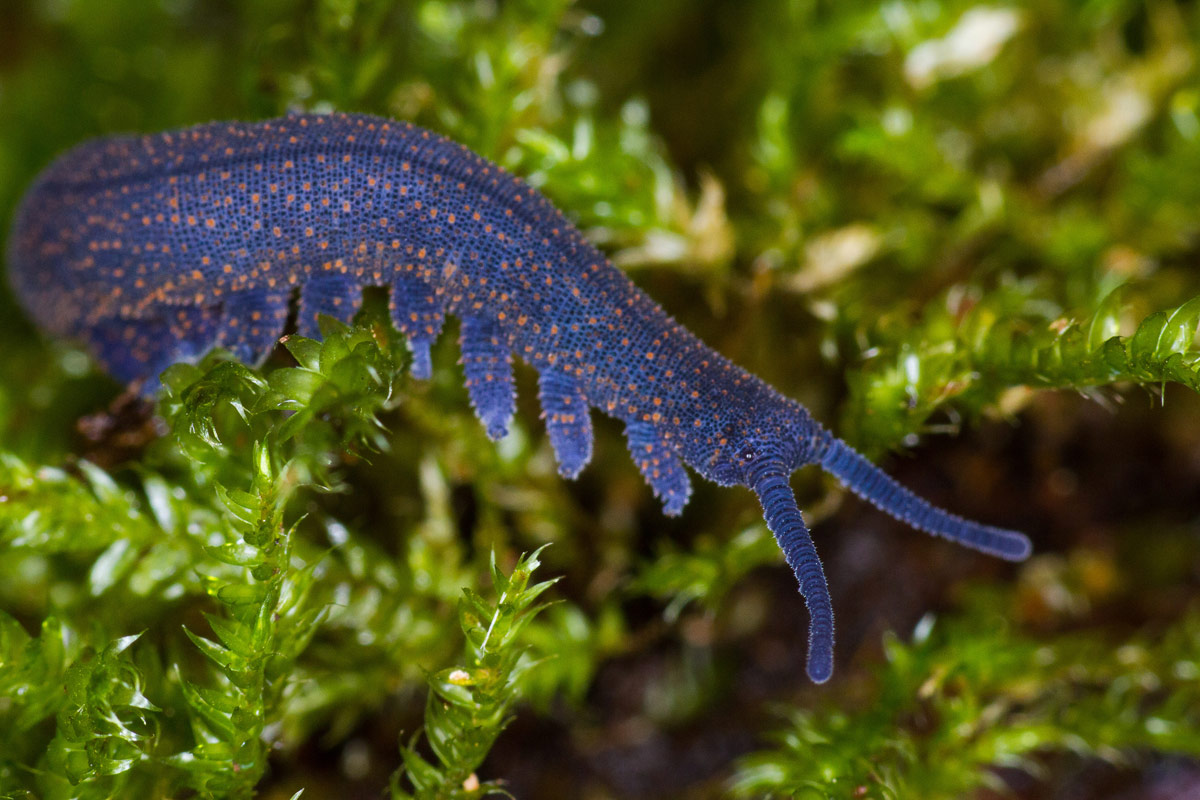 With hunting being so costly to the velvet worm, it comes as little surprise that some species choose to not go hunting alone. One Australian species- Euperipatoides rowelli- has been shown to form packs, with social hierarchy, pack protection, and team hunting. These packs have an ‘alpha female’, which usually is selected by being the largest and most aggressive individual in a group.

The velvet worms form a clump, and the largest female makes her way to the top, biting and pushing the others as she does. In this way, the velvet worms not only form a tolerance to being close to one another, but also an understanding of who is – both literally and figuratively – at the top of the pack.

The pack hunts together, trapping larger prey through using multiple slime jets. The alpha female will then, much like a male lion in a pack, push the other members aside to have their feed, after which the others will join in on the feast.

Despite their size, velvet worms are arguably the big cats of the undergrowth. They have retractable claws, stalk their prey, and some even hunt in packs. These creatures are adorable, unique, and rarely talked about. This is a bit of a shame, when they are such unusual animals with amazing capabilities.


Related Stories
The ugly-cute little monsters from the dark abyss
Release the Kraken!
She hunts for aliens under the Baikal ice
Bone eating zombie worms discovered in Mediterranean waters
The many legged cave dragons of China
//sulc.us/kgb18
/articles/velvet-worms-the-voracious-snipers-of-the-undergrowth/