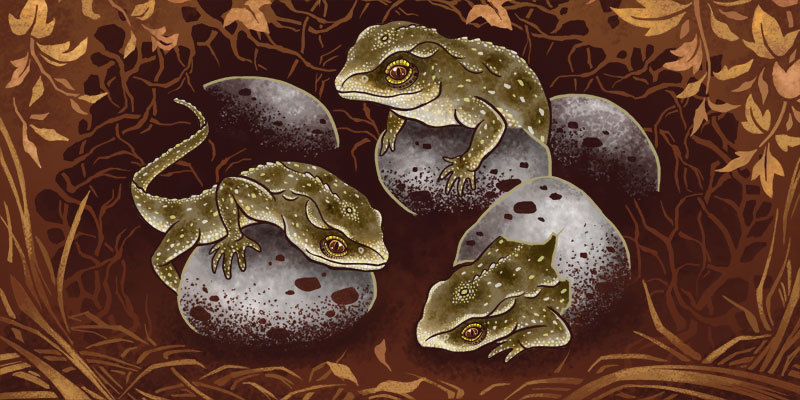 over 4 years ago by Rachel Fritts

All Posts
Imagine a world unshaped by the evolution of mammals. What kind of creatures would live there? Looking like something straight out of medieval legend, the tuatara’s unlikely existence and unusual traits weave a narrative of what might have been.

What looks like a baby dragon, sports a vestigial third eye, and can live over 100 years? Why, the tuatara of course. It might look like a wrinkly, big-headed iguana, but don’t be fooled. Its family, the Sphenodonts (from the Greek “wedge-toothed”), parted ways with the Squamates (lizards and snakes) over 200 million years ago. The strategy proved successful at the time, but today the lonely tuatara is all that remains of a once highly diverse and widely dispersed lineage.

Being the sole ambassador for an entire order of reptiles is a big responsibility. For a while, scientists thought that there were two surviving species of tuatara, but a study published in 2010 indicated that no, it was just the one. While it’s sad that the tuatara is the last of its kind, it’s actually pretty amazing that this persistent Sphenodont managed to get as far as it has. Throughout its time on New Zealand, the unassuming tuatara has lived through an 8°C global temperature drop, glaciation, mountain development, and wildly changeable flora and fauna. While the tuatara has historically been referred to as a primitive “living fossil” because of its unique taxonomic heritage, it has actually had to change a lot in its tens of millions of years of isolation. During this time, it has solved the unique evolutionary problems posed by New Zealand in its own unique way. The little rebel.

Of course the tuatara had to work with the tools it was given. Despite its dynamic history, the tuatara has retained some traits harking back to an ancient and intricate evolutionary branch that has been all but lost, making it a species of great interest to scientists. An example of one of these archaic traits is its third eye. Today, the tuatara only has two visually functional eyes – what an underachiever. These eyes are impressive in their own right, though, with highly adapted night vision and the ability to focus independently of one another. However, modern tuatara also have a vestigial eye on the top of their head, visible in juveniles but covered with a thin layer of scales in adults. Called a “parietal eye,” this third eye sports a retina, lens and degenerated nerves connected to the brain. This means that its current form likely evolved from something that at some point worked like a functioning eye. Today, however, the eye is thought to play a different, less visual role – possibly aiding in thermoregulation or setting circadian rhythms. 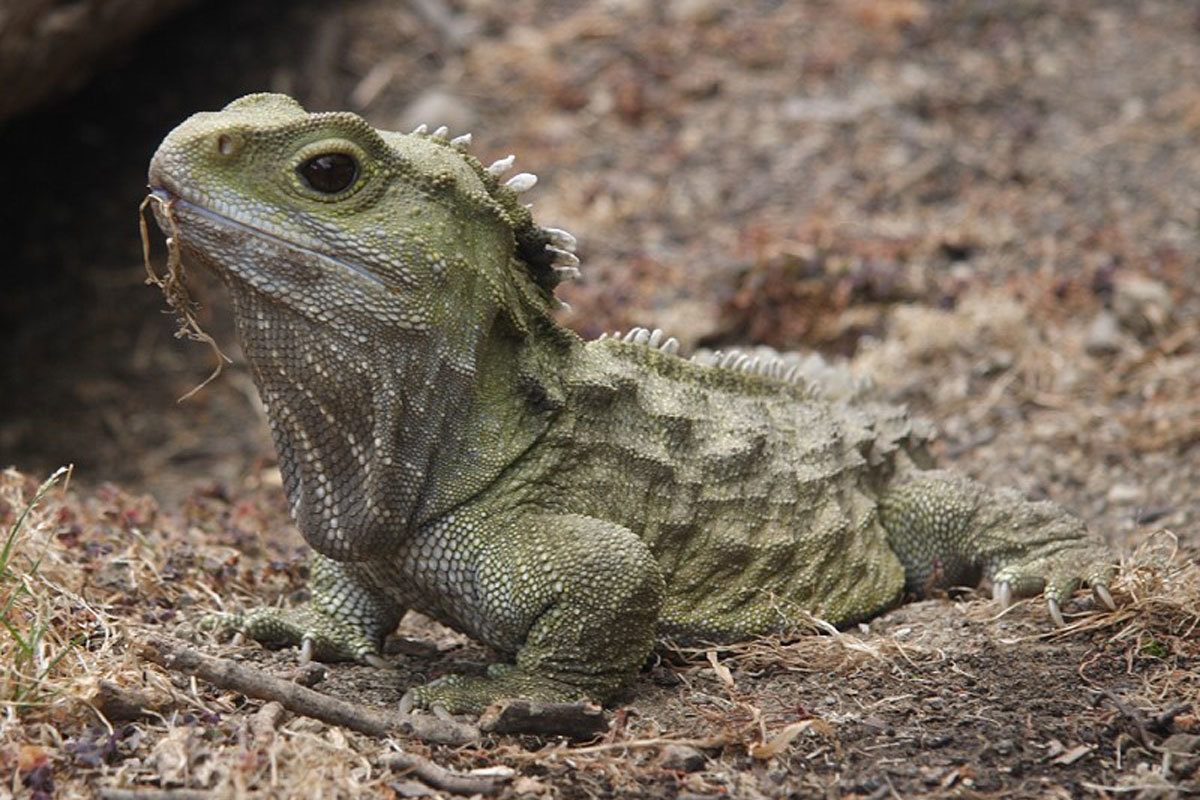 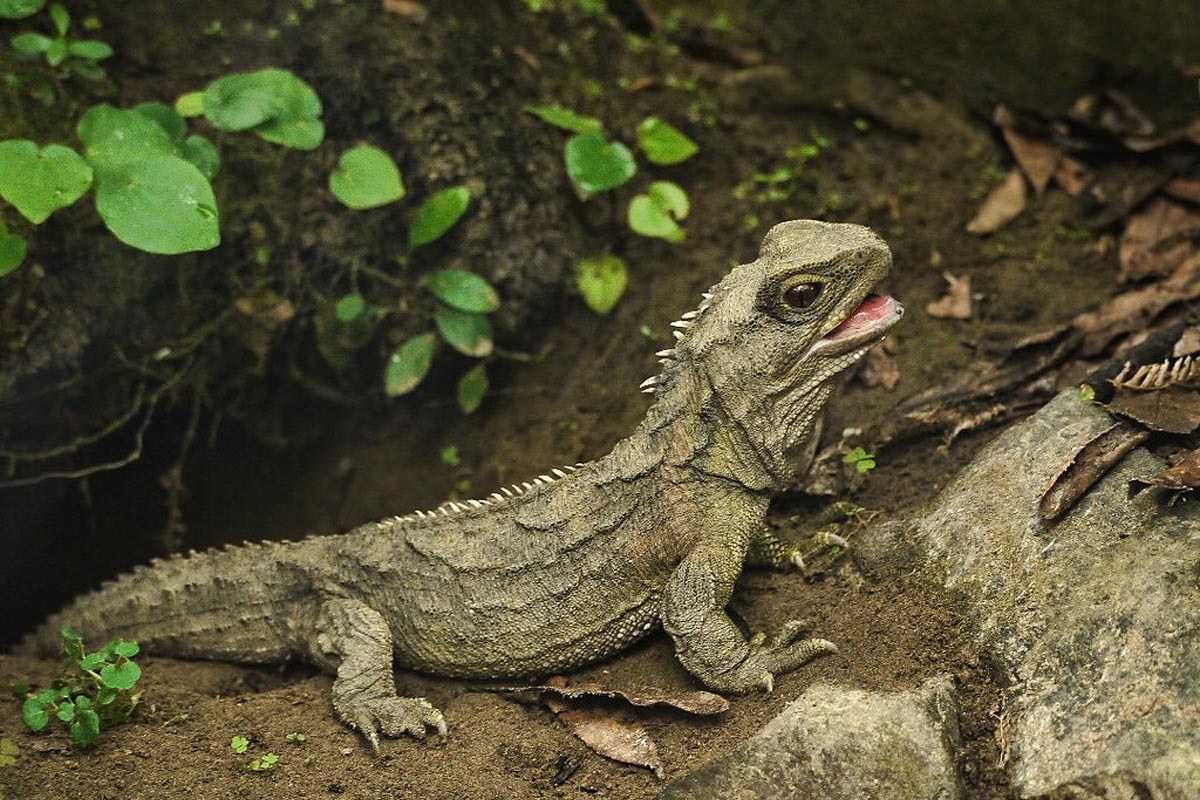 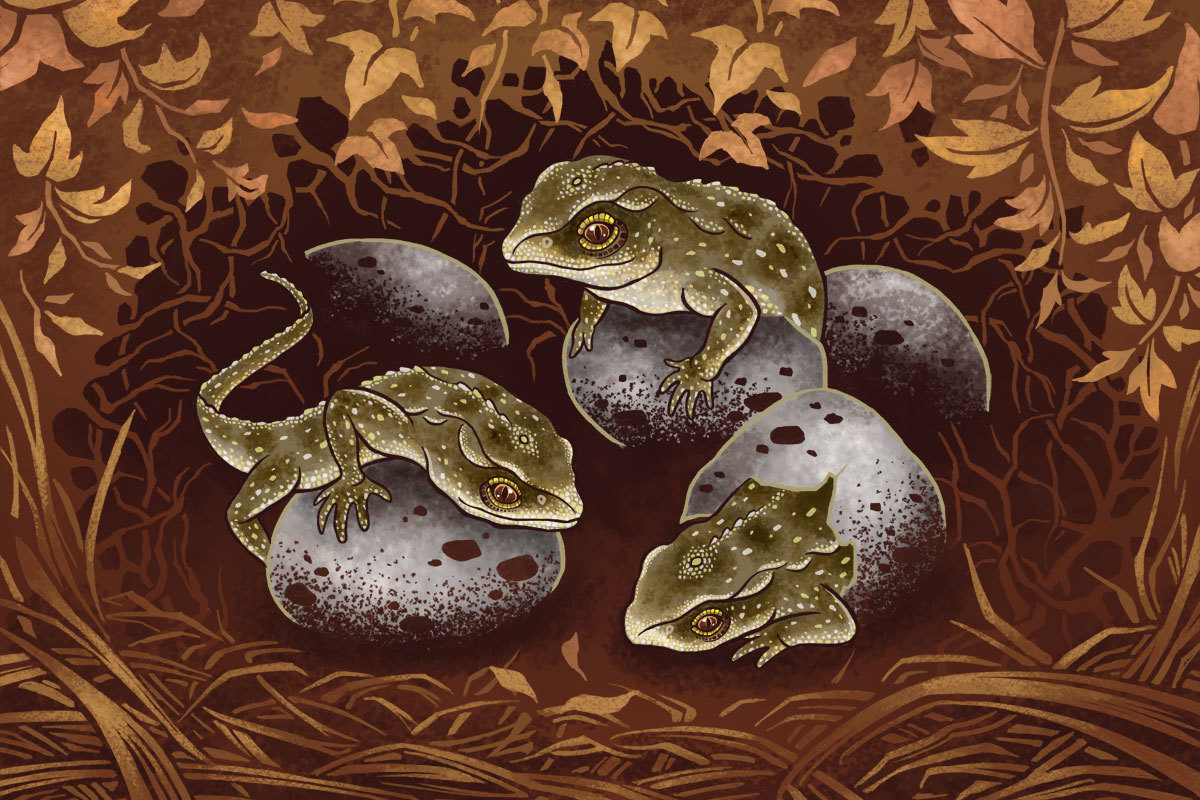 In addition to the highly developed parietal eye, tuatara have uniquely adapted teeth unlike anything else in the animal kingdom. These teeth are more specialized for chewing than those of other reptiles, and consist of two rows on top and one row on the bottom that slots perfectly in between them. This structural setup is ideal for crushing up all kinds of crunchy insects, but unfortunately, the teeth themselves are limited by the tuatara’s unique evolutionary development (in fact, they are what gives the “wedge tooth” Sphenodon genus its name). They are not separate structures within a socket like most modern teeth. Instead these primitive teeth are merely pointed boney protrusions sitting directly on top of the bone plate – once these are worn away, they cannot be replaced.  The arrangement, though not ideal, seems to have worked well for tuatara, with older individuals simply changing to a more grub and worm-based diet.

And there are plenty of older individuals – tuatara live up to 100 years in the wild, and have been known to live beyond that in captivity. The oldest known tuatara, 118-year-old “Henry,” made headlines for becoming a father at the spry young age of 111, after 40 years in captivity spent persistently uninterested in reproducing. Indeed, these reptiles are committed to a strategy of taking the slow and steady approach to just about everything. They don’t reach sexual maturity until they are between 13 and 20 years old, and don’t reach their full size until the age of 30. Once sexually mature, females will only reproduce every 2-5 years, and once eggs are laid, they can take over a year to hatch. Such a relaxed approach might seem unwise, but it is similar to other New Zealand animals, like the kakapo, and is probably a response to the limiting pressures of space on an island with very few predators. It is also a way for the reptilian tuatara to live a cold-blooded lifestyle in temperate New Zealand – its optimal temperature is between 16 and 21°C, much lower than that of other reptiles. Its metabolism is much slower than most animals as well. So slow, in fact, that it can go up to an hour without breathing – giving most whales and the world’s top free divers a run for their money.

Unfortunately, the tuatara’s slow lifestyle gives it no protection from New Zealand’s newest threat – mammals. While tuatara are able to co-habitate just fine with the native New Zealand bird species, often even sharing a burrow with shore birds, they had no natural defense against egg-eating invasive rodents like rats. The first rats were introduced by human settlers nearly 1000 years ago, and quickly found slow-incubating tuatara eggs, laid in shallow burrows, to be easy prey. It is likely that tuatara disappeared quite quickly from mainland New Zealand after humans arrived, and that European settlers further accelerated their decline. Currently tuatara are confined to just 32 offshore islands.

There might be hope for these miniature Smaugs yet, however. Recently, New Zealand announced an ambitious new plan of attack against the invasive species that have devastated its unique natural wildlife. If successful, it would rid even mainland New Zealand of all rats, weasels, and possums by 2050, allowing native creatures like the tuatara to rebuild their home there. While it won’t be easy, this plan would preserve a unique ecosystem. Tuataras and their fellow native species might not actually give us a window into the past, but they do give us a window into an alternative reality, an Earth that could have been – an Earth without mammals.

Jones, Marc E. H , et al. "A sphenodontine (Rhynchocephalia) from the Miocene of New Zealand and palaeobiogeography of the tuatara (Sphenodon)." Proceedings of the Royal Society of London B: Biological Sciences (2009): DOI: 10.1098.


Related Stories
Tanystropheus, the long-necked Triassic weirdo
Fossil reptile from the UK will cast a spell on you
Atopodentatus and its messed-up face
Frogs beneath the clouds - the biodiversity of Cusuco National Park, Honduras
Most endangered cat shows sign of recovery
//sulc.us/o9waj
/articles/tuatara-the-three-eyed-baby-dragon-of-new-zealand/