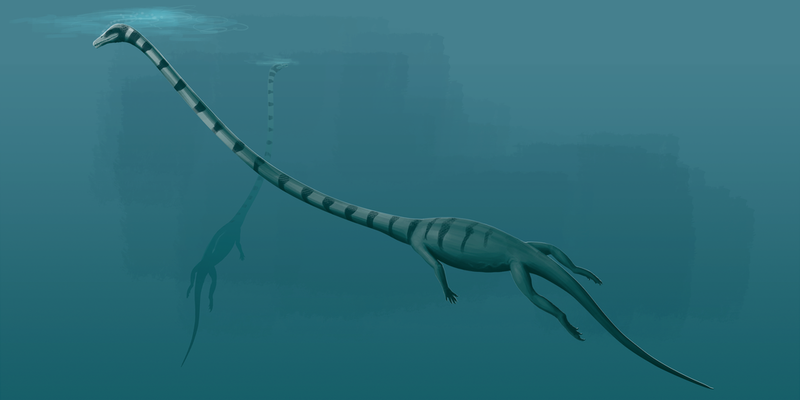 All Posts
Originally mistaken for a flying reptile (pterosaur) when it was discovered in the 1800s, Tanystropheus had a neck that would put the Kayan giraffe women of Myanmar to shame.

Found in deposits in Europe, the Middle East and China, this semi-aquatic reptile had a neck twice as long as the rest of its body. It measured 20 feet from head to tail and lived during the Triassic Period of geologic time, some 240 million years ago.

Paleontologists believe it was a piscivore, or fed on fish, based on the shape of the teeth and the fact that fish scales and squid hooks have been found near the stomach in Tanystropheus fossils. Its hind limbs were longer and more muscular than its front limbs and it probably wasn’t a very good swimmer. It may have hung out around the shoreline and walked along the bottom of the water bottom, in both environments surprising its prey with a swift vertical movement of its long neck.


Related Stories
Extinct marine reptile had the face of a platypus
Bipedal crocodile ancestor discovered in North Carolina
Atopodentatus and its messed-up face
Dolichorhynchops, the weird marine reptile with sharp pointy teeth
Fossil reptile from the UK will cast a spell on you
//sulc.us/787fg
/articles/tanystropheus-the-long-necked-triassic-weirdo/