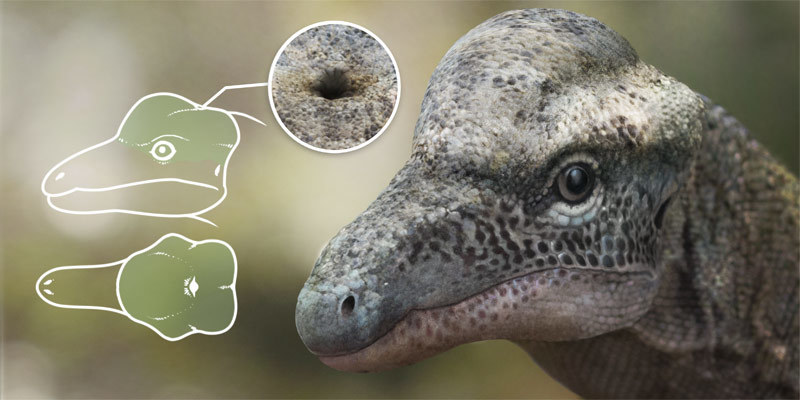 All Posts
A strange reptile called Triopticus primus increases the known diversity of reptiles from the dawn of the Age of Dinosaurs and helps scientists understand the repeated evolution of body types across the Mesozoic.

The Triassic was a time of evolutionary innovation and experimentation in vertebrate body plans. In the time following the Permo-Triassic extinction, the largest mass extinction in Earth's history, there was an explosive radiation of the surviving lineages unconstrained by competition from other organisms. Triopticus primus, a newly named archosauromorph from the Triassic of Texas, shows just how strange some of this evolutionary experimentation could be.

Triopticus is known from a single fossil found in the Upper Triassic Otis Chalk Formation of West Texas. The fossil consists of a partial skull roof, preserving the upper edges of the eye sockets, the complete brain case, and the articulation with the first neck vertebra. Almost all of the bone in the skull roof is extraordinarily thick and ornamented with knobs and bumps, except for a point directly above the brain where there is a narrow “pit” that resembles a third eye socket. There are five distinct enlargements or “bosses,” including a central forehead dome, a thick ridge over each eye, and a thick ridge over each ear. The pit is behind the dome and between the four ridge-like bosses. The fragment is approximately 10cm (4 inches) long and 9cm (3.5 inches) wide.

The name Triopticus is derived from the Latin words tri meaning three and opticus referring to eyes or vision, and is a reference to this pit. The specific name, primus, is Latin for first, a reference to Triopticus being the first of its kind. 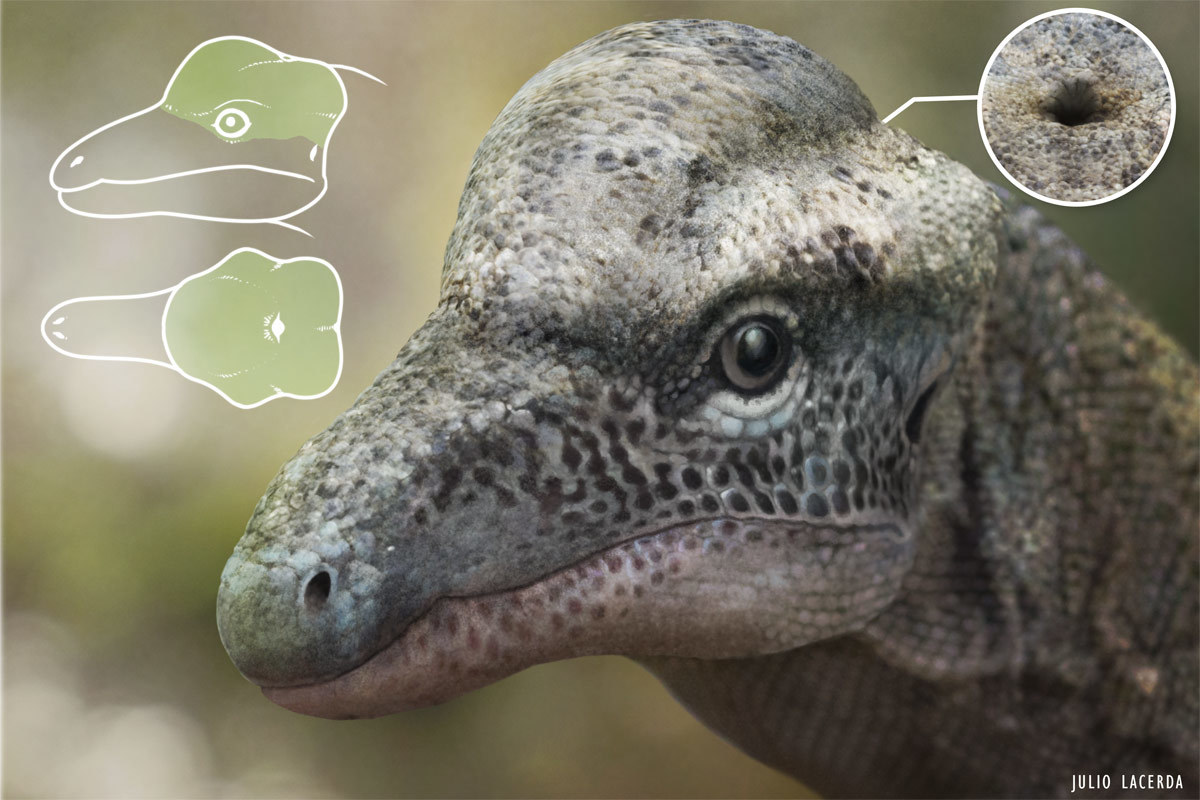 A possible reconstruction of Triopticus based on the fragmentary remains and comparative anatomy. The green areas on the head diagram represent the actual fossil.
Julio Lacerda

Triopticus was named and described by a large team of paleontologists led by Michelle Stocker. As part of their investigation, they scanned the skull using a CT scanner to view the interior of the enlarged skull roof. CT scans revealed a well-preserved brain case and semicircular canals within the bones.

Additionally, they found that the enlarged skull bones had three distinct zones. The first zone, closest to the braincase consisted of normal bone tissue. The second zone made up the core of the enlarged bone tissue and was quite dense. The third zone made up the exterior bone tissue and was less dense than the second zone, and was heavily ornamented with round bumps. The bumps cover almost the entire surface of the bone, including the sides of the pit.

The pit has no known function, although the authors suggest that it may be an epiphenomenon; in other words, it's an area of the skull roof that never expanded, so that as the areas around it expanded through ontogeny, a deep pit formed. A secondary hypothesis that the authors consider less likely, is that the pit represents a pineal eye, a light sensing patch of skin that communicates directly to the pineal gland in the brain. They regard this as less likely because there is no clear communication from the pit to the brain in the fossil, and no archosauriforms are known to retain pineal eyes.

To determine where Triopticus fell in the family tree of reptiles, Stocker and colleagues performed a phylogenetic analysis including several different reptile groups. They found that Triopticus was a non-archosaur archosauriform. Archosaurs live on today as birds and crocodilians, and include many extinct groups such as non-avian dinosaurs and pterosaurs. Archosauriforms include the archosaurs and their close kin including such reptiles as Proterosuchus, Erythrosuchus, and Euparkeria. All of the archosauriforms in this part of the tree were semi-sprawling quadrupeds with long snouts, so it's likely that Triopticus was also a long-snouted quadruped based on its location on the reptile family tree.

All of the these Triassic groups went extinct by the end of the Triassic, many falling victim to another mass-extinction. The authors theorize that the repeated body types seen in Triassic and later Mesozoic archosauriforms may have been constrained by similar selective pressures as dinosaurs and crocodilians evolved to fill niches left empty by the mass extinction.