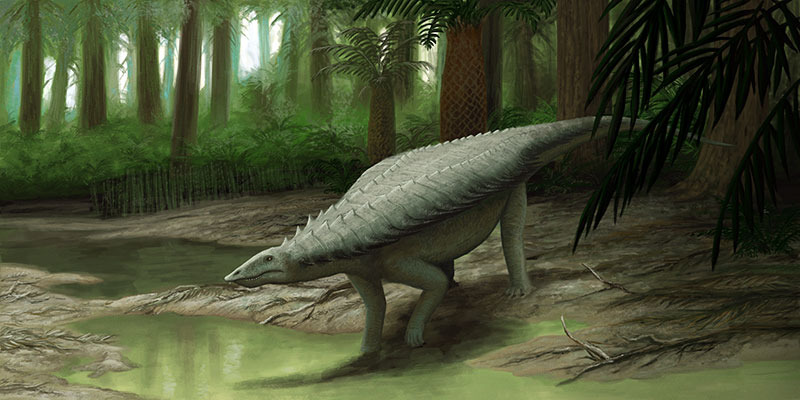 All Posts
Scientists in North Carolina have unearthed a new species of aetosaur, a group of armored relatives of crocodiles that lived around the world during the Triassic Period more than 200 million years ago.

Gorgetosuchus pekinensis becomes the latest discovery from the fossil-rich Pekin Formation in the Deep River Basin near Raleigh, North Carolina. It is the first named aetosaur from the state.

Aetosaurs were a fairly successful group of herbivorous terrestrial reptiles that looked like a cross between ankylosaurs, the armored dinosaurs, and crocodiles, for which they are distant relatives. A defining characteristic of aetosaurs is the presence of osteoderms, big bony interlocking plates that protected large portions of the body and were likely covered with horns.

Researchers found the first ten rows of the osteoderm armor that covered Gorgetosuchus’ back. Some of the armor even completely covered the aetosaur’s neck, making this a special find among its group.

While Gorgetsuchus is a unique discovery for the Pekin Formation, it’s certainly not the only recently unearthed reptile there. Earlier this year, scientists named Carnufex carolinensis, or the “Butcher of Carolina,” a 10-foot-tall crocodile relative that walked on its hind legs.