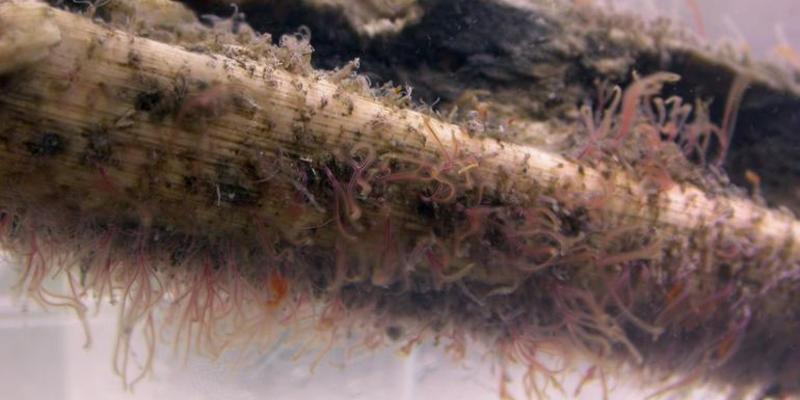 “Zombie Worms” ate through the bones of prehistoric sea reptiles

All Posts
By consuming the bones of plesiosaurs, mosasaurs and other big marine animals when they died, Osedax worms quite literally ate their fossil record.

Whales are enormous creatures. Usually, an adult whale has very little to fear in the way of predators, especially the biggest of the giants. But when one whale dies, hundreds of creatures may feed on its carcass. The so-called “whalefalls” are very important ecological events that create an entire rich and temporary ecosystem around them.

If a whale dies in the open ocean, its corpse may fall down all the way to the bottom of the sea floor, more than a kilometer away from the surface. This brings a much sought-after buffet for deep-sea creatures like giant isopods, bristle worms, hagfish and sleeper sharks, among many others. They can be sustained by one single whale for decades, since the cold waters of the deep ocean slow down decomposition and typical ocean scavengers and predators can’t go so far down.

There is one animal in particular that makes the most out of whalefalls, however. The Osedax worm, also called “zombie worms”, are specialized in eating the hardest parts of a whale carcass: the bones.

These incredible worms have no mouth nor stomach and survive entirely on the bones of fallen animals, especially whales. They feed by secreting acid to slowly dissolve the bone, and then sending a series of tendrils colonized by bacteria that break down the whales’ fat and collagen into nutrients that the bone-eating worms can absorb.

The elusive zombie worms, which were only discovered in 2002 after the advent of deep-sea diving expeditions, leave tell-tale signs of their presence in the bones they’re eating. The worms drill a main hole for themselves, and their feeding tendrils create a network of thinner tunnels around it.

The first fossil evidence of zombie worms was found in the bones of whales from around 30 million years ago. During this time, the Oligocene Period, whales experienced a boom in diversity and were really taking off as the iconic denizens of the oceans that we know today. So, at the time of this discovery, paleontologists speculated that the zombie worms evolved in tandem with their main food source, and should have appeared around the same time as big whales.

That theory was discarded when an even older set of bones was found to have signs of bone-eating worm activity, but this time it was no whale. The 66 million-year-old bones analyzed belonged to an ancient sea turtle and a plesiosaur unearthed in England.

The plesiosaur’s fossilized flipper and the sea turtle’s shell and ribs contained numerous holes and tunnels identical to the ones that are left behind by the zombie worms in whale skeletons today. Researchers concluded that these holes are different from the ones caused by other bone-consuming animals such as deep-sea sponges, and were also incompatible with lesions left behind by disease or the channels that are naturally carved by an animal’s blood vessels. This was definitive evidence that the Osedax worms are much older than believed.

This discovery has led to two conclusions: First, that the worms did not evolve alongside whales. Instead, according to supporting molecular and genetic analyses, they probably appeared around 100 million years ago - well into the Age of Dinosaurs. They must have fed on marine reptiles for millions of years and, even though some of them went extinct 65 million years ago, others (like sea turtles) managed to survive. These provided just enough carcasses for the bone-eating worms to survive until whales appeared on the scene.

Secondly, the efficiency and widespread distribution of the worms hints at was has been called the “Osedax effect”: the possibility that they ate the carcasses of many of those extinct reptiles before those remains could become fossils. This means the zombie worms left behind not only literal holes of the bones of dead sea creatures, but also in their fossil record and in our knowledge of prehistoric marine species.