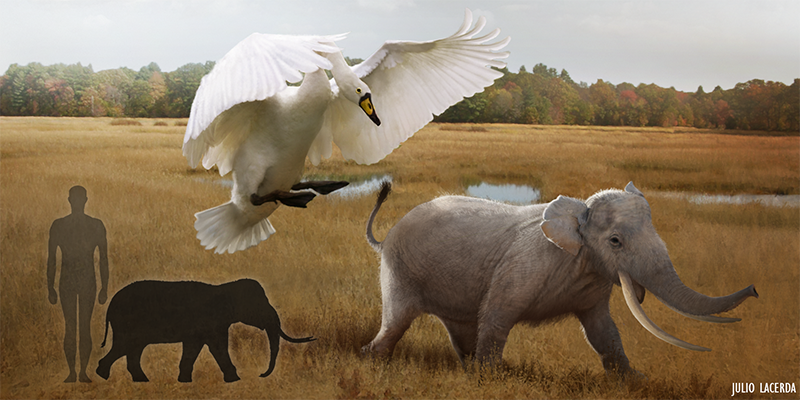 The pocket-sized pachyderms of Sicily

All Posts
Tiny elephants are far from a new scientific discovery. Many species have been found on some of the smallest and most remote parts of the world. And none were smaller than those at Spinagallo Cave, Sicily.

These days, many see the island of Sicily as an important part of the Ancient Greek civilization yet the history of the isle stretches back even further than this. For the longest time, paleontologists have been uncovering the bones of a fauna consisting of various animals that existed here even before humans arrived in these parts. Some of them were the fossils of familiar animals like otters, rodents and rabbits while others were somewhat more strange. Plenty of Mediterranean fossils indicate signs of creatures that are not found anywhere near Europe today. One of the strangest scientific discoveries to come out of the island’s rocks though, was a number of familiar bones uncovered from a cave near the capital, Syracuse. They date back to a time called the Pleistocene, an age known for varying climatic fluctuations and constant glacial and interglacial episodes. These glacials are colloquially known as ice ages, and many existed during the relatively short duration of this period.

The fossil remains were discovered between 1958 and 1960. In total, the find consisted of 3000 bones of 104 individual animals, making Spinagallo one of the richest Pleistocene sites in the Mediterranean. Bones like these had been seen before, yet at the same time there was something different about them and further studies were done by a number of researchers in the succeeding years. The most recent was a concise paper by known expert Asier Larramendi of EoFauna Scientific Research, and Maria Rita Palombo. The paper was published in 2015 as a part of Hystrix, the Italian Journal of Mammalogy and featured Larramendi’s own artwork in which the new animals were reconstructed.

The Spinagallo oddities were dwarf elephants, somewhat of a paradox to those who know and love the giants of Africa and South Asia today. However, the idea of a tiny elephant is not as strange as it sounds, neither is it a very new idea. The Greek islands seem to be full of them, with remains ranging from Cyprus and Naxos to Crete. The majority of these elephants belonged to a widespread genus called Palaeoloxodon, a close relative of Asian elephants that varied dramatically in terms of size. This animal roamed Eurasia during the Pleistocene during warmer episodes, with the European Palaeoloxodon antiquus being the best known. This species was also one of the larger elephants of the time, growing as tall as 4.2 meters and weighing 15 tons according to Larramendi’s measurements. Fossils of the European Palaeoloxodon and its neighbors have been known for centuries, with the Ancient Greeks regarding the bones as those of fallen giants. These huge creatures are thought to have roamed the Italian peninsula in large numbers and it is one of these that gave rise to the island dwarfs. 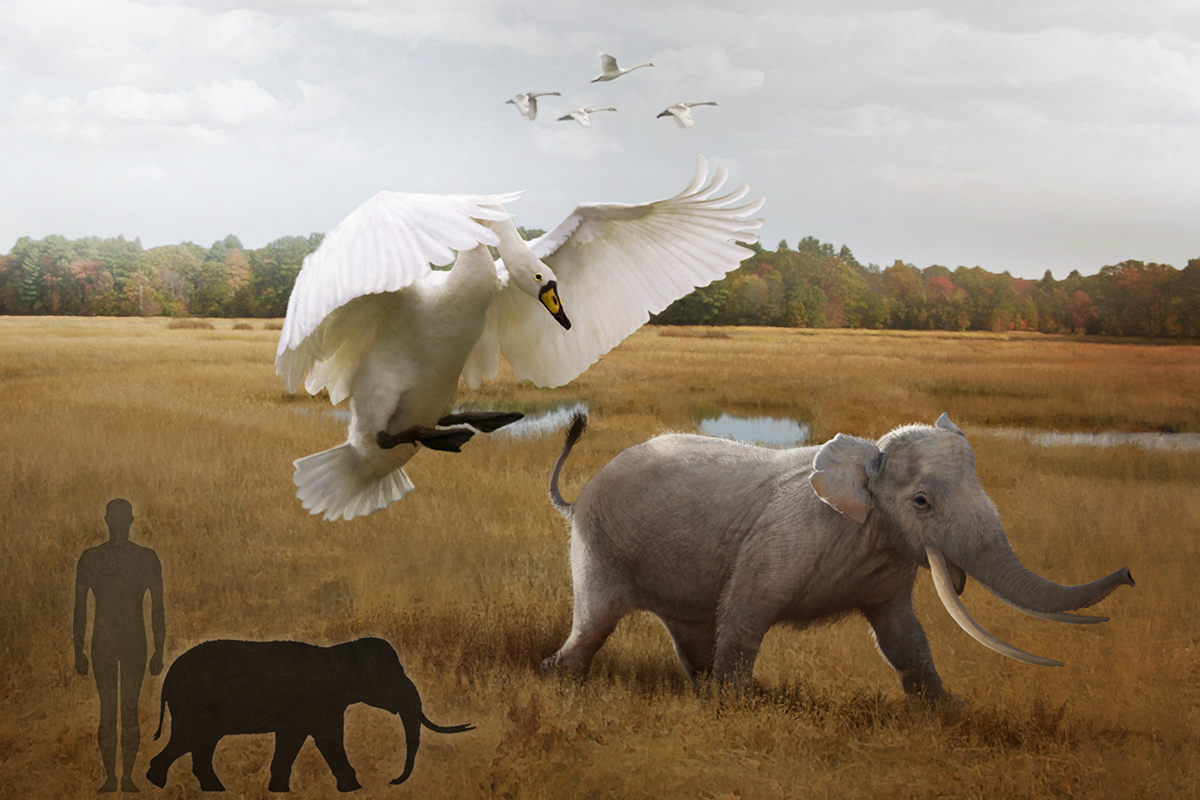 Swan versus elephant
An angry Sicilian giant swan chases an adult Palaeoloxodon bull away from its territory.
Julio Lacerda

The new paper suggests that Sicilian Palaeoloxodon falconeri is in fact, the smallest advanced elephant ever discovered. All the animals from the cave, including the endemic rodent fauna, date back to 600,000 years ago, long before any humans arrived in Europe. In terms of body form and physiology, this species is perhaps the most novel, with dwarfing having brought on changes unseen in other species. The new research paper points out that these elephants have features similar to a baby mainlander. This is a condition known as “pedomorphy”, and is where juvenile features are retained in a full-grown animal.

This also gives them a very large brain in comparison to other elephants, especially when compared to mainland Palaeoloxodon. Studies of the brain mass also point out that the dwarfs probably had good cognitive abilities. This was a surprise, considering that intelligence itself is a relative concept yet the Sicilian dwarfs seem to have been ahead of the pack. Not only are the skulls somewhat rounder and shorter but even the bodies of the Sicilian elephants were markedly different from their ancestral stock. Larramendi’s skeletal reconstructions show us that the bodies of the Sicilian dwarfs were oddly dachshund-like, with long torsos and stubby legs in comparison to their mainland cousins. To see these animals standing up straight, one needs to go to the Italian capital. In 1968 Ambrosetti, one of the researchers working on the elephants, reconstructed six good skeletons based on the best specimens from the cave. Four of these were mounted later in Rome, consisting of a big adult male, an adult female, a young male and a nearly newborn male.

Larramendi’s rigorous skeletal restorations show a male, female and a baby, all compared with an adult human at full height. The male is the biggest at around a meter tall, while the baby is only as high as a pigeon or similar bird. In terms of weight, the male is still quite hefty due to his heavily built physique and short legs, tipping the scales at around 300 kilograms. This of course, is still paltry even among fellow dwarf elephants. The female, on the other hand, is 80 centimeters in height and lacks tusks. This is rather similar to modern Asian elephants, in which males in many populations have sizeable tusks and are larger than females.

The dwarfism of the Sicilian elephants may also have implications on their temperature regulation. Larramendi asserts in the new paper that land mammals over 1500 kilograms often lack body hair in hot or warm climates, although this too is a very loose rule. The researchers write in the paper that the dwarf elephants might have had a thin layer of hair covering their bodies, somewhat greater than the sparse hair on today’s elephants. The ears might have been smaller in proportion than those of a modern elephant too. Today, pachyderms use their ears to lose heat while the tiny Sicilian elephants were doing their best to conserve and retain it. What exactly would drive such massive animals to shrink down so much? The answer lies with the “island rule”.

During the warmer episodes of the Middle Pleistocene, a myriad of big and beautiful creatures lived in Southern and Eastern Europe. It was not just massive elephants making a living here. There were also wild horses and deer to rhinos, hippos and steppe bison. It was a time of mild summers and the European megafauna had plenty of grazing to do. A few of these big mainland animals did make it across the young Mediterranean though, and once they did, some discovered a new and harsh world of bare rocks, hills and scrublands. For many of the biggest animals there was no choice but to downsize, sometimes so remarkably that by the end of the process they would be virtually unrecognizable. We sometimes call islands evolutionary laboratories since many unique animals and plants may live there. Often these creatures are isolated from mainland populations, thus allowing them to have their own independence in terms of form, habits, diet or otherwise. The condition was the same thousands of years ago, and it shows quite starkly from the Mediterranean fossils.

We have not just pygmy elephants but also pint-sized hippos, deer and wild dogs spread out across the Greek islands. This phenomenon of shrinking is known as insular dwarfism. Simply put, it is the “island rule” at work. According to this general rule, huge animals grow smaller on smaller landmasses due to a lack of sufficient space or nutrition. A small body is easier to fuel than a big one. Conversely, smaller animals may become very large in response to being isolated and far from advanced predators and competition. The dwarfism or gigantism does not happen evenly though, and several factors come into play when an animal changes this much.

Availability of food and water, terrain, temperature regulation and space all need to be considered when an animal takes either direction. Thus we see normal-sized rats and mice living comfortably alongside diminutive elephants or hippopotamses on Sicily. Yet we also have a species of giant swan here that went extinct due to climate change during the mid-Pleistocene, a good example of insular gigantism. Neither are all pygmy Palaeoloxodon species the same size, or even the same shape. Instead they vary from island to island, the same as the other ex-megafauna. Some Maltese specimens indicate animals as tall as a grown man while the Spinagallo specimens indicate the smallest sizes. All these remains paint an incredible picture of a bizarre island ecosystem. Palaeoloxodon falconeri was thus not just a carbon copy of its continental giant kin. Rather it was its own unique animal, part of a fauna that would seem out of place anywhere else.

All in all these pint-sized elephants were unique, lost in their own world and unable to survive without it. It would be a while before climatic shifts would cool Europe, bringing temperatures down to freezing extremes. Some of the island dwarfs would survive the changes while some would not. A few enterprising pygmies would keep pulling through though, even to the point of near survival past the end of their era. These little pioneers would leave bones so fresh that archaic civilizations would one day include them in their mythologies many millennia later. It would be but a reminder of a time when the Greek islands were crawling with miniscule elephants no higher than a grown man’s waist.