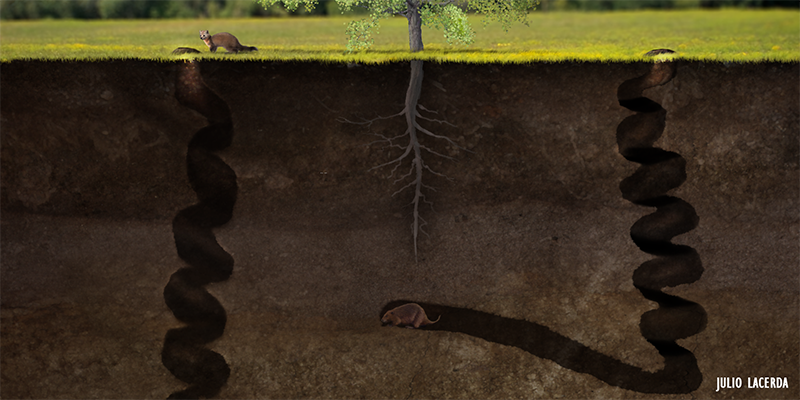 Legend of the "Devil's Corkscrews"

All Posts
Mysterious objects have been commonplace in the fossil record for centuries. However, none have been more mysterious than the so-called “Devil’s Corkscrews” unearthed in the Badlands of North America. The reality behind these rather daunting objects though, is nothing short of surprising.

For a while, prospectors scouring the plains of Nebraska and Wyoming in search of new fossils had been confounded by massive, twisted objects buried underground. The confusion began around the 1800s when these were first found. Some of the structures were as much as three meters tall, and twisted like the familiar shape of a corkscrew. They were first made popular by geologist and paleontologist Erwin Hinckley Barbour when his workers found these weird fossils in 1891. He and many others were perplexed by their size and shape. What he found were spiral, sand-filled tubes with the outer walls made of some form of twisted fibrous material. Barbour’s first theory was that these objects might have formed at the bottom of an enclosed lake. He even assumed them to be the fossils of extinct freshwater sponges at one time, a rather ridiculous notion but the only one he had.

In response to their size and shape, they were called Daemonelix. The name literally translates as “Devil’s Helix” or “Devil’s Corkscrew.” Despite not knowing what they were, the name stuck and for a while, many more of them were unearthed. Further examination revealed that the rocks surrounding Daemonelix had more in common with arid, open plains rather than with lakes, and Barbour’s newest theory was that they were a type of giant plant. The odd theories continued for the next two years and for a while, Daemonelix became just that, one of the many unidentifiable oddities from the fossil record.

Yet the one thing that confounded the scientific community at the time was the presence of rodent bones preserved inside what appeared to be chambers. They were not the most unique of rodents either, with the fossils showing animals that looked like a prairie dog or a groundhog. Had they fallen into the spiral chambers of Daemonelix’s body, or was there something slightly less bizarre going on? Two years after Barbour’s wild theories, paleo-pioneer Edward Drinker Cope hit upon the conclusion that they were the entrances to the burrows of rodents that lived underground. Cope was right, for they were indeed a new species of burrowing rodent and the corkscrews were trace fossils. In the scientific community, trace fossils or ichnofossils include objects like preserved footprints and just about anything else that is not a body fossil. They are instrumental in revealing the lifestyles of extinct animals far better than bones and body fossils can. The famous Daemonelix was no different of course. Cope and his colleagues were also able to pin down the animals found at the bottom of the burrows. The rodent fossils for example were identified as belonging to a family of strange extinct beavers and not more traditional burrowing fare like prairie dogs. Beavers though they were, none of them were ancestors of the modern beavers. Instead, today’s American beavers are descended from migrants hailing from Eurasia while the ancient burrowing beavers died out millions of years earlier. The most common of these was Palaeocastor. Their fossils show us that they were almost identical to modern burrowing rodents today, with small ears and short legs and a rather long body to fit into narrow tunnels underground. They were about 30 centimeters in length, as big as a large rat. 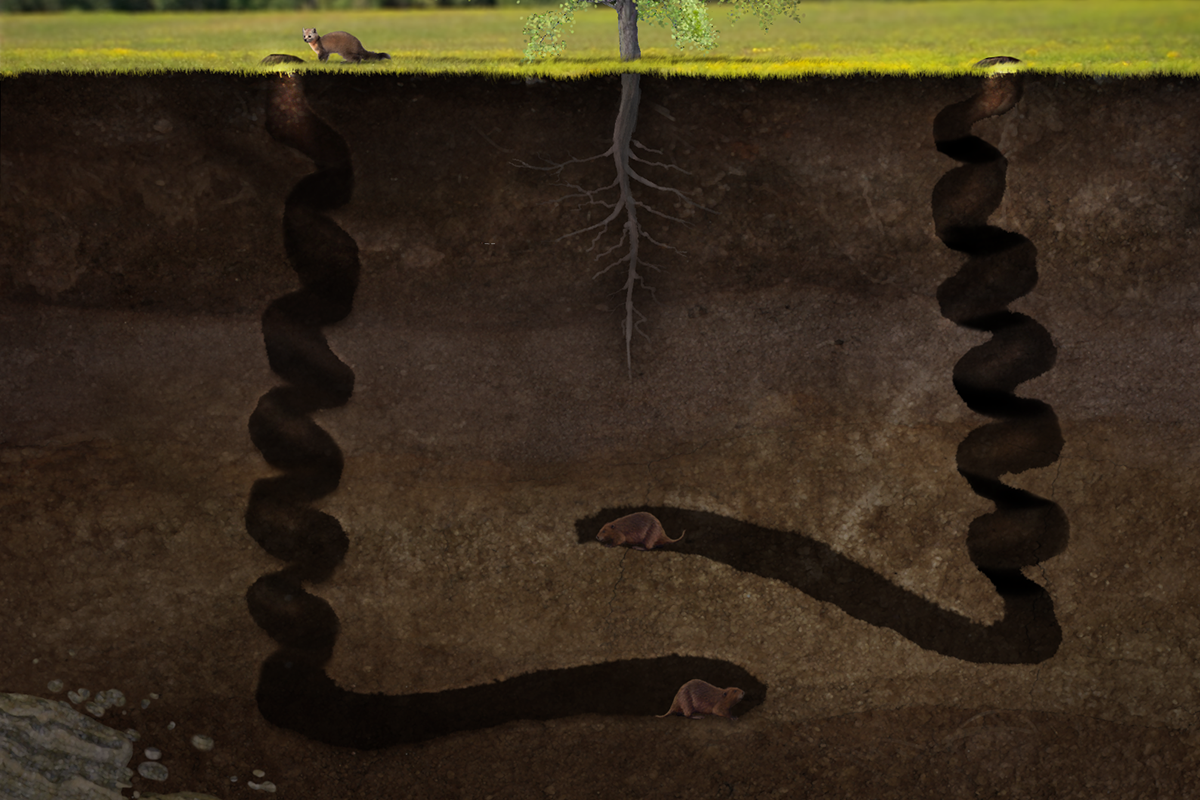 Cross-section of Daemonelix
Underground, the extinct beaver Palaeocastor was safe and comfortable in the confines of its oddly-shaped burrows.
Julio Lacerda 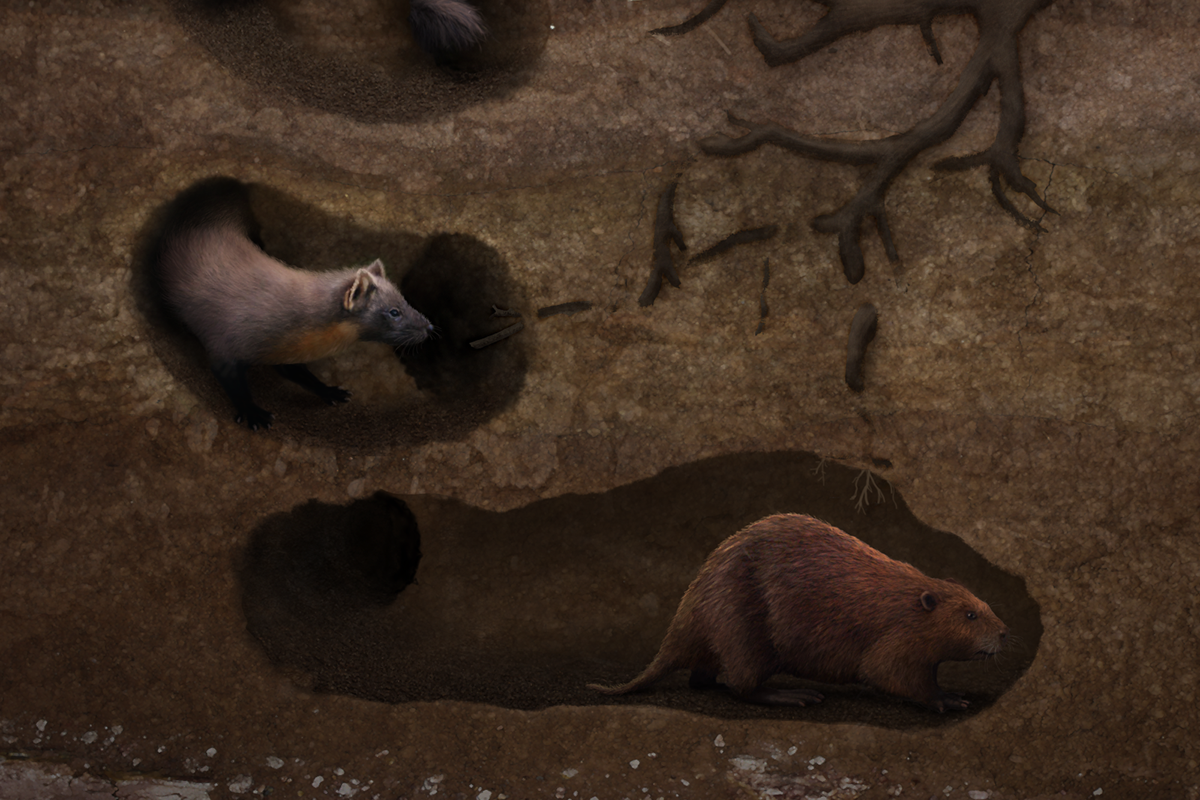 An underground drama of life and death
A Palaeocastor attempts to hide from an invading Zodiolestes in a safe part of its burrow system.
Julio Lacerda 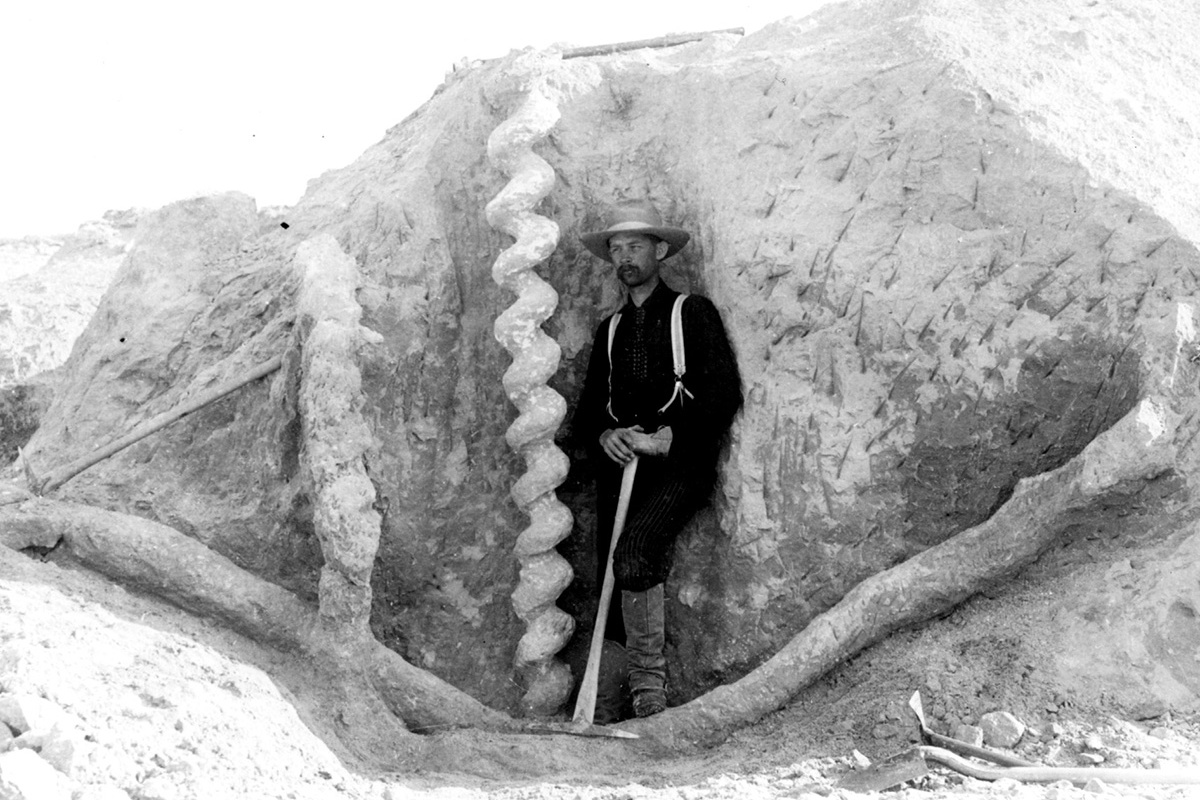 Old photo of a Daemonelix
Neuroanatomist Frederick C. Kenyon stands next to a a dug up Daemonelix from the Agate Fossil Beds, Nebraska, circa 19th Century
Wikimedia Commons

Today we know a lot about these rodents and their environment simply due to the sheer number of Daemonelix fossils found all over the Nebraskan Badlands. For one, they were incredibly different from modern burrowing rodents today due to being K-strategists in terms of the way they raised their young. This is where an animal has fewer young and invests more time in caring for them. The opposite of this is R-strategy, where an animal has a number of young but invests less time in caring for them. Today’s burrowing rodents do indeed have large litters while Palaeocastor had small litters and cared for them for longer. Studies by paleontologist Larry D. Martin have revealed that the beavers might have lived in vast towns like modern prairie dogs. This conclusion stems from the find of at least 200 burrows that might have been the remains of a colony. In life these beaver towns must have covered acres of land, and Martin had theorized a behavior similar to their modern equivalents. We do not know, of course whether guards were posted to look out for danger, and neither do we know about the dynamics of the groups in general. All we know is that several lines of rodents had been adopting similar lifestyles for millions of years, based on marginally similar needs.

The twisted chambers of the burrows might have served a highly distinct purpose. Most assume that they were a response to living in a drought-prone environment. Helical passages served to limit the amount of air circulation, so the inhabitants were not as bothered by hot or humid air as animals that dug straight passages. The Palaeocastor could rest easy even under sweltering heat. We have also found evidence of what might be living quarters, nurseries, latrines and food storage chambers in the Daemonelix fossils and casts. Not only were the little beavers complex in their behavior but each burrow was wonderfully planned to the last detail. It used a combination of claws and incisor teeth to create its underground home like a modern naked mole rat. They too use a pair of formidably large teeth to bite through the earth and clear away dirt from the walls of their extensive system of tunnels. Evidence of this comes from broad tooth marks on parts of the wall while others clearly bear signs of scratches and claw marks. The sides of the burrows had also been lined with plant fibers and parts of roots, thus causing Barbour to assume that they were indeed a species of plant.

We know a great deal about Palaeocastor thanks to its strangely-shaped burrows but what exactly was its world like? Somewhere between 25 and 20 million years ago, the early grasslands were beginning to spread across the face of southern and central North America. It was a time known as the Early Miocene, and the world had been undergoing a series of dramatic cooling events. This corresponded with the Antarctic ice caps growing larger in size and changes in worldwide ocean currents. It also caused the death of the tropical and subtropical rain forests that covered the Northern Hemisphere.

Large areas opened up and the hardy, damage-resistant grasses began their conquest through these new plains. It was these that the beavers probably fed on, and used to construct the outer walls of their underground homes. The area was also somewhat volcanic, as evidenced by the great amount of volcanic glass in the soil. During the fossilization process, the soil and the roots had become embedded in silica and this silicification enabled them to be preserved. The volcanism in Miocene Nebraska has also allowed for the preservation of other, much larger animals. The Agate Fossil Beds National Monument has preserved a wide variety of contemporary mammals, from running rhinos to pygmy camels. The giants in this ecosystem included fearsome omnivorous entelodonts as big as bison and high-browsing chalicotheres with intimidating claws. A twisted burrow entrance could of course, deter predators too and there were plenty of these during the Early Miocene. On the surface were bear-dogs ranging from fox-size to black bear-size. Any of these animals might have preyed on the burrowing beavers, either taking those on the surface or by simply digging them out of their burrows.

More direct evidence of predation comes from the Daemonelix themselves. The bones of a primitive weasel named Zodiolestes have been associated with these burrows. It was somewhat similar to its present-day kin and played the part of today’s weasels or ferrets. It had been actively invading Palaeocastor towns to prey on the weak, injured and young. We see the same behavior with black-footed ferrets and prairie dogs, as well as polecats and European hamsters. Through this they provided a good and long-lasting source of protein to the Agate Falls ecosystem’s smaller carnivores. At the same time, the beavers might have confronted any enterprising enemies with a display of sharp, powerful teeth, an intimidating display in such dark and claustrophobic conditions.

While there were three distinct species of Palaeocastor around, they were not the only odd burrowers in Miocene Nebraska. Fossils in the Harrison Formation indicate that there were more burrowing rodents, including the rather gopher-like Gregorymys. This too was a specialist at navigating through volcanic glass-rich soil on its search for roots, tubers and other foods. Their burrows have often been found in close proximity to the Daemonelix. Unlike the beavers, the gophers were making rather small and narrow burrows but were also using a claw-and-tooth system to dig their tunnels. All in all, the Daemonelix paint a vivid picture of a lost world in the American Badlands. Weird mammals were everywhere and none were stranger than those that lived underground. with the eventual extinction of Palaeocastor, many more species of rodent would rise to dominance, burrowing under the grasslands for over 20 million years to come.


Related Stories
Terminator pigs: Rise of the entelodonts
Giant hyena versus tusked rhino
The giraffe's heavyweight cousin gets a facelift
What killed the real-life King Kong?
The prehistoric beast with the ‘hairstyle’ of a Star Wars queen
//sulc.us/9escz
/articles/legend-of-the-devil-s-corkscrews/