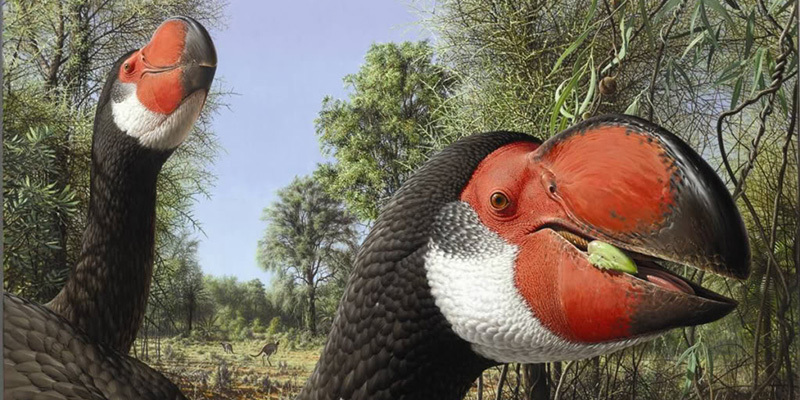 The mixed-up eggs of Australia’s mega-birds

about 5 years ago by Robert Katz

All Posts
Eggs thought to belong to the giant bird Genyornis were likely laid by a much smaller extinct bird from another branch of the family tree.

Australia as we know it is a land of extreme oddities. From ubiquitous marsupials to bizarre reptiles and families of birds found nowhere else on earth, the “island” continent is home to the most unique fauna on the planet. Prehistoric Australia was just as bizarre, and populated with even more strange beasts. Among these were some of the largest birds to ever live.

These were the dromornithids (“running birds”), colloquially known as mihirungs, after a legendary giant emu of Aboriginal folklore. Despite their superficial resemblance to emus and other large, flightless running birds, recent studies classify the dromornithids as being most closely related to waterfowl – earning the colorful nickname, the “demon ducks of doom.”

Because dromornithids lived so recently – until only 50,000 years ago, when they would have coexisted with humans – there is a fair amount of fossilized material with which their general biology can be determined. Throughout the sandy Australian dunes, numerous eggshell fragments have been recovered from what were thought of to be one species of dromornithid, Genyornis newtoni . These eggshell fragments were found in association with the shells of modern emu eggs, and it appears both were common between 300,000 and 100,000 years ago, nesting throughout the continent in the warm sand.

However, reconstructions of the eggshell fragments, done by Natalie Schroeder of the South Australian Museum, reveal an unexpected, and unusual, fact: the eggs from what are thought to be Genyornis appear to be slightly smaller than modern emu eggs. If these truly were dromornithid eggs, they would be highly unusual – adult Genyornis were a whopping six times as large as a modern emu. This startling body-to-egg size ratio was an indication that perhaps the eggs being described as belonging to Genyornis were from an entirely different bird.

Besides emus and dromornithids, there were no truly big birds living on mainland Australia. Moas, a member of the dinornithidae family, were living at the same time on New Zealand and persisted until very recently. These included the tallest birds to ever live, with the absolute tallest reaching almost 4m high. Even the smallest moas – still big as far as birds go – laid larger eggs than the purported Genyornis eggs.

Recently, however, another big bird has been added to the roster of prehistoric Australia: Progura gallinacea. This bird was not a mihirung, or a moa, or an emu – in fact, it was a giant megapode. Megapodes exist today in the form of some of Australia’s more common ground birds, including the malleefowl and the brush-turkey. Unlike these, P. gallinacea was as tall as a kangaroo, and weighed as much as 7kg – three times as large as modern brush-turkeys. This size puts them close to scale with modern emus, so the similar egg size makes sense for this species.

Megapodes are known for their unique nests. Unlike most birds, megapodes construct giant mounds of soft, warm earth or sand to incubate their eggs. This style of incubation – burying one’s eggs and leaving them be – is much more similar to how turtles and many lizards incubate, rather than other birds. While Progura lacked adaptations for constructing such mounds, it appears that it might not have needed to. The abundance of eggshells in Australian sand dunes indicate that this bird was using these dunes as an even more convenient method of incubation – rather than burying them, laying their eggs tucked away in the dunes.

Although the mystery of the Genyornis eggs appear to have been resolved for now, it is clear that the giant megapodes suffered the same fate as the mihirungs. Shortly after humans arrived in Australia, the giant birds disappeared from the landscape. It is likely that these birds, having evolved on an island, were naïve to the newly-established predators, making them, and their giant eggs, easy targets for humans on the hunt.