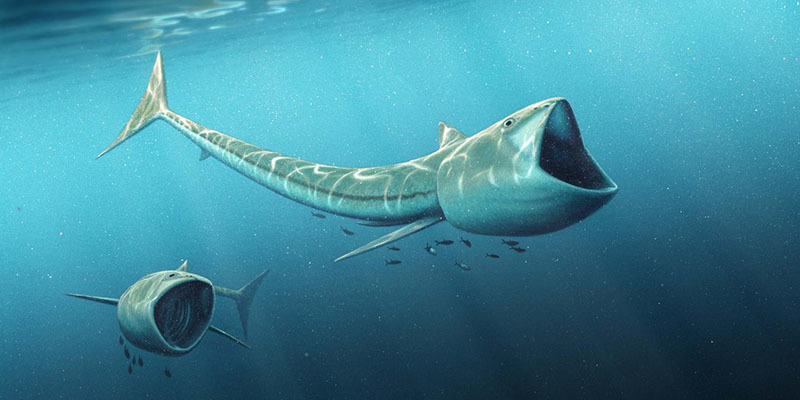 The big-mouthed filter feeding fish of the Cretaceous

All Posts
While filter feeding nowadays is seen in many invertebrates, fish and sharks, the fossil record of this feeding behavior is patchy. The discovery of two more skulls add to the diversity of animals that swam through the Mesozoic oceans like a whale shark.

Back in 2010, the genus Rhinconichthys was named after one skull recovered from England. Only recently, one new skull from Colorado and another re-examined skull from Japan have been assigned to the same genus, showing the diversity and global distribution of Rhinconichthys.

Although only known from skull specimens, Rhinconichthys is estimated to have been 2-4.5 m (6.5-15 ft) long when alive. However, it is known for an unusual specialization among bony fish, namely a pair of bones called hyomandibulae which allowed it to swing its jaws open extra-wide like a parachute. This adaptation would have allowed it to go through plankton-rich water as it swam with its mouth open, known as suspension feeding. It also gives the genus its name which literally means a fish resembling Rhyncodon, the whale shark.

Alongside the original specimen, the two new skulls respectively named R. purgatoirensis and R. uyenoi now make up the elusive genus, fueling the studies of suspension feeding in the age of dinosaurs.