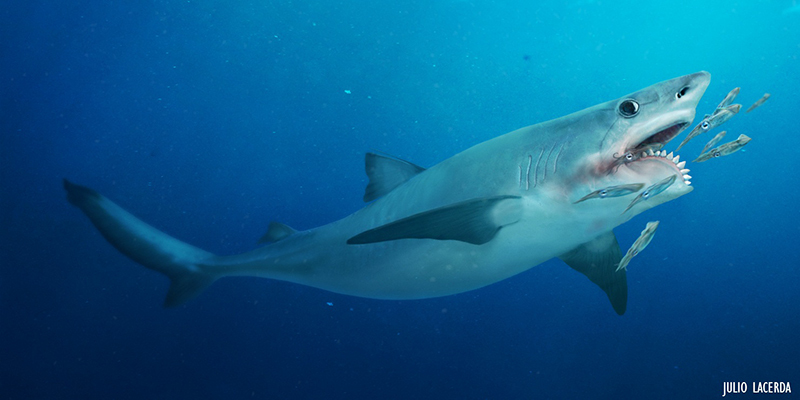 All Posts
The so-called “buzzsaw shark” Helicoprion was a prominent feature of the oceans roughly 290 to 250 million years ago. Known mostly for its strange spiral set of teeth, it was also a titanic marine monster that sometimes stretched more than 12 meters in length and was the biggest marine animal of its day.

A prodigious new fossil find from the Phosphoria site in Idaho was announced during the Rocky Mountain (63rd Annual) and Cordilleran (107th Annual) Joint Meeting of 2011. The fossil was from a well-known Idaho beast, a bizarre and extinct giant fish known as Helicoprion. The find was described by a team consisting of Jesse B. Pruitt, Dr. Leif Tapanila and colleagues from the Division of Earth Sciences, Idaho Natural History Museum at the Idaho State University.

This animal has been in the public consciousness for many years now, but the new discovery reveals something remarkable. Helicoprion had a whorl of teeth that fit into the front of its jaws, with some whorls reaching remarkable sizes. The new tooth whorl was 45 centimeters (18 inches) in diameter, and belonged to an as-yet undescribed Helicoprion species. The specimen was given the designation of IMNH 36701, after the Idaho Museum of Natural History.

Comparisons with other members of the genus revealed a probable colossus that the researchers think might have grown more than 10 meters (33 ft) long. Another specimen was published in 2013, though this was found much earlier, during the 1980s. Only recently did Pruitt, Tapanila and team study this second find, and the results were truly shocking. The second find, IMNH 49382 is incomplete but Pruitt’s research reveals a tooth whorl up to 60 centimeters in size. This corresponds to a gargantuan creature reaching and possibly exceeding 12 meters (40 ft) long. 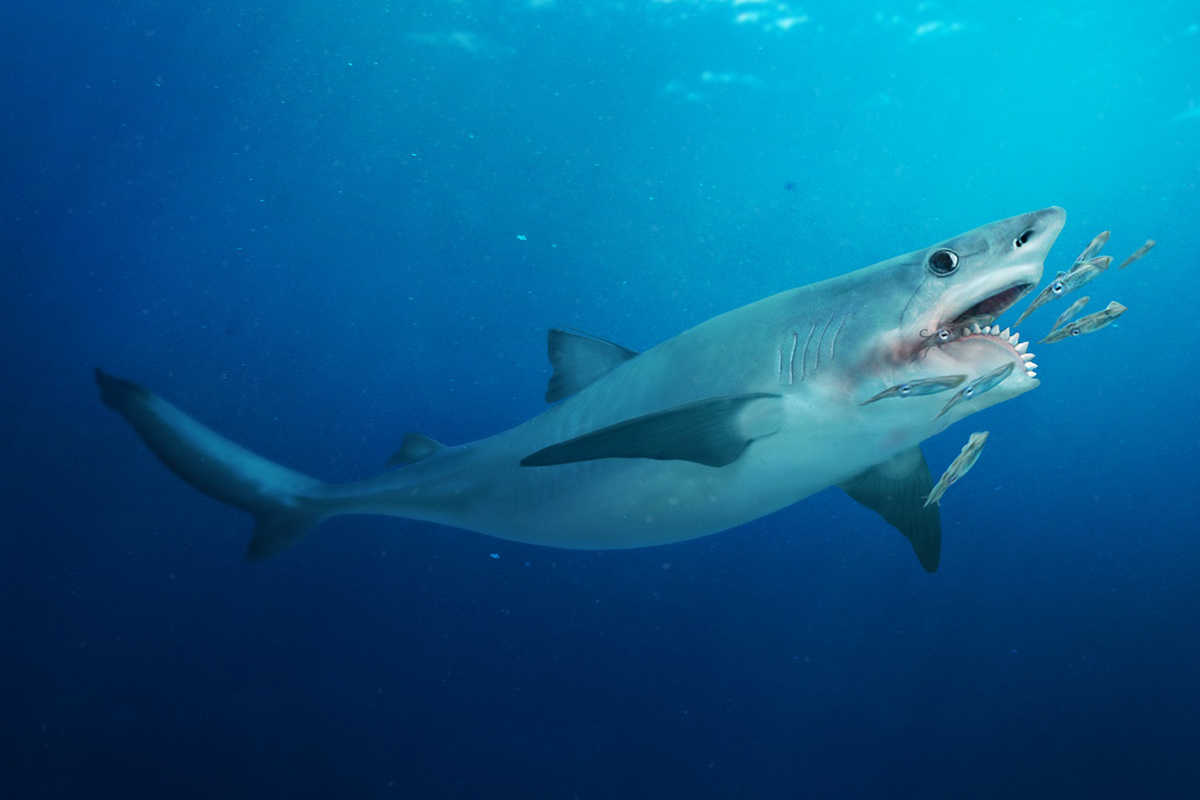 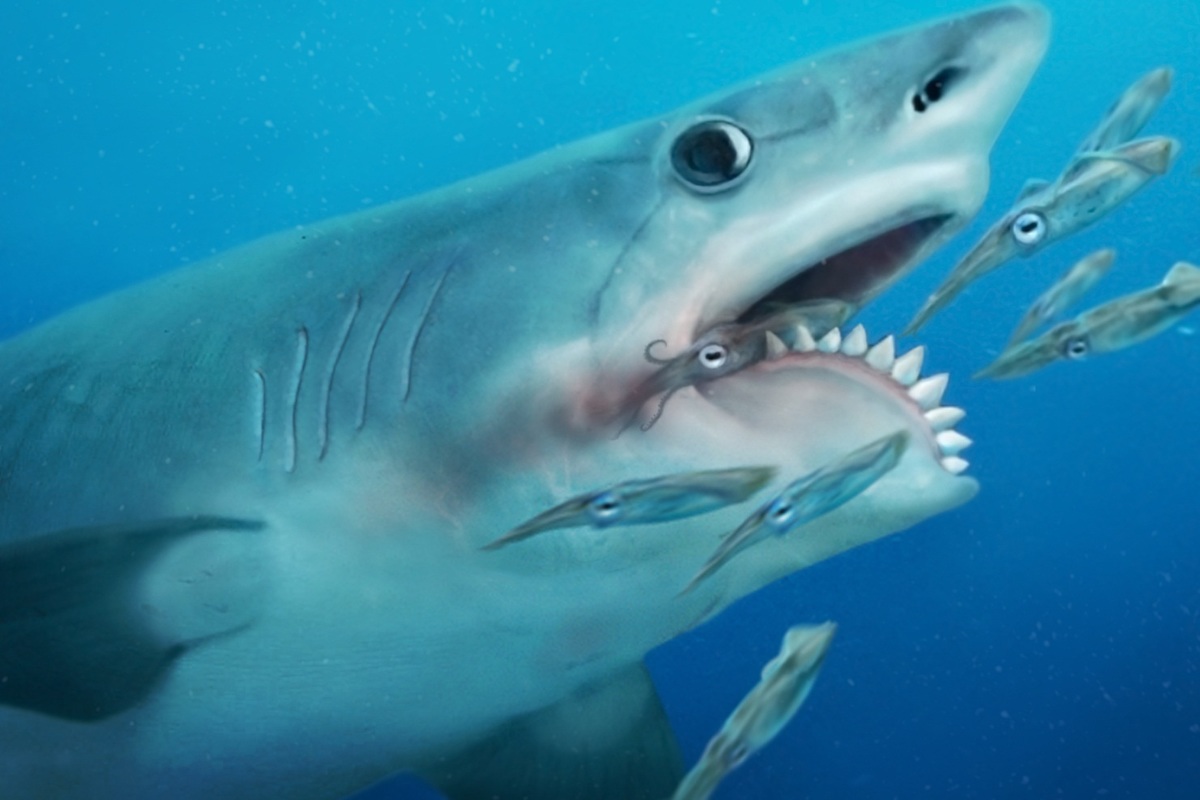 Face of a predator
A close-up view of the powerful "buzzsaw shark" Helicoprion.
Julio Lacerda

This indicates that this particular species of Helicoprion was not just among the biggest of all fish but was also the biggest marine animal of its time. Not only is IMNH 49382 the largest Helicoprion we know of, but it also contains jaw material and Pruitt adds that there will be further CT scans done on the find.  More comparisons done with a much smaller species, Helicoprion davisii, also indicate how it got so huge.

The giant new species probably had an extremely accelerated growth rate, about five times as much as H. davisii, which was how it managed to get so large. This puts the Phosphoria specimen as one of the biggest marine vertebrates of its time and probably one of the biggest-ever cartilaginous fish. The species to which the giant was compared, H. davisii, had a whorl just 23 centimeters when going by the specimen named IMNH 37899.

This smaller species is the most common specimen in the Phosphoria and the giants are remarkably distinct from this species. For instance the common smaller species has widely-spaced and stout teeth while the relatively large H. bessonowi from Russia has narrower and more closely-spaced teeth. Pruitt adds that the very large Idaho specimen may be a bigger body morph of this Russian species. Therefore not only have these two discoveries helped to enlarge Helicoprion, but they have rewritten the evolutionary relationships of the animal as a whole.

This is not the first time this creature has been given an image redo though, and Helicoprion’s history includes some odd and contorted views of its biology. All this confusion was due to the animal’s oddly-shaped teeth, which grew as a circular buzzsaw-like whorl shape. Sometimes there could be more than 150 teeth in the largest whorls. But how they used the whorls was a mystery for years since the animal’s discovery.

The first fossils of Helicoprion were scientifically described in 1899 on the basis of a fragmentary find from Kazakhstan. The remains were named by Russian geologist, Alexander Petrovich Karpinsky, who gave the remains their current name. Soon, the name stuck as scientists scrambled to try reconstructing the creature from remains as limited as a tooth whorl.

At one point in time, it was popular to reconstruct this organ as an ornament stuck to the dorsal fin, with an additional attachment stuck to its snout. Sometimes it was stuck to the animal’s upper jaw, while at other times it extended past the lower jaw, flailing like a spiky whip in the water. Also it was at this time that Helicoprion was reconstructed as being a proper shark, complete with five gill slits.

As time passed by, the buzzsaw-bearing shark became even more ridiculous-looking, with some reconstructions putting the spiky appendage at the end of the jaw. This was the most popular version of the creature for a while. It was long and narrow, with a goblin shark-like skull and physique, made famous by the reconstructions of paleo artist Ray Troll in 1994. Later studies though, put this whorl deeper inside the mouth, thus resulting in a very standard-looking “shark” body and an open mouth to display the tooth whorl stuck to the throat.

It was only in 2013 that Troll got back to renewing the looks of the animal by putting its impressive whorl at the end of the lower jaw once more. He was joined in 2013 by Dr. Leif Tapanila, Jesse Pruitt and their colleagues to uncover the secrets of the animal’s head and how the whorl fit into the jaws.

The team used high-resolution CT scans to properly restore the animal, even managing to completely revamp its identity in the family of cartilaginous fish. They found out that Helicoprion was not a shark. Rather, it was a gigantic, ancient ratfish relative called a eugenodontid.

This extinct family, the eugenodontids, include some monstrous creatures, like the long-snouted Ornithoprion, the uniquely scissor-toothed Edestus and the similar-sized though slimmer Parahelicoprion. They were all incredibly specialized animals and were some of the largest and oddest big vertebrates in the oceans of both the Carboniferous and Permian periods.

The ratfish, or chimaera, still exists today in the deepest parts of the ocean, seeing in the dark waters with their massive eyes. They have rat-like tails and move close to the sea floor, crushing shellfish with their teeth. These chimaeras are quite and slow-moving elusive and not very well known to the general public, though millions of years ago they had produced a marvelous array of weird forms like the giant eugenodonts. They are related to both sharks and rays, and are just as ancient.

While Helicoprion probably had the robust body of a shark-like pelagic cruiser, it might still have had some of the features that pertain to its modern chimaera relatives. Of course, the animal’s face has been altered completely, with a shorter skull and the tooth whorl being visible at the end of the jaw. It was using this unique appendage to tackle armored cephalopods like ammonites and nautiloids, as well as squid and probably armored fish. It was possibly an active hunter with an aggressive lifestyle. Thus it would not have had the single gill opening of more normal chimeras. Rather, Helicoprion might have had the shark-like configuration of five slits owing to its lifestyle.

Helicoprion as a genus lasted from 290 to 250 million years ago, a long geologic stretch from the Early Permian to the Early Triassic. Whatever it and its oddball relatives were doing, they were doing it right. They were a highly successful family that managed to be not just the weirdest but also among the largest marine vertebrates of their time.


Related Stories
The mighty Megalodon shark may have starved to death
The big-mouthed filter feeding fish of the Cretaceous
Giant 20-foot-long sharks swam over the ancient American Great Plains
The biggest insect ever was a huge "dragonfly"
When monsters ruled the water: The Age of Fishes
//sulc.us/u7nbi
/articles/buzzsaw-toothed-leviathans-cruised-the-ancient-seas/