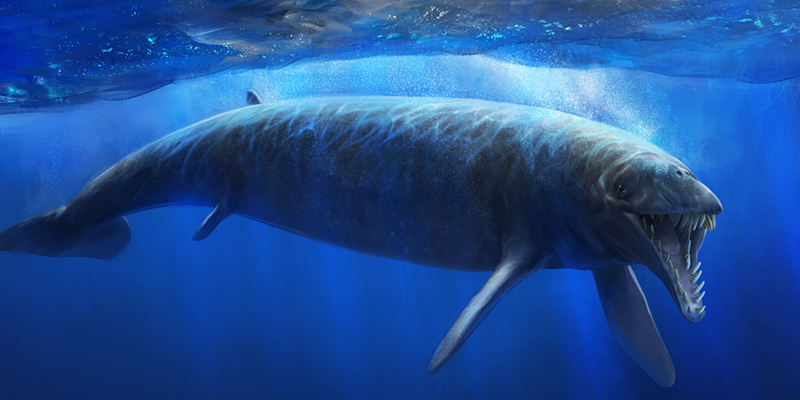 The evolution of whales

almost 5 years ago by Hans Thewissen

All Posts
Whales are mammals! While that simple concept is a platitude to 21st century readers, it was not for most people throughout human history. Even those who were intimately familiar with the shape and behavior of whales, the whalers who hunted them, thought of whales as fish.

In Moby Dick, Herman Melville has his protagonist enumerate the reasons why scientists believe that whales are mammals, but then, with bold eloquence, he exclaims: “Be it known that, waving all argument, I take the good old fashioned ground that the whale is a fish, and call upon holy Jonah to back me.”

That American classic was written in 1851, eight years before the publication of another classic that shook the intellectual world of its time: The Origin of Species. In it, Charles Darwin proposed that all species were descended from other species and eventually had one common ancestor. With whales being mammals, and mammalian ancestors being land animals, whale ancestors must have lived on land too. Even Darwin struggled with that concept, he proposed, in the first edition of his book, that whales might have evolved from ancestors that waded in rivers catching insects. This brought ridicule from his readers, and the statement was shortened in subsequent editions until whale origins was banished altogether in the last edition published during his life.

Indeed, the land ancestry of whales remained a thorny issue for the scientists, as all fossil whales, throughout the 19th and much of the 20th century showed the fully aquatic features of animals that could not survive on land. Where were those land ancestors, or the intermediates to life in water, creationists demanded and they made fun of the idea that whales were somehow related to cows and their even-toed relatives, calling the idea an "udder" failure. 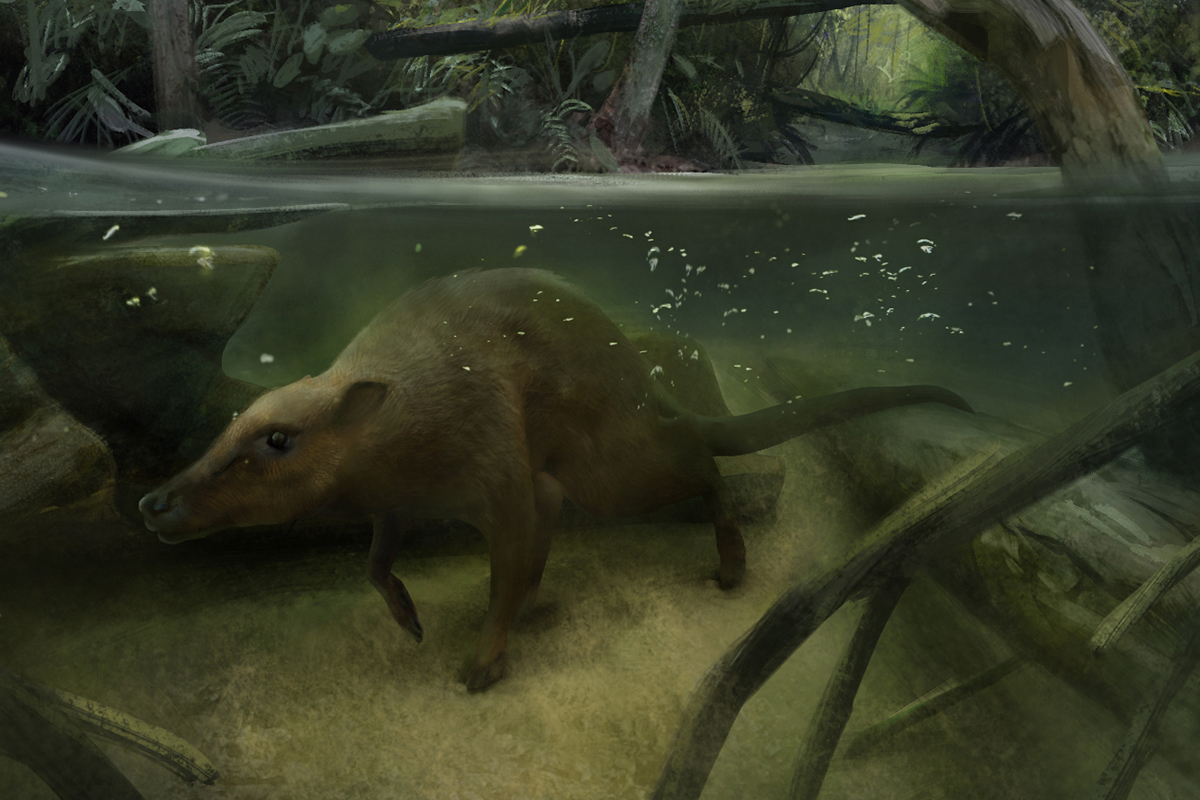 Indohyus underwater
The first step in the evolutionary process, Indohyus had the habits of a mouse deer, a small herbivore that browsed in the undergrowth.
Lucas Lima and Earth Archives 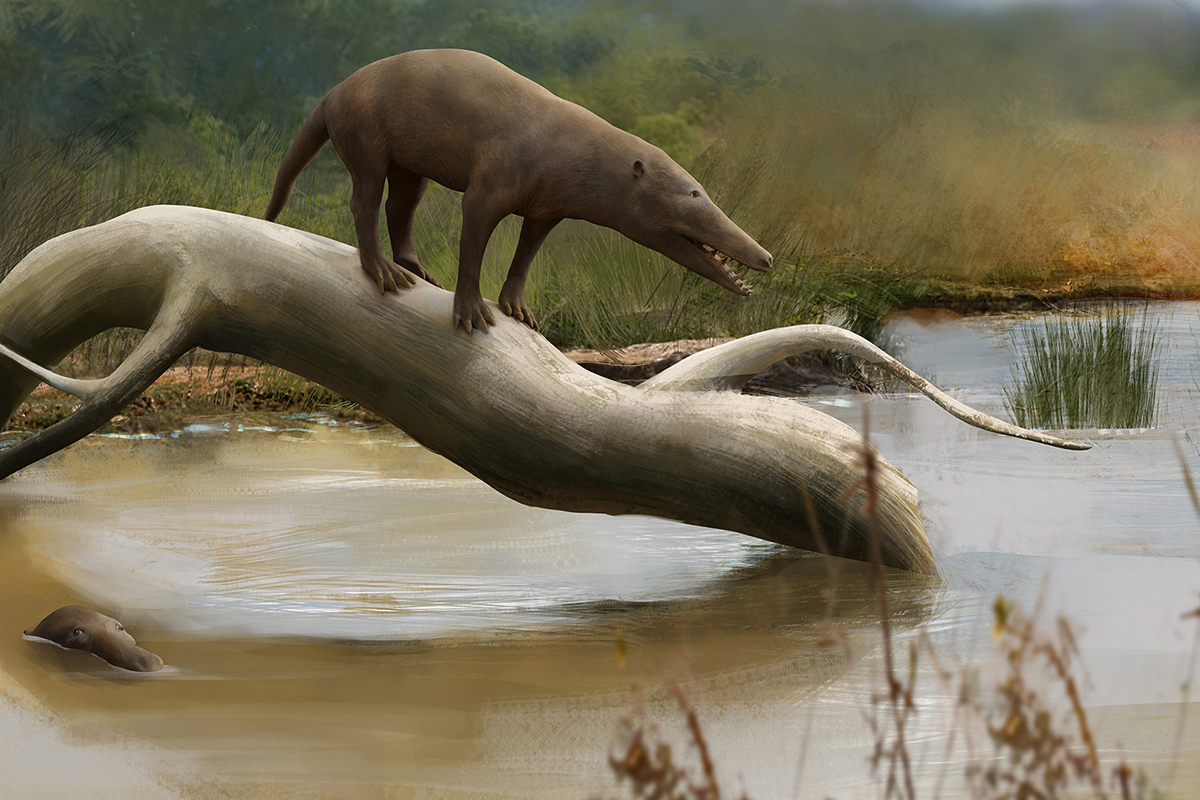 Pakicetus is ready for a swim
Pakicetus, a small predator, was like a bizarre combination of whale and wolf, a mixture that certainly worked.
Lucas Lima and Earth Archives 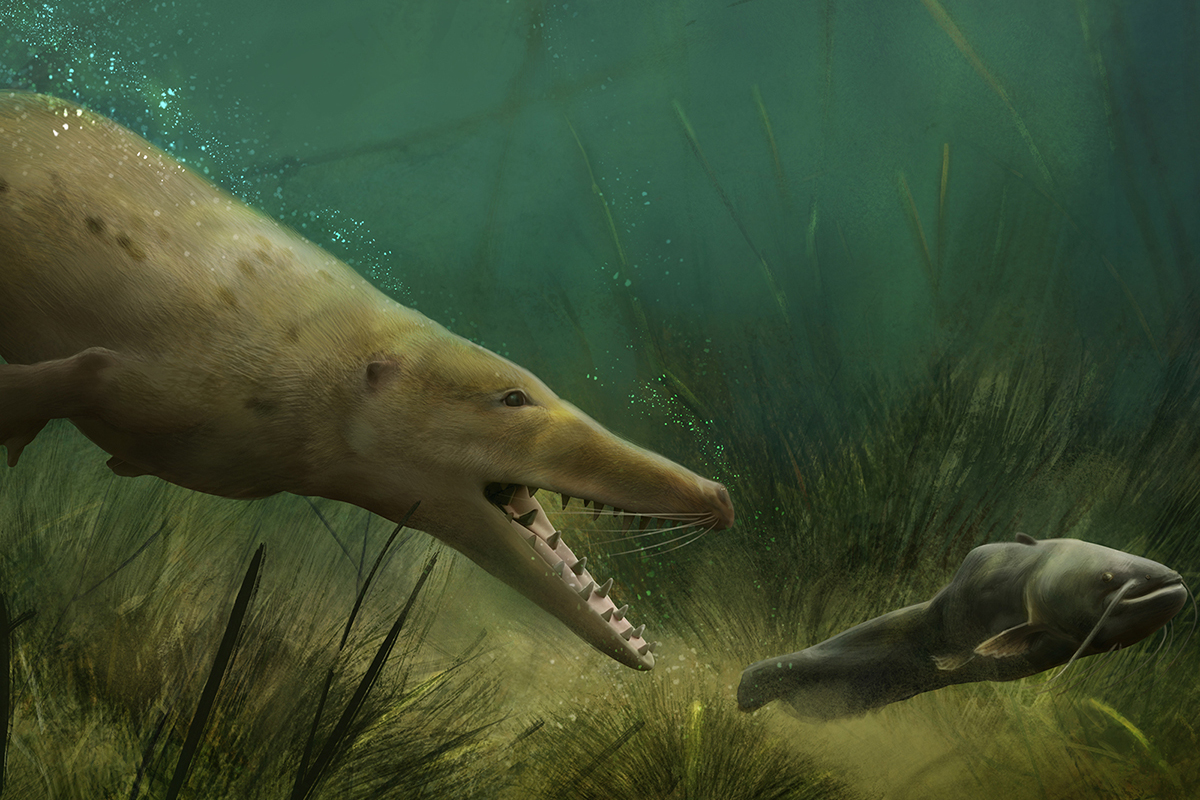 That all changed in the 1990s and 2000s, when a remarkable series of fossils was discovered: intermediate animals showing a mix of land and water features water ancestral to all modern cetaceans (whales, dolphins, porpoises). The relevant fossil record went from non-existent to excellent, and confirmed the molecular biologists’ finding that the closest relatives of cetaceans were indeed the artiodactyls (even-toed ungulates including cattle, deer, pigs, hippos, camels, and giraffe).

Now, so many fossils have been found that it became possible to study evolutionary changes in great detail, allowing an unprecedented understanding of land adaptations evolving into water adaptations. Such evolutionary changes occurred throughout the body. The limbs lost their function in body support, but now had to work as locomotor organs in the new, dense medium. The ears had to change, since sound in water is very different from sound in air. The nose shifted back onto the forehead, to make breathing while submerged easier. The kidneys also changed, since freshwater is not available to drink in ocean living mammals. And all of those changes, and many others, accumulated in short succession. In eight million years, cetacean ancestors went from land mammals to obligate marine swimmers. This early phase in cetacean evolution was characterized by great experimentation. There were crocodile-like whales, otter-like whales, and seal-like whales, and all these body plans were tested and then went extinct, until, in the end, only one body type was left. This is the same body type present in all roughly 90 modern species of cetaceans: a streamlined body with no neck, ending in a horizontally placed triangular fluke, lacking external hind limbs and with paddle shaped forelimbs, with a skin that is mostly devoid of hair, and a nose opening that forms the blowhole on the forehead. However, the traces of the ancestral land mammal ancestors are still retained in cetacean embryos, which have a distinct neck, with a long and narrow tail instead of a fluke, and with hind limbs that protrude from the body. Hairs are common on the faces of small fetuses, and the nasal opening is at the tip of the nose.

With the new fossils and DNA data, molecular biologists were also able to solve Darwin’s vexing problem of what whales are related to. The DNA evidence points to one particular artiodactyl as the closest relative to whales: the hippopotamus. However, the last common ancestor of hippos and whales goes back some 50 million years, and it did not look at all like a hippo or a whale. Fossil evidence indicates that a nimble, deer-like mammal called Indohyus is even more closely related to whales. It is possible that both cetaceans and hippos are derived from Indohyus or a similar species. Indohyus lived near the northern edge of the Indian subcontinent at a time when the Himalayas were just forming, and the Tethys Sea separated the Indian and Asian land masses. It is here that cetaceans originated.

Indoyus was the size of a cat, but proportionally more similar to a deer without antlers. In looks, Indohyus may have been similar to the modern mouse deer of Africa and Southeast Asia. Mouse deer eat fruits and leaves on the forest floor, and like to live near small streams. When they perceive danger, they jump into the water, hiding fully submerged. It is possible that Indohyus lived similarly, and that predator avoidance was the first aquatic behavior displayed by the ancestors of cetaceans. From the chemistry of the teeth, it is clear that Indohyus was a plant eater, and its dense bones suggest that they functioned as ballast, allowing the animal to stay submerged. Aged individuals have teeth that are worn down with use, and that tooth wear is different from that of related plant-eaters. In fact, the tooth wear looks more similar to that of the meat-eating early whales. This is a puzzle that is not solved and maybe Indohyus ate a kind of plant food that required processing by teeth similar to meat. That feature may have helped it as its descendants became meat-eating whales.

The next step on the evolutionary ladder are the first cetaceans, pakicetids. Like Indohyus, pakicetids are only known from Pakistan and India. Even though they are the first whales, they looked nothing like modern whales. Instead, they were more similar to a large dog or wolf. Their fossils are only ever found in rocks that formed in shallow streams, never in the ocean, and it is likely that pakicetids were waders or bottom walkers in these streams. Their dentition indicates that they are meat eaters, and their eyes and ears are located high on the skull, a feature often associated with animals that have a submerged body, but are interested in things that happen out of the water, such as crocodiles spying for terrestrial prey. It is indeed thought that pakicetids were ambush predators, preying on land animals coming to the water to drink, or maybe catching fish trapped in shallow water.

Around 48 million years ago, cetaceans moved toward the ocean. The first known species to do this is Ambulocetus natans. Ambulocetus is known from Pakistan, and only one complete skeleton has ever been discovered. It resembles crocodiles even more than pakicetids, while pakicetids had long limbs that could raise it up on land, Ambulocetus was more sprawling. Ambulocetus’ limbs are short, the tail powerful and the snout long. In spite of the short limbs, the feet are large, and they were probably the organ that these animals swam with. Even though there is an abundance of marine shells associated with the rocks that Ambulocetus is found in, it is also clear that there was freshwater nearby. Ambulocetus was possibly coastal, still taking advantage of thirsty prey coming to drink, but also venturing out in lagoons and the surf. 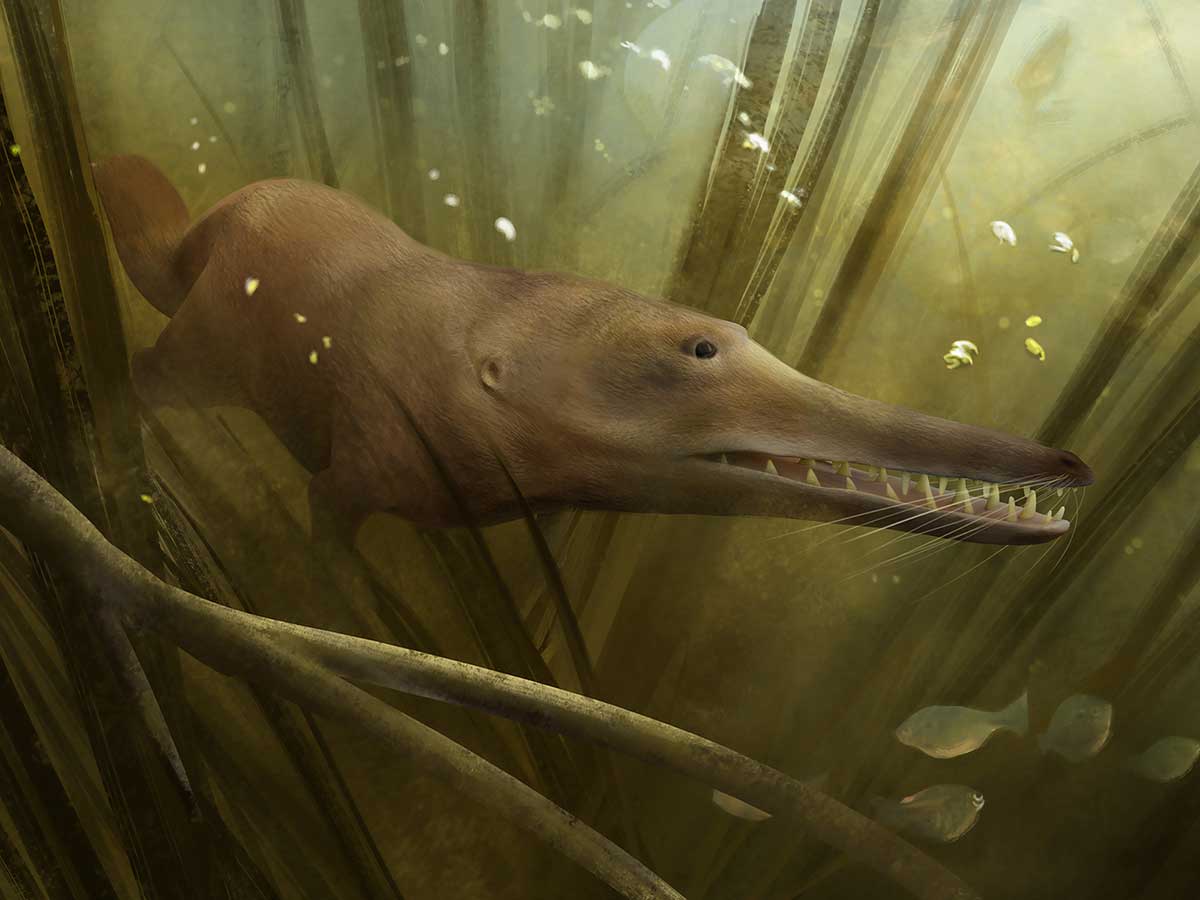 Following pakicetids and Ambulocetus in time as well as on the evolutionary branches leading to modern cetaceans are remingtonocetids, again a family known only from Pakistan and India. The trend toward more aquatic life continues, the limbs are shorter than in the earlier whales, and the tail is long and powerful. The shape of the vertebrae indicates that remingtonocetids do not have a fluke, but the tail vertebrae are somewhat flattened, suggesting that the tail was flat in the horizontal plane. It is likely that they swung this tail through the water in an up-down movement, which is of course the movement that the modern cetaceans make to propel themselves with their triangular fluke. Some other features are also indicative of more aquatic life. The eyes of remingtonocetids are small, suggesting that they were less important in catching prey, and indeed, the rocks that these fossils are found in indicate that many remingtonocetids lived in swamps with muddy water. The placement of the eyes is also unusual. Instead of being located on the top of the head, to see outside the water, remingtonocetid eyes are placed on the side of the head, consistent with hunting aquatic prey. The part of the skull that houses the remingtonocetid ear is large, suggesting that they had excellent hearing. It is likely that remingtonocetids used their ears in prey detection, a feature in common with modern toothed whales.

Protocetid cetaceans lived at the same time as remingtonocetids, but in somewhat different habitats. In addition to South Asia, protocetids also conquered the oceans, and have been found in continents from Africa to South and North America. Unlike the earlier families, this implies that protocetids were able to cross large stretches of water and were thus good swimmers. They are a diverse group, with much morphological diversity. It is clear that some protocetids had a tail similar to that of ambulocetids and remingtonocetids, and it is also possible that some already had a fluke.

Unlike remingtonocetids, protocetids are found in localities that indicate open, clear water, and they had big eyes. Protocetids are also the first whales in which the nasal opening is not near the tip of the snout, it has shifted higher up on the skull, although it is not a blowhole like it is in modern cetaceans. They still had powerful fore- and hind limbs allowing them to come ashore and get around on land, and possibly hauled out for functions related to reproduction, similar to modern sea lions. They may have been the first cetacean pursuit predators in open water. 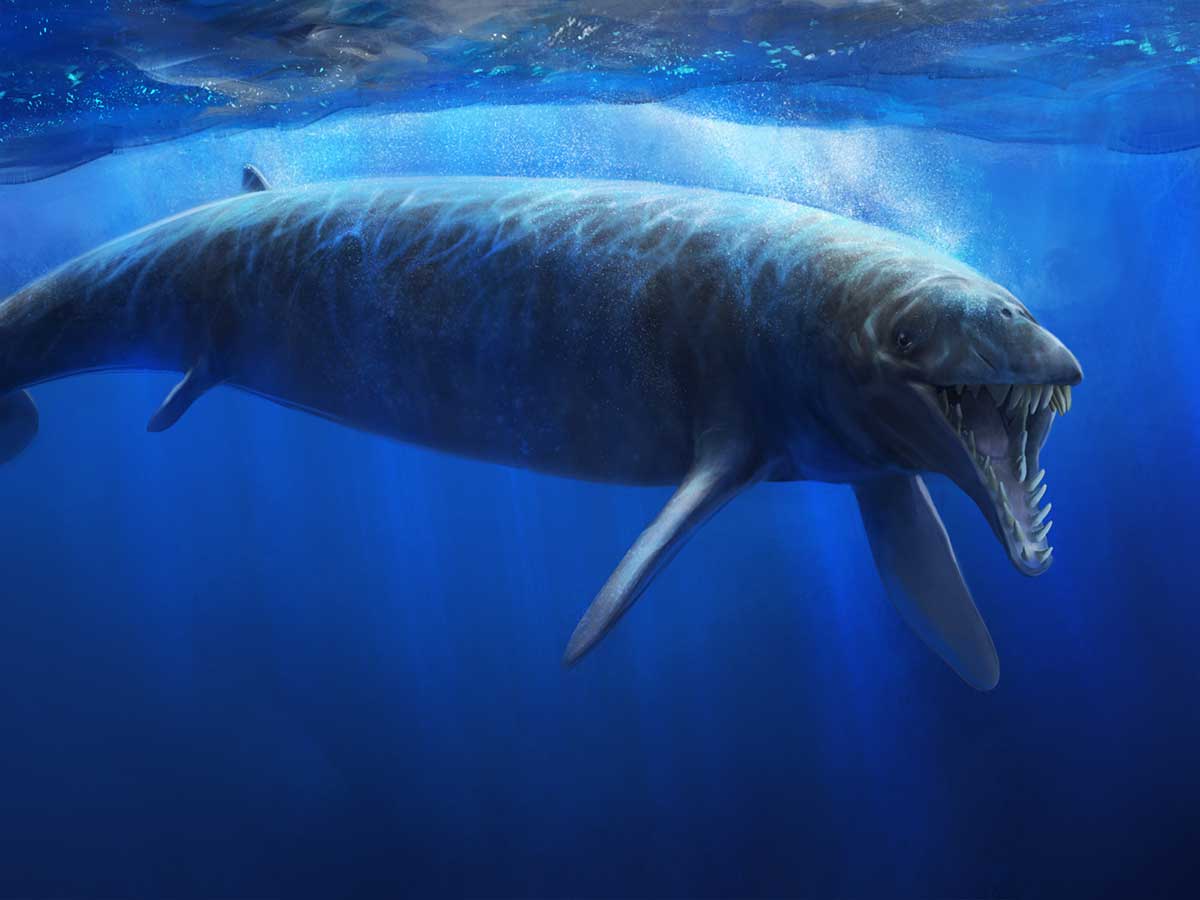 The entire evolutionary sequence, from little Indohyus diving into streams, to modern cetacean-like basilosaurids took about 8 million years. Evolution designed new forms, tried them out, and discarded most of them, until at the end only the modern cetacean body plan remained. It is mind-boggling to think that all the different organs – limbs, ears, nose – had to change all at the same time, and one wonders how the genome changes needed to enable the morphological changes accumulated.

With such a complete fossil record, a rich diversity of modern whales and their embryos, and the powerful new molecular techniques, it may be possible to approach that question. Could it be that some changes in the genome affected several disparate organ systems simultaneously, in fact creating an evolutionary shortcut that created novel morphologies at a high rate? This is an exciting concept. If we are able to identify some genes that are engaged in the development of multiple organ systems and that show consistent differences between cetaceans and other mammals, we may have identified the fingerprints of the process of cetacean origins.

J. G. M. ‘Hans’ Thewissen is the Ingalls Brown Professor of Anatomy at Northeast Ohio Medical University. He is the author of The Walking Whales: From Land to Water in Eight Million Years.