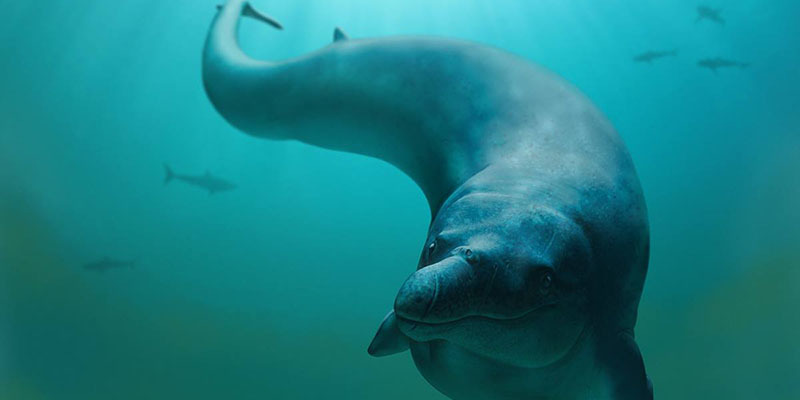 Giant early whale Basilosaurus hunted the calves of other whales

All Posts
Wadi Al Hitan, the Valley of the Whales, is a site that’s yielded dozens of skeletons of the early predatory whales Basilosaurus and Dorudon over the last hundred years. Newly uncovered specimens support the idea that it was a calving ground for the dolphin-sized Dorudon, and that those calves were hunted by the much larger Basilosaurus.

Whales first evolved from land-living mammals related to hippos only 10-15 million years after the mass extinction that wiped out the non-avian dinosaurs and marine reptiles 66 million years ago. By the late Eocene, about 35-40 million years ago, large, fully marine predatory whales were found in all the world’s oceans.

One of the most famous and productive sites known to paleontologists for early whales is Wadi Al Hitan, in the desert sands of Egypt, a few hours from Cairo. Hundreds of bones of basilosaurid whales, manatees, crocodilians, and fish are found there slowly weathering from rocks formed on the floor of the ancient Mediterranean Sea.

Wadi Al Hitan was formed under shallow water near the coast and has been considered a calving ground for the relatively small basilosaurid Dorudon atrox. This is because about half of the Dorudon bones found there come from juveniles, and half come from adults that grew to about 5 meters (18 feet) long. 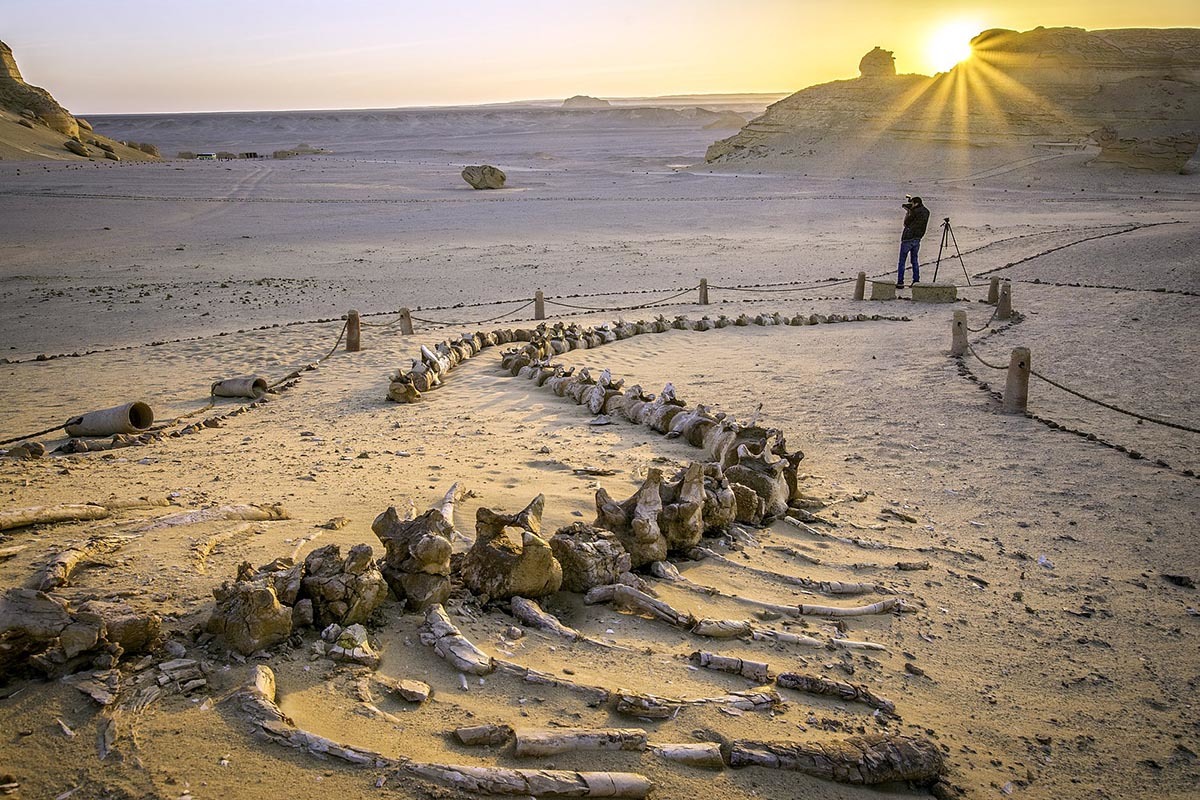 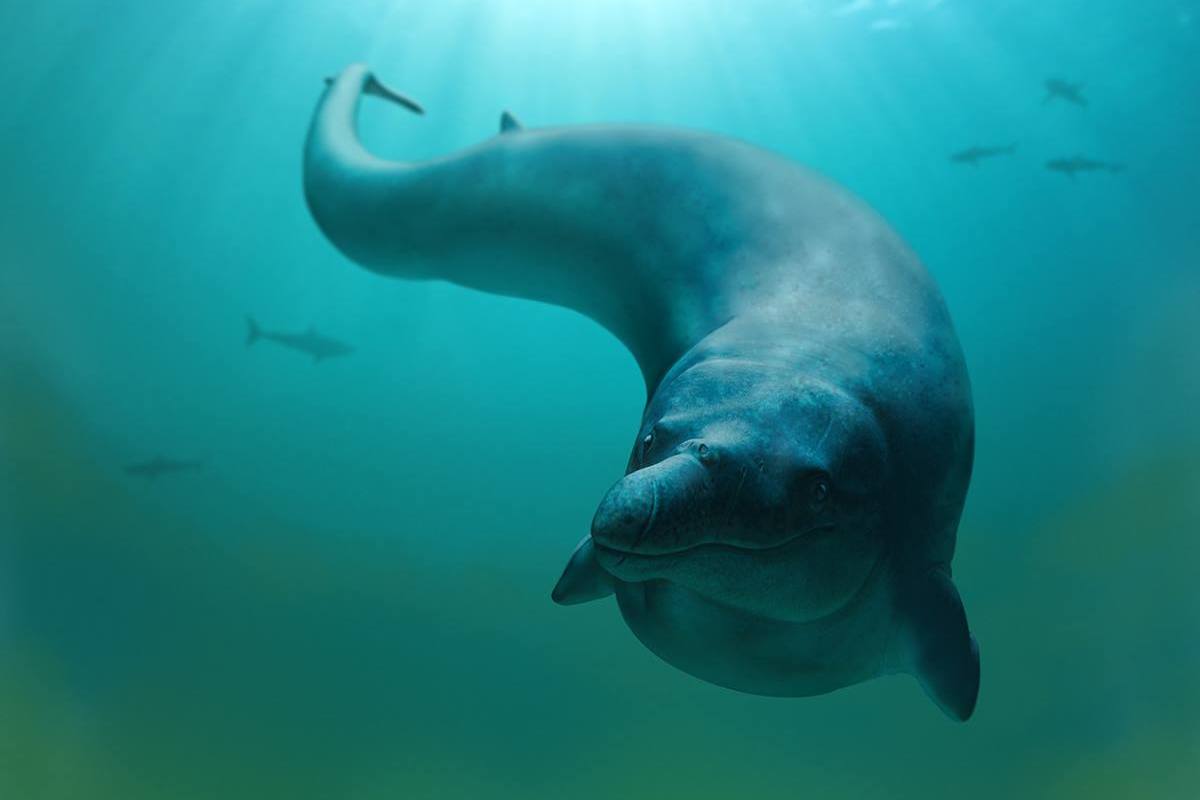 The other basilosaurid known from the site is the family’s namesake, Basilosaurus isis. At Wadi Al Hitan it’s only known from adult specimens which grew much bigger, more than 15 meters (50 feet) long.

Scientists have long though both whale species were predators of fish and other somewhat smaller prey. New research published by Manja Voss and colleagues shows that Dorudon and Basilosaurus weren’t just kin and neighbors, but that that Basilosaurus was actually hunting young Dorudon at their calving ground.

The evidence comes from a newly discovered skeleton of Basilosaurus interpreted as a “whale fall,” an adult carcass that sank to the ocean floor more or less intact. This specimen is the first known Basilosaurus with stomach contents and includes bones from at least two young Dorudon, as well as remains of a large clam-eating fish known as Pycnodus.

The Dorudon remains are found within the Basilosaurus behind its ribcage, are fragmentary, and show bite marks on the skull bones. This all points to them being in the stomach of the Basilosaurus rather than a coincidental association. The bite marks on the skulls are particularly important, and have been previously described in other young Dorudon remains from the area.

Living orcas hunt very young humpback whale calves and target their bites on their heads. Voss and colleagues concluded that Basilosaurus must have been hunting in a similar way due to the similar bite marks on the young Dorudon.

Basilosaurus was the first air-breathing apex predator of the oceans after the Cretaceous-Paleogene mass extinction wiped out the mosasaurs and plesiosaurs 66 million years ago. In addition to being known from Egypt, Basilosaurus is also known from the Gulf Coast of the United States and may have been found in all the world’s oceans like most large whales today.

Additionally, it was the first among a number of different whales that took on the role of an apex predator. Later examples include the sperm whale relative Livyatan which lived about 10 million years ago and the living orcas which are kin to dolphins and porpoises.

Wadi Al Hitan still has untold numbers of whales locked in sandstones, and additional finds will surely increase our understanding of this early whale community.