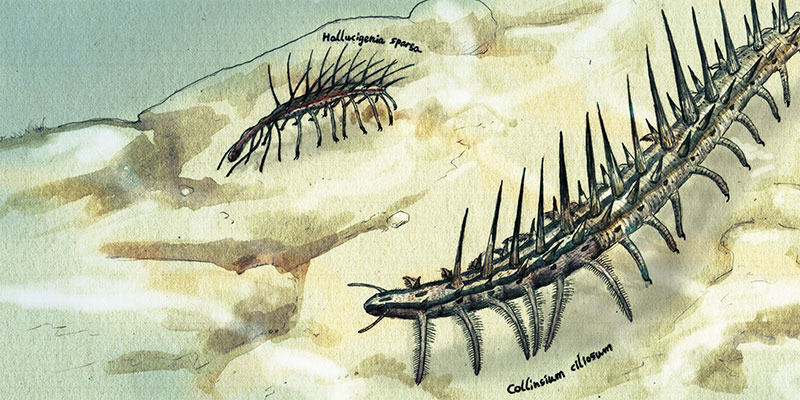 All Posts
On the scale from normal to weird, a little worm called Collinsium is off the charts. Hailing from the Cambrian Period of China, it joins a strange menagerie of sea life from long ago.

About 540 million years ago, a tremendous radiation of new species called the Cambrian Explosion began. From what we know of the fossil record, life started to get very interesting around this time. In places around the world, such as the Burgess Shale of Canada, bizarre creatures can be found hiding as fossils inside the rocks. They were generally soft-bodied animals that typically don’t fossilize well, but the state of their preservation is incredible. Paleontologists have found animals with five eyes, predators with a disc-like mouth and relatives of modern-day velvet worms with long spines on their backs.

Hallucigenia, a velvet worm relative with large spikes on its back, has been the poster child for the bizarre evolutionary extremes of the Cambrian Explosion. Paleontologists recently discovered that they’ve been reconstructing Hallucigenia incorrectly after finding the very first head of this animal, complete with eyes and mouth.

Now scientists have discovered an even more bizarre velvet worm relative from China called Collinsium. While not a very big animal, Collinsium certainly boasted some rather intimidating features. It has 72 spikes running along its back, nine pairs of rear legs with claws and perhaps to balance out the armor it had six pairs of feathery front legs.

Today’s velvet worms are quite a different bunch of animals. They typically live on land, in tropical forests, and prey on other insects by shooting sticky mucus. They do, however, have rows of legs just like their Cambrian relatives.

Who knows what other oddities from the Cambrian are lurking in rocks around the world.


Related Stories
When jellies had spiky skeletons and no tentacles
The alien world of the Burgess Shale
Oldest example of a caring mother found in Canada
Burgess Shale animal clapped its feathery arms during feeding
Ice cream cone with a trapdoor finds its place on the Tree of Life
//sulc.us/oikyk
/articles/tank-worm-with-superarmor-found-in-china/