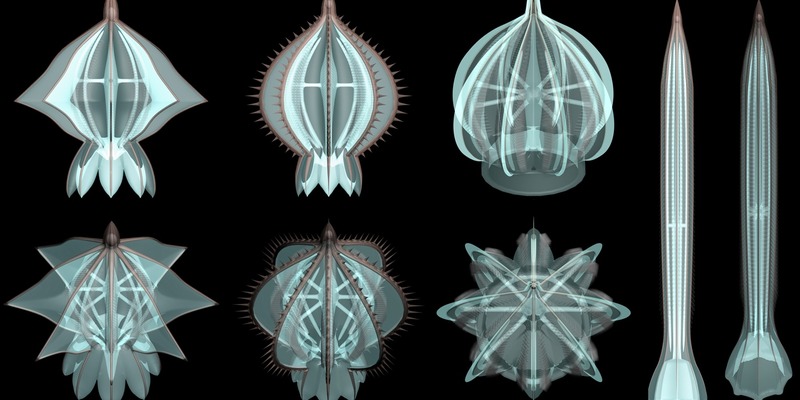 When jellies had spiky skeletons and no tentacles

All Posts
Modern comb jellies are jellyfish-like invertebrates that look like floating plastic bags and often sport trailing tentacles. But their prehistoric relatives traded their arms for heavy armor.

The gelatinous comb jellies are members of the phylum Ctenophora, meaning “carried by combs.” These gelatinous animals are the biggest organisms that swim by moving cilia, hair-like structures lining the walls of their bodies. Though they aren’t true jellyfishes, the similarity is uncanny. Comb jellies are at least 95% water, have no complex nervous system and usually bear tentacles for ensnaring prey. But their 520-million-year old relatives were very different.

Fossilized imprints from the Cambrian period found in China show that these ancient comb jellies coupled the usual features of the group, like the characteristic cilia, with unique structures such as bony plates, rods for internal support and spikes for protection. These invertebrates actually had a skeleton.

Gelatinous soft bodies aren’t often preserved and fossils of extinct comb jellies have always been rare. Paleontologists long suspected that ctenophores from previous eras were just as boneless as their modern counterparts, but the Chinese findings show that’s not the case.

Interestingly, these jellies are not the first armored animals to be found from this period of Earth’s history. The Cambrian is famous for the number of heavily protected creatures like trilobites, lobopodians and other mysterious organisms. It seems that this age was one of intense competition and predation, forcing animals to evolve various attributes to avoid being eaten.

Almost as peculiar as the presence of skeletons in ancient comb jellies is the absence of tentacles. Most ctenophores today have tentacles for feeding that, instead of stinging prey like those of jellyfishes, are full of sticky cells. However, a few species don’t have them, and instead use fleshy lobes to surround their targets until they’re close enough to the mouth to be consumed. The researchers speculate that the skeletonized jellies ate in much the same way.


Related Stories
Tank worm with ‘superarmor’ found in China
The alien world of the Burgess Shale
Oldest example of a caring mother found in Canada
Burgess Shale animal clapped its feathery arms during feeding
Ice cream cone with a trapdoor finds its place on the Tree of Life
//sulc.us/dn57c
/articles/ancient-jellies-had-spiny-skeletons-no-tentacles/