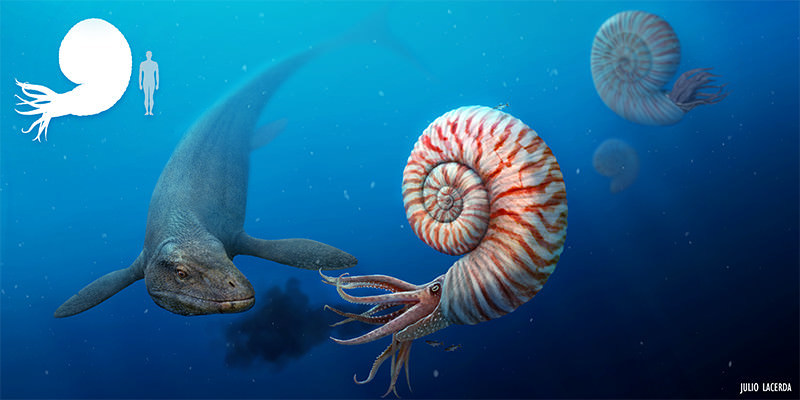 Shelled krakens of the Mesozoic deep

All Posts
Ammonites existed all over the world's oceans between 400 and 66 million years ago. Some reached immense sizes. The biggest of their kind, Parapuzosia, were the veritable krakens of the ancient seas.

To most casual paleontology enthusiasts, ammonites are all pretty much interchangeable coil-shelled mollusks that were somewhat related to the modern chambered nautilus. Like a nautilus, ammonites had a living chamber in their shells, and a set of tentacles to ensnare their intended prey. Unlike nautiluses however, the aptychus or shell-closing mechanism of an ammonite did not form a cap over the shell. Instead these aptychi were positioned on the lower jaw of the animal.

As a group the ammonites were highly successful, and existed throughout the Mesozoic era. The ammonites appeared long before this time began, and disappeared when the end-Cretaceous extinction killed the dinosaurs off. These mollusks were highly ubiquitous, existing freely around the world's oceans.

Some ammonites reached immense sizes during their tenure of more than 340 million years. To date, the biggest ammonite of all and perhaps one of the largest and heaviest of all mollusks is the imposing giant Parapuzosia seppenradensis. 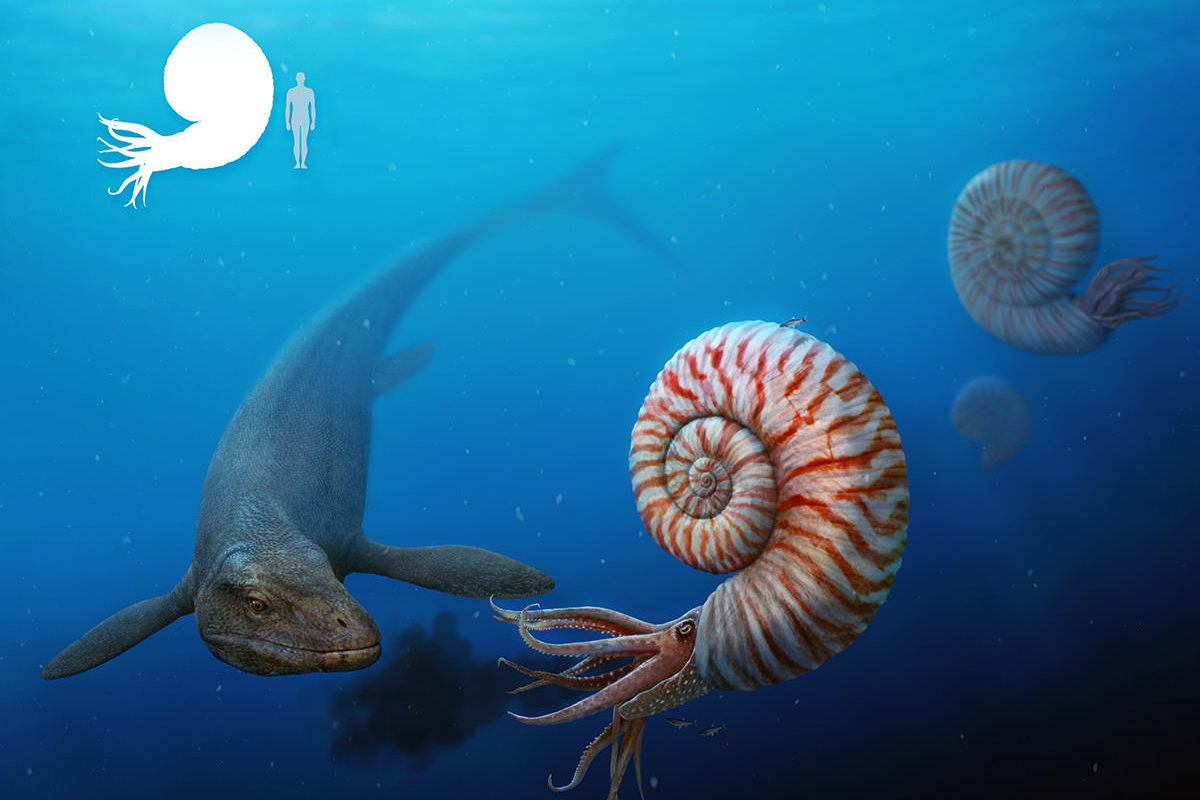 Kraken versus leviathan
A Parapuzosia defends itself against an attacking Mosasaurus.
Julio Lacerda

This massive creature, found mostly in the Western Hemisphere, is known from many medium-sized to large species. The holotype, or first fossil, is known from the German locality of Seppenrade, in the country’s Coesfeld district. These first-known specimens are now displayed in the Westfälisches Museum für Naturkunde in Münster.

Originally Parapuzosia was included as part of the well-known and wide-ranging genus Pachydiscus, a medium-sized ammonite. It was first named on the basis of German specimens as Pachydiscus seppenradensis in 1895 by paleontologist Hermann Landois. It was renamed later in 1913. Parapuzosia belonged to a large family of fast-swimming, active and carnivorous ammonites called the Desmoceratidae. Fossils have been found all over Europe, with gargantuan shells turning up in the Late Cretaceous rocks of Germany, Bulgaria and several others areas.

Another species called Parapuzosia bradyi was found later in North American rocks, living in the Western Interior Seaway that covered the continent at the time. Parapuzosia is a very heavily built creature with a huge shell reaching more 2.55 meters in diameter in the largest species, the mighty European P. seppenradensis. According to a paper in 1898 by Hermann Landois, a weight estimate of 1.4 tons was published. In ammonites, it was the females that were the larger, with a possible maximum estimate of 3 meters in diameter.

The Landois study also measured several other valuable pieces of information about the animal. For one, the creature's huge shell had roughly 700 liters of air to keep it buoyant in the water. This buoyancy technique is also used by modern nautiluses to stay afloat, while the creature living in the shell was roughly 751 kilograms in weight. This makes it one of the heaviest and most imposing cephalopods ever in existence. It is probable that Parapuzosia and all other ammonites had siphons like today's cephalopods to jet-propel themselves through the water and adjust their angle and turn at a greater speed.

The North American species is much smaller, with an incomplete specimen showing a possible diameter of 1.37 meters. Still P. bradyi itself is among the biggest of the American ammonites from the famous Western Interior Seaway. Others were found in North America too, such as the Texan P. bosei and P. americana, both of which were similar in diameter to Parapuzosia bradyi.

Despite its large size and possible predatory prowess, Parapuzosia still lived in a sea full of predators. Among the deadliest marine animals of the time were the mosasaurs, especially the famous European genus Mosasaurus hoffmannii. These whale-like marine lizards could reach 18 meters at maximum and had jaws for crushing and cutting through their prey. Whether or not any mosasaurs preyed on adult giant ammonites however is uncertain, even though younger ones might have been eaten. Other animals from Europe’s shallow seas include sharks, marine turtles, fish, squid and other mosasaurs. All of them would have made prime targets for a huge hunting Parapuzosia.