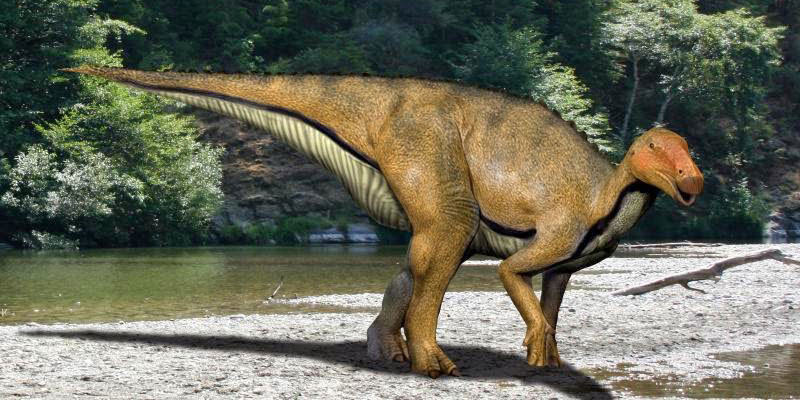 All Posts
A brand new herbivorous dinosaur called Koshisaurus has been unearthed in Japan. It is only the sixth named species of dinosaur ever discovered on the archipelago.

Scientists have just added a sixth unique dinosaur to the paleontological record of Japan. Called Koshisaurus katsuyama, it is a plant-eating dino from Fukui Prefecture.

Koshisaurus is a member of the Iguanodontia, a group of herbivorous dinosaurs that contains the popular duck-billed dinosaurs (hadrosaurs) and the famous spike-thumbed Iguanodon. The discovery of five bones includes an upper jaw with 13 teeth. The unique teeth led scientists to classify it as a new species. It was a juvenile around 10 feet long.

While the country is basically is a chain of volcanic islands, there are some small areas of sedimentary deposits, the kind of rocks where fossils are typically found. Fukui Prefecture is one of those areas.

The rocks of Fukui are from the Cretaceous Period, dating back to 120 million years ago when Japan was attached to the eastern edge of what is now Asia. Koshisaurus joins the ranks of the carnivorous theropod Fukuiraptor, the sauropod Fukuititan and the fellow iguanodontian Fukuisaurus, all found in this area.

Its name comes from the old Japanese word Koshinokuni referring to the region in which it was found, while Katsuyama is the city where it was unearthed.


Related Stories
Lurdusaurus, river dinosaur of the ancient Sahara
Sail-back dinosaur got flashier with age
A specimen of the dryosaurid Valdosaurus has been discovered on the Isle of Wight
Second hump-nosed spike-thumbed dinosaur discovered in Mongolia
Plant-eating dinosaur had huge chisel-shaped teeth
//sulc.us/5d4ww
/articles/new-plant-eating-dinosaur-species-found-in-japan/