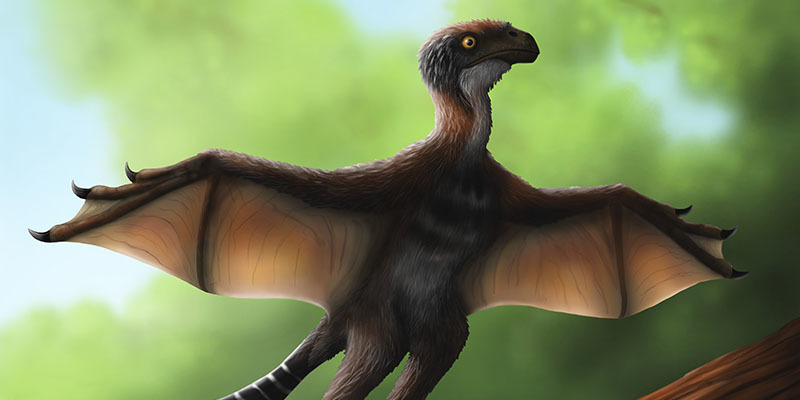 Bat-winged dinosaurs: We used to think they were just long-fingered weirdos

over 1 year ago by Kristin Hugo

If you were to go back in time to the Middle/Late Jurassic of China, you may see some ferocious, enormous dinosaurs towering above you. But you wouldn’t have to face giants to see dinosaurs in just about any niche around you. If you retreated to the forest and waited quietly against the trunk of an evergreen, you may spot the movement of the tiny, tree-dwelling Ambopteryx longibrachium.

Imagine Ambopteryx perched in a tree, its fuzzy body a little shorter than a bowling pin, with long, skinny tail feathers falling below the branch. It lazily stretches out its arms, and between its extended fingers you can see sunlight muted through thin flaps of skin. Then the skin flaps, called patagia, stretch between the fingers, over a rod protruding downward from its wrist, called the styliform element, then continue to attach to its torso. The creature almost resembles a feathery bat with a long neck and pointy nose. The animal looks up, then launches itself from the bough, disappearing swiftly into the pines.

This is how we imagine Ambopteryx, the dinosaur discovery announced earlier in May, in a study published in the journal Nature. Ambopteryx is similar to its close relative Yi qi, which stunned the paleontology community when it was announced in 2015. Both animals are likened to dragons as bat-winged dinosaurs: feathered, but not birds, and not on the evolutionary timeline that would lead to modern birds either.

However, this is not how we’ve always envisioned members of this dinosaur family, called scansoriopterygids. In 2002 and 2008, paleontologists announced the discovery of the first two members of this family: Scansoriopteryx and Epidexipteryx respectively. Having seen no evidence that these creatures had wings, they were instead described as having bizarre, lengthy fingers, extending from their hands like spindly spider legs capped with claws. 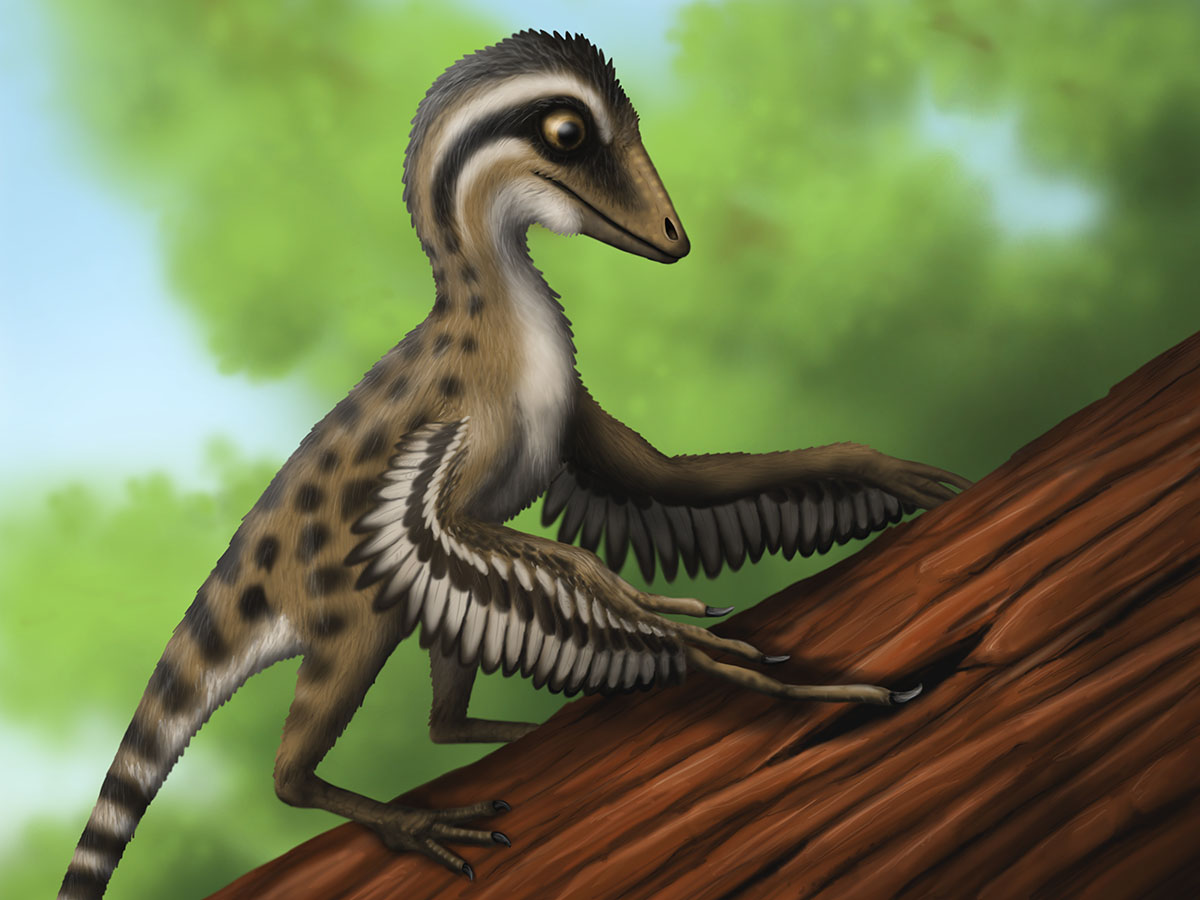 
This interpretation was generally accepted as the most accurate that artists could come up with at the time. It was so striking that it made it into National Geographic’s “Bizarre Dinosaurs,” a series including a magazine cover story, a TV series, and a book describing the strangest bodies of the dinosaur world. Aside from the tall sails and spines of Spinosaurus and Amargasaurus and the strange headgear of Dracorex, an artist depicts a scansoriopterygid as one of the weirdest. The reconstruction of Epidendrosaurus, now considered a synonym of Scansoriopteryx, shows it reaching out its spindly, caliper-like fingers like some sort of sinister movie monster.

At the time, paleontologists suspected that the animals used their long fingers to climb trees, or to grasp food like the long-fingered modern primate, the aye-aye.

“This was actually a good hypothesis, brought up in 2002 when the first scansoriopterygid had been found,” said Dr. Wang Min, lead author of the Ambopteryx study and vertebrate paleontologist at the Chinese Academy of Sciences. “Back then, we didn’t find any dinosaurs with such a long digit. So we have to draw some reference from other living animals like the primates.”

However, not everyone was sold on this interpretation. Way back in 2008, vertebrate paleontologist Andrea Cau discussed the concept of winged scansoriopterygids with paleo artist Lukas Panzarin, who agreed that the idea was plausible. Cau published a blog post about the idea, as well as a speculative drawing of the animal, on his paleontology blog Theropoda.

“I am not sure if my hypothesis was taken seriously by other paleontologists before the discovery of Yi,” Cau said. “I mean, I never published such ideas in a peer-reviewed paper, and they were just plausible speculations in a blog...I've always assumed that only the discovery of actual fossils like Yi and Ambopteryx could validate such speculations.” In 2012, the book All Your Yesterdays included a reference to Cau’s interpretation, and a drawing of "A Scansoriopterygid with Wings." The authors described the illustration as “a truly bizarre beast, and this pterosaur-mimic reconstruction has to be appreciated as food for thought rather than a genuine hypothesis." 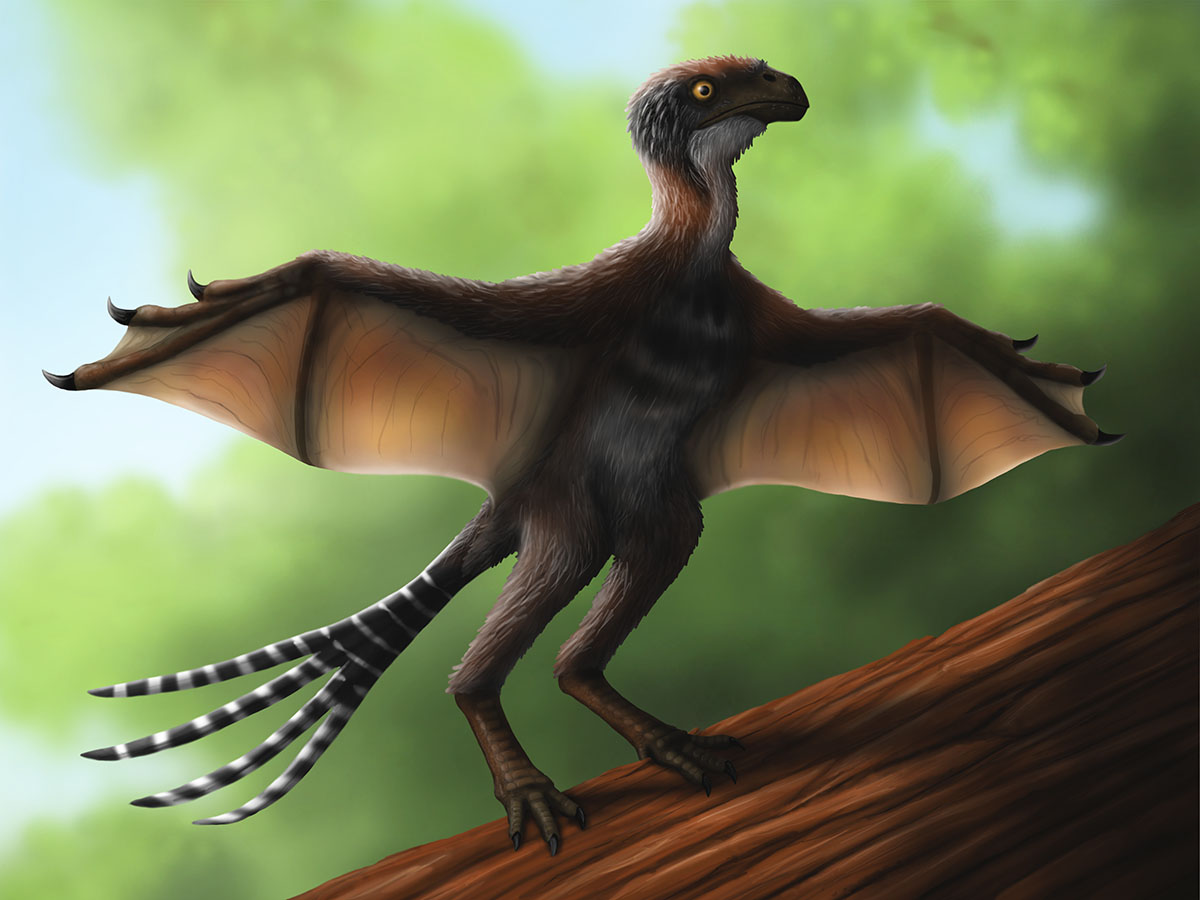 A new reconstruction of Ambopteryx with its bat-like wings. Image by Nathan E. Rogers.


The fossils of Scansoriopteryx and Epidexipteryx didn’t include any evidence that they flew, but, Wang explains, that doesn’t mean that they didn’t. Because the animals were not as well-preserved as Yi and Ambopteryx, the first discovered members of the family didn’t show the flaps of skin between their fingers and arms. Furthermore, they were so young when they died that the rod protruding from the wrist hadn’t yet turned to bone. Thus, the evidence of their wings was not preserved. Still, the wings of Yi and Ambopteryx suggest that the entire family had similar characteristics. “I would say that for this whole clade, the scansoriopterygids,” Wang explains, “It’s likely that those dinosaurs all had membrane wings.”

Now, Cau’s interpretation is vindicated as the most likely reality for this family. “As a paleontologist, it is a great emotion when you [suggest] an intriguing explanation for a very bizarre fossil, an explanation that you see as ‘working’ very well and fitting with several enigmatic elements of that creature,” Cau says. “And then, many years later, new fossils confirm your ideas. It was an amazing day for me, when Yi was published.”